The Reading Crusader was a streamlined stainless steel passenger train launched by the Reading Railroad on December 13, 1937. The five-car trainset was manufactured by the Budd Company, and featured observation cars at both ends. The train operated between Jersey City, New Jersey and Philadelphia, Pennsylvania on a twice a day, round-trip schedule.

Two G-1sa Pacific-type 4-6-2 locomotives originally built in 1918, with tenders, were streamlined with fluted stainless steel panels to match the Budd cars. The tenders were rebuilt with a wrap-around shroud so that the rounded observation cars transitioned smoothly between the tender and the rest of the train. The streamlining increased the weight of the locomotives by 12 percent (almost 33,000 pounds), providing more traction and less slippage.

The Crusader would run ninety miles between Jersey City and Philadelphia in 90 minutes, averaging 60-mph. Additional time would be saved by the train being double-ended. Turning the entire train at the terminal was unnecessary as only the locomotive would have to be turned. Car seats would then be reversed for the trip back.

In 1948, two EMD FP7A diesel-electric engines replaced the two streamlined steam locomotives. Both steam engines had their streamlining removed and were placed on other assignments. In 1950 the two Pacifics were retired and replaced by more EMD FP7A diesels.

Reading No. 117, one of two streamlined Pacific locomotives. 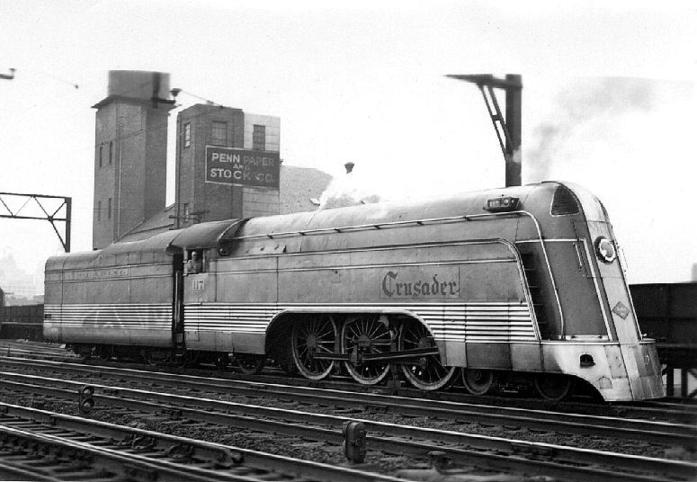 A Postcard rendition of the Reading Railroad's streamlined Crusader.