Design
The T-1 class was designed by a consortium of the Reading Company's superintendent of motive power and rolling equipment, E.P. Gangewere and a team of engineers at the Baldwin Locomotive Works. The class was the brainchild of Reading Company President Revelle W. Brown, who had previously been President of the Lehigh Valley railroad. During his tenure on the Lehigh Valley, Brown had been thoroughly impressed by the road's 4-8-4 "Wyoming" locomotives. Upon becoming President of the Reading Company, Brown wanted a similar class of locomotives to replace the 2-8-0s, 2-8-2s, and 2-10-2s which handled the majority of freight traffic on the Reading system.

The T-1 class were built between 1945 and 1947 at the Reading Company's main locomotive shop in Reading, PA, using the boiler, firebox, and several other components of thirty existing I-10sa class 2-8-0s. The main reason for this was that the War Productions Board had outlawed the design of new locomotives, but allowed them to be rebuilt and modernized.

To fit the new cast steel engine beds supplied by General Steel Casting Corporation, the boiler was lengthened. This was done by replacing the first two boiler courses and adding a 187-inch extension in addition to adding a new 111-inch smokebox. The firebox was modified by adding thermic syphons and a combustion chamber.

Roller bearings supplied by Timken or SKF were used on the four wheel pilot and trailing trucks as well as the six wheel tender trucks. The first 20 examples, (2100-2119) used friction bearings on the eight driving wheels, while the final 10 (2120-2129), intended for both freight and passenger service, had roller bearings throughout. The driving wheels themselves used the Boxpok design with a diameter of 70 in.

Service
The T-1 class entered service between 1945 and 1947 and were used primarily in fast freight service. Their operating territory encompassed most of the Reading system and they were frequently used in pool service with the Western Maryland Railway and became the basis for that road's "Potomac" class of 4-8-4s.

Assigned to freight service, the "T-Hogs" as they were affectionately known, primarily saw use on time-sensitive mixed freights as well as coal trains and also saw use in pusher service. In regular service, the T-1s were cleared to pull trains up to 150 cars in length, but were capable of pulling at least 200.

Despite being assigned to freight service, the T-1s were capable of powering passenger trains if needed, and the last 10 were equipped with steam heating for this purpose. In actual service however, the T-1s rarely handled passenger trains outside of post-World war II troop trains.

Iron Horse Rambles
Starting in 1959, the Reading Company began operating a series of excursions throughout its system using four of the T-1s. The first Ramble, pulled by T-1 2124 ran between Wayne Junction in Philadelphia to Shamokin. Five T-1s were held by the Reading for the Iron Horse Rambles: 2100, 2102, and 2124 would be used to pull the excursions, 2101 would be kept as a backup, and 2123 was used as a source of parts and eventually scrapped.

The Iron Horse Rambles lasted until 1964, after which, the three remaining T-1s were sold off (2124 had already been purchased by F. Nelson Blount in 1962 for his Steamtown U.S.A collection in Bellows Falls, VT).

Preservation
All four of the T-1s used in the Iron Horse Rambles survive and are the only remaining examples of the class.

2100 was sold to Streigel Equipment & Supply of Baltimore, MD and spent a decade in the firm's scrapyard until 1975, when it was purchased along with sister 2101 by Ross Rowland to be used as a source of spare parts for the former for his American Freedom Train. After 2101 was damaged in a fire in 1979, 2100 swapped tenders with its sister and was stored in the former Western Maryland Hagerstown, MD roundhouse until 1988 when it was purchased by the then owner of Lionel Trains, Richard Kughn and restored to operating condition. The locomotive spent the next decade moving from place to place with various different owners until it was purchased at auction by Thomas Payne, who moved it to the former New York Central's St. Thomas, Ontario shop, where it was converted to burn oil, with plans to use the locomotive to pull excursions in the Rocky Mountains. These plans never came to fruition and in 2007, 2100 was moved to Tacoma, WA where it briefly ran on the Golden Pacific Railroad's Tacoma Sightseer trains until 2008 when it was placed in outdoor storage in Richland, WA. In 2015, 2100 was leased to the American Steam Railroad Preservation Association and moved to the former B&O roundhouse in Cleveland, OH where it is presently being restored to operating condition.

2101 was also sold to Streigel Equipment & Supply of Baltimore, MD and spent a decade in the firm's scrapyard until 1975, when it was purchased along with sister 2100 by Ross Rowland for use on his upcoming American Freedom Train, and renumbered AFT 1. Restored to operating condition in 30 days, AFT 1 pulled the American Freedom Train throughout the eastern United States before handing the train of to ex Southern Pacific 4449. In 1977, AFT 1 was renumbered 2101 and painted in the Chessie System livery for the Chessie Steam Special, an excursion train to celebrate the 150th birthday of the Baltimore and Ohio Railroad. 2101 ran these trips until 1979 when it was damaged in a roundhouse fire at Silver Grove, KY. The B&O arranged a deal with Rowland and traded their Chesapeake and Ohio 614 for the 2101 cosmetically restored as AFT 1 for display at the B&O Railroad Museum.

2102 was sold to Steam Tours of Akron, OH in 1967 and spent the next eight years running on various fan trips in the midwest and made a brief appearance on the Greenbrier Scenic Railroad running between Durban and Cass, WV. In 1985, 2102 was moved to Reading, PA and purchased by Andy Muller for his Blue Mountain and Reading tourist railroad in Hamburg, PA. 2102 spent the next six years pulling tourist trains on the BM&R as well as occasional off-line trips until its flue time expired in 1991. In 1995, 2102 was moved to Steamtown National Historic Site for a restoration which never occurred and was moved to Port Clinton, PA in 1997 and placed in indoor storage. 2102 is presently stored inside the Reading Blue Mountain and Northern Railroad's steam shop in Port Clinton, PA out of public view, though is brought outside for display on occasion. In January 2016. Reading Blue Mountain and Northern started a mechanical evaluation on the locomotive to see if it is restorable, and on January 21, 2016 announced the locomotive would be returned to service in mid-2017.

2124 was purchased by New England seafood magnate and steam locomotive collector F. Nelson Blount in 1962 for static display at his Steamtown, U.S.A. museum in North Walpole, NH. In 1965, 2124 was moved to Steamtown USA's new location in Riverside, VT. In 1984, 2124 along with the majority of the Steamtown collection was moved to Scranton, PA. In 1986, ownership of 2124 was transferred to the United States National Park Service along with most of Steamtown, U.S.A's assets as part of the new Steamtown National Historic Site. Today, 2124 is on static display at Steamtown. 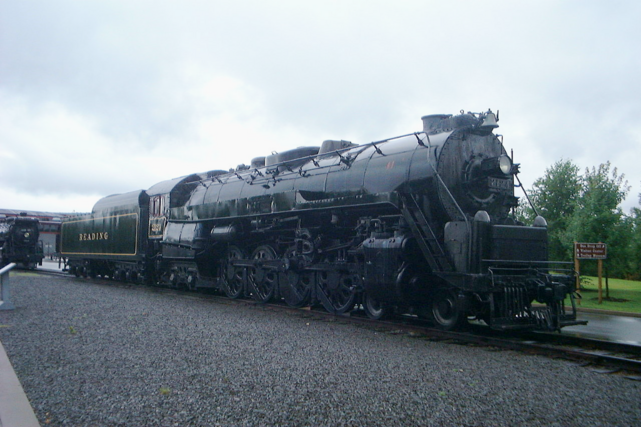 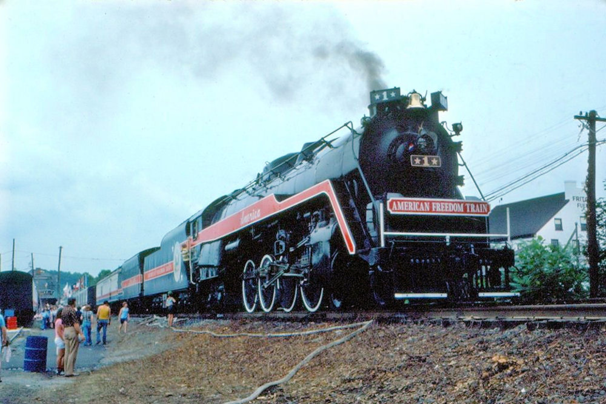 Reading T-1 No. 2124 on display at Steamtown, Scranton, Pennsylvania.