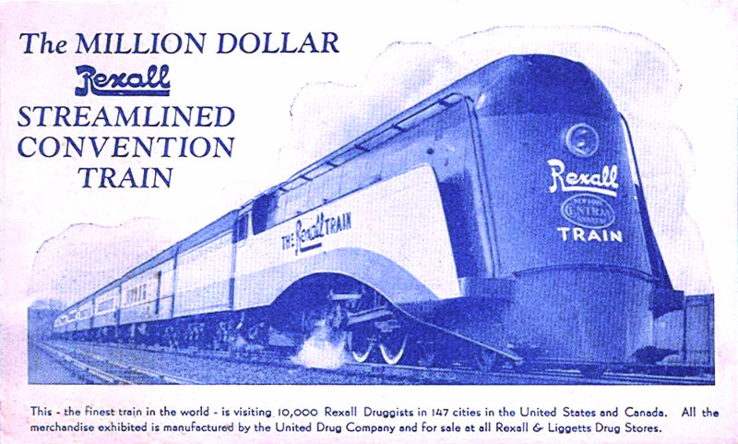 The styling of the Rexall Train's streamlined locomotive was almost identical to the NYC's Commodore Vanderbilt. 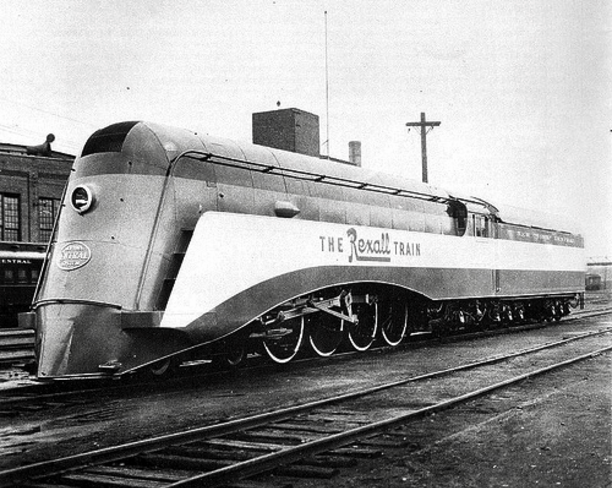 Postcard photo of the Rexall Train which traveled North America in 1936. Rexall was a chain of pharmacies in the United States and Canada. Since the effects of the Depression were still being felt by many people, the company's president had an idea to have a traveling Rexall convention instead of the traditional meeting in one place, which would save the attendees travel expenses. The train's stops were where its local conventions would meet; the public could tour the 12 car train, which had displays of Rexall products as well as meeting areas via a free ticket from a local Rexall store. The train was leased from the New York Central Railroad and its locomotive was a streamlined 4-8-2 "Mohawk" type.

The Rexall Train tour was a fantastic success, with some cities seeing over 2,500 visitors per hour.

The Million Dollar Rexall Streamlined Train
The Rexall Train toured the United States and Canada from March to November 1936 to promote Rexall drug store products, and to provide the equivalent of a national convention for local Rexall druggists without the cost of travel. Free tickets for locals to see displays of Rexall products were available at local Rexall drug stores. The 29,000 mile tour visited 47 of the 48 contiguous states (omitting Nevada) and parts of Canada. The blue-and-white train of 12 air-conditioned Pullman cars with displays in 4 cars, convention facilities in 4 cars and a dining car was hauled by a streamlined 4-8-2 L-2c Mohawk locomotive from the New York Central Railroad. It was the million-dollar brainchild of Louis Liggett, who traveled in the rear observation car.

In 1903, Louis K. Liggett had persuaded 40 independent drug stores to invest $4,000 in a retailers' cooperative called United Drug Stores, which sold products under the Rexall name. After World War I, the cooperative established a franchise arrangement whereby independently owned retail outlets adopted the Rexall trade name and sold Rexall products. The company was based in Boston, in an area now occupied by Northeastern University.

Liggett decided in 1935 that rather than asking thousands of cash-strapped Rexall druggists to come to a national convention, he could simply take the national convention to them by train. At the time, the economy had not yet recovered, and the acquisition of surplus railroad equipment was an easy task. Twelve heavyweight Pullman cars were quickly converted to exhibition cars, lecture cars, and support cars. The cars received new roofs and diaphragms that made the train the longest streamlined train in use. The locomotive was leased from the New York Central. An aged 4-8-2 L-2c Mohawk, No. 2873, was given a thorough makeover based on the styling of the railroad's own Commodore Vanderbilt, the first streamlined steam locomotive in America, and converted from coal to oil burning just for this train.

The L-2 class was the second development of the Mohawk type for the New York Central with 300 of its various subclasses being built between 1925-1930. These were rather more modern locomotives than the L-1 class, as they were fat-boilered, long-tendered, fitted with feedwater heaters, mostly of the Elesco type and generally mounted in front of the smokebox at the top, which gave them an aggressive, beetle-browed look. The L-2c subclass had somewhat smoother lines with recessed feedwater heaters and cleaned up lines. These locomotives, in fact, looked very close in styling to the Central's fleet of Hudson passenger locomotives. 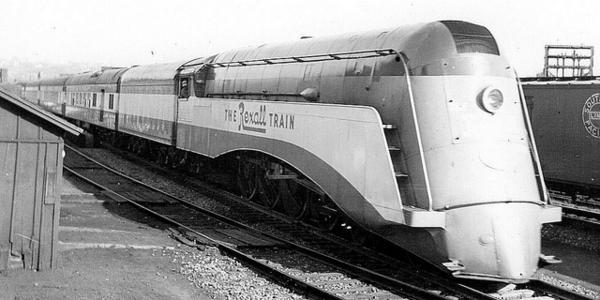