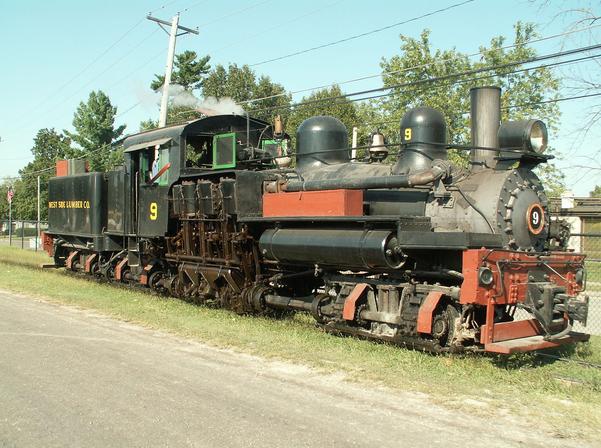 MCRR's three truck class "C" Shay, WSL No. 9, under pressure and parked along the east side of McMillan Park at the close of the 2010 Old Thresher's Reunion in Mount Pleasant, Iowa. 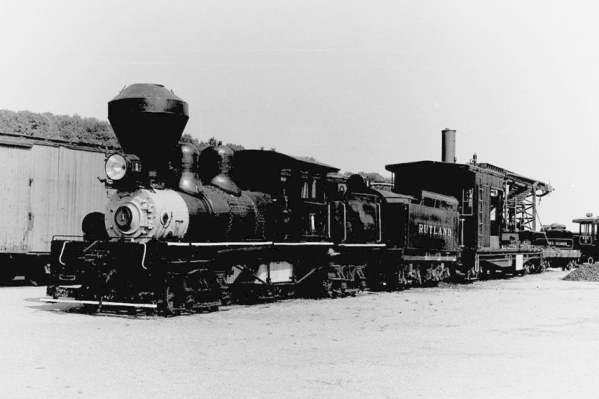 Development
Ephraim Shay (1839–1916), was a schoolteacher, a clerk in a Civil War hospital, a civil servant, a logger, a merchant, a railway owner, and an inventor who lived in Michigan.

In the 1860s he became a logger and wished to devise a better way to move logs to the mill than on winter snow sleds. He built his own tramway in 1875, on 2 ft 2 in (660 mm) gauge track on wooden ties. This was much more efficient than his competitors because he could log all year round.

Two years later he invented the Shay Locomotive. In about 1877 he developed the idea of having an engine sit on a flat car with a boiler, gears, and trucks that could pivot. The first Shay only had two cylinders and the front truck was mounted normally while the rear truck was fixed to the frame and could not swivel, much as normal drivers on a locomotive. He mounted the 3-foot (914 mm) diameter by 5-foot (1,524 mm) tall boiler centered on the car with the water tank over the front trucks and the Crippen's engine mounted crossways over the rear trucks. Shay experimented first with a chain drive from the engine through the floor to the truck axle. It is not known if he powered one or both axles, but he soon found that the chain drive was not practical and he next tried a belt drive. It did not take long for the idea to become popular.

Shay applied for and was issued a patent for the basic idea in 1881. He patented an improved geared truck for his engines in 1901.

Lima Locomotive Works of Lima, Ohio built Ephraim Shay's prototype engine in 1880. Prior to 1884, all the Shays Lima produced weighed 10 to 15 short tons (8.9 to 13.4 long tons; 9.1 to 13.6 t) each and had just two cylinders. In 1884, they delivered the first 3-cylinder (Class B) Shay, and in 1885, the first 3-truck (Class C) Shay. The success of the Shay led to a major expansion and reorganization of the Lima company.[4] When Lima first received the Shay idea it was not impressed, until John Carnes influenced the company to use the idea, resulting in the classic Shay design.

In 1903, Lima could claim that it had delivered the "heaviest locomotive on drivers in the world", the first 4-truck (class D) Shay, weighing 140 short tons (120 long tons; 130 t). This was built for the El Paso Rock Island Line from Alamogordo, New Mexico to Cox Canyon, 31 miles (50 km) away over winding curves and grades of up to 6 %. The use of a two-truck tender was necessary because the poor water quality along the line meant that the locomotive had to carry enough water for a round trip.

Lewis E. Feightner, working for Lima, patented improved engine mounting brackets and a superheater for the Shay in 1908 and 1909.

After the basic Shay patents had expired, Willamette Iron and Steel Works of Portland, Oregon, manufactured Shay-type locomotives, and in 1927, Willamette obtained a patent on an improved geared truck for such locomotives. Since "Shay" was a trademark of Lima, strictly speaking it is incorrect to refer to locomotives manufactured by Willamette and others as "Shays". Six Shay Patent locomotives, known as Henderson-style Shays, were built by the Michigan Iron Works in Cadillac, Michigan.

Overview
Shay locomotives had regular fire-tube boilers offset to the left to provide space for, and counterbalance the weight of, a two or three cylinder "motor," mounted vertically on the right with longitudinal drive shafts extending fore and aft from the crankshaft at wheel axle height. These shafts had universal joints and square sliding prismatic joints to accommodate the swiveling trucks. Each axle was driven by a separate bevel gear, with no side rods.

The strength of these engines is that all wheels, including, in some engines, those under the tender, are driven so that all the weight develops tractive effort. A high ratio of piston strokes to wheel revolutions allowed them to run at partial slip, where a conventional rod engine would spin its drive wheels and burn rails, losing all traction.

Shay locomotives were often known as sidewinders or stemwinders for their side-mounted drive shafts. Most were built for use in the United States, but many were exported, to about thirty countries, either by Lima, or after they had reached the end of their usefulness in the US.

Twenty Class D shays were built. They were no more powerful than Class C, but had greater fuel and water capacity, resulting in improved adhesion. Four Shays were built left-handed, all special ordered for the Sr. Octaviano B. Cabrera Co., San Luis de la Paz, Mexico.

Survivors
Only 118 Shays survive today, some a combination of parts of two Shays. Here is a partial list:

The Yosemite Lumber Company's No. 4 Shay is partially restored and can be seen 24/7 at the Sierra Nevada Logging Museum in Arnold, CA. It worked at the top of the El Portal Incline bringing Sugar Pine logs to the top of the incline, where the loaded rail cars were lowered about 3000 feet in a mile and a half, picked up by a different railroad and taken to the mill.

Restored and on outdoor display available 24/7/365 in downtown Cadillac MI USA for free viewing is a Cadillac - Soo Lumber Company locomotive with tender. The official Michigan historical marker by it explains much.

The oldest operational Shay is located at the Cass Scenic Railroad State Park in West Virginia as their locomotive No. 5. It was first bought in 1905 by the West Virginia Pulp & Paper Co. at Cass. Number 5 is in fact still running on its original rail since it first ran in 1905.

Railtown 1897 preserves a class C Shay, Sierra Railroad No. 2, and occasionally runs it as part of its excursion trains.
The Colorado Railroad Museum holds two Shays, Nos. 12 and 14, which operated on the Georgetown Loop Railroad for about 20 years.

The New Jersey Museum of Transportation at Allaire State Park is currently restoring the 36-inch gauge Ely-Thomas Lumber Company No. 6. This locomotive ran on the Pine Creek Railroad from around 1955 through 2002, when she was taken out of service for boiler work.

Stephen F. Austin State University has a Shay locomotive (s/n 2005 of 1907) on display outside of the Arthur Temple College of Forestry and Agriculture in Nacogdoches, TX.

The Canada Science and Technology Museum owns one operational engine constructed from two locomotives, numbered engines 3 and 4 built for the Merrill & Ring Lumber Co., Ltd and used in their forestry operations at Theodosia Arm on the British Columbia mainland. This Shay is operated by volunteers of the Bytown Railway Society.

Graham County Railroad No. 1925, (Class C, s/n 3256 of 1925), survives at the North Carolina Transportation Museum in Spencer, NC. 1925 is the fastest shay ever recorded, clocked at a speed of 18 mph during "The Great Shay Race" at Railfair '99. It ran at the museum 1997–2005 when the engine needed more boiler work. Since then it has been stored in the roundhouse as a static exhibit, and the universal joints have been removed.

Serial number 3345, a class C Shay built for New Mexico Lumber Co. in 1929, survives at the Hesston Steam Museum in Hesston, Indiana. This was the last narrow gauge Shay built. It was acquired by the LaPorte County Historical Steam Society and moved to the Hesston Steam Museum, where it was damaged in an engine house fire in 1985. It was rebuilt and resumed operation in 2006.

West Side Lumber Company No. 9 (Class C, s/n 3199 of 1923) was purchased by the Midwest Central Railroad in 1966, and with a minor refurbishment in the mid 1990s, continued to operate at their southeastern Iowa location. The locomotive was used during the MCRR's three operating sessions (the Midwest Old Threshers' Reunion, Midwest Haunted Rails, and the North Pole Express). In January 2011, the MCRR and the Georgetown Loop Railway entered into a 7 to 10-year agreement where the 9 has been refurbished by the GLRR staff. It went into revenue passenger service at the Georgetown Loop Railway on July 14, 2012.

Cadillac, Michigan also features a Shay Locomotive in a downtown park, in homage to the city's importance in the locomotive's development and manufacture.

The Illinois Railway Museum, the largest railroad museum in the US, runs a three truck three cylinder Lima built in 1929, a veteran of the J. Neils Lumber Company.

Meadow River Lumber Co. No.1 is the only Shay in the collection at the Steamtown National Historic Site in Scranton, Pennsylvania.

The last production Shay, Western Maryland Railway No. 6 (s/n 3354 of 1945), still operates on the Cass Scenic Railroad. The second largest Shay ever built, this 162 ton Class C locomotive was in service only four years when it was retired and placed in the B&O Railroad Museum. In 1981 it was removed from static display, in exchange for a smaller Shay (ex- Cass Scenic No. 1) and an H. K. Porter 0-4-0T (Saint Elizabeth No. 4), Inc Porter locomotive, and placed in service on the Cass Scenic Railroad, as their No. 6. Nicknamed "Big 6", it has now served in tourist and enthusiast service for a longer period than it did for its original owners. It is the largest Shay currently in existence. Cass Scenic Railroad is also the home of the largest collection of operational geared steam locomotives in the world.

There is a 28 Ton, narrow gauge Class B Shay locomotive No. 31, restored at the Alishan Forest Railway in Taiwan. It was the second of the Alishan Shays to be restored and is to be used with restored Shay No. 26. Most of the Alishan's Shays survive on display in Taiwan, although one (No. 14), has been exported to Australia's Puffing Billy Railway.

The Cass Scenic Railroad is home to several more Shays other than the aforementioned No. 5 and No. 6. The CSRR own and operates Shay No. 11, built in 1923, went originally to Hutchinson Lumber Company, Feather Falls, CA; this Shay is best known as the Feather River No. 3. Also a class C shay, No. 11, weighs 103-tons. The CSRR also owns Shay No. 2, a Pacific Coast Shay constructed in July 1928 for the Mayo Lumber Company of Paldi, Vancouver Island, British Columbia. No. 2 is also the only Shay locomotive to have burned wood, coal, and oil in her lifetime; she is a C class Shay, and weighs 93 tons. The Cass Scenic has one other shay that runs, Shay No. 4; originally numbered 5, she was made for the Birch Valley Lumber Company, Tioga, West Virginia in 1922. Like the CSRR's non-operational Shay No. 7, No. 4 is a C-70 80-ton shay.

The Rail Historical Society of Northern New York (RHSNNY) is home to the Class B Shay No. 8 "Livingston Lansing" which was willed to the museum by Mr. Lansing. It is on display at the RHSNNY museum in Croghan, N.Y. It is not operational. 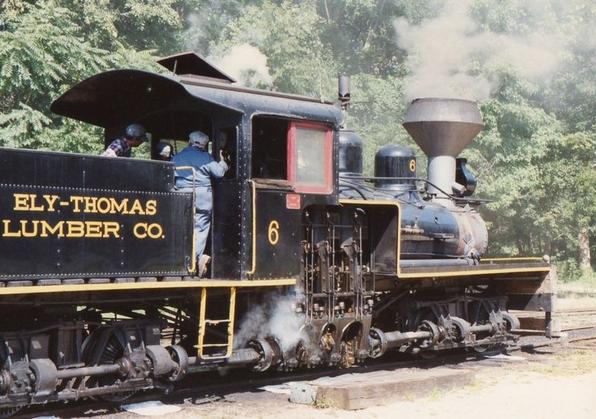