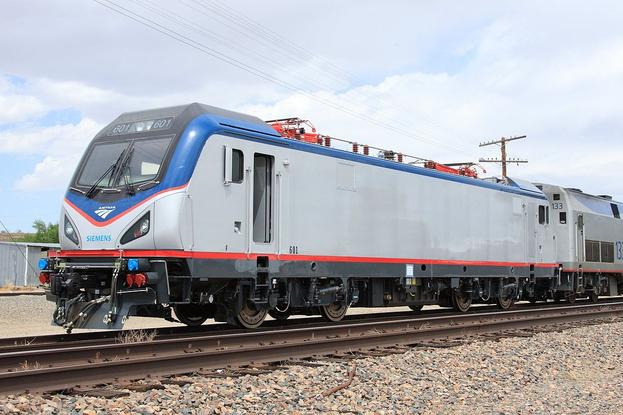 Siemens ACS-64 Electric Locomotive
The Siemens ACS-64, or Amtrak Cities Sprinter, is an electric locomotive designed by Siemens Mobility for use in the northeastern United States. The first 70 locomotives built are to operate on the Northeast Corridor (NEC) and the Keystone Corridor, replacing the railroads' existing fleet of AEM-7 and HHP-8 locomotives. The first Amtrak ACS-64 entered service in February 2014; deliveries will last until 2015. SEPTA Regional Rail will receive 13 locomotives (with an option to purchase 5 additional units) for commuter service in 2018.

Design
The design is based on the EuroSprinter and the Vectron platforms, which Siemens sells in Europe and Asia. Significant structural changes to the design were made to comply with American crashworthiness requirements, including the addition of crumple zones and anti-climbing features as well as structural strengthening of the cab, resulting in a heavier locomotive than the previous models. The body is a monocoque structure with integral frames and sidewalls.

The locomotives are able to operate from the 25 kV 60 Hz, 12.5 kV 60 Hz, and 12 kV 25 Hz power supplies used on the Northeast Corridor, and have a maximum power of 6,400 kilowatts (8,600 hp). The locomotives are designed to be capable of accelerating 18 Amfleet cars to maximum speeds as high as 125 mph (201 km/h) on the Northeast Corridor in a little over eight minutes, with trains of eight Amfleets taking two and a half minutes to reach the same speed. They have advanced safety systems, including specialized couplers designed to keep trains from rolling over, jackknifing, or derailing during a collision. Additionally, the new locomotives are more energy-efficient than those that they replace, and lack dynamic braking grids in favor of 100% regenerative braking, depending on grid receptiveness. Energy generated from the brake may also be utilized to meet HEP needs, further reducing current draw from the grid.

Each locomotive has two electrical converter units with three IGBT based, water cooled output inverters per converter. Two of the inverters power the traction motors; the third unit supplies head-end and auxiliary power. The HEP/auxiliary inverters are dual-redundant and identical (rated 1,000 kW or 1,300 hp), allowing the locomotive to remain in service should one inverter fail en route. The locomotive bogies are fabricated steel designs, with low-lying traction links and center pivot pin. The traction motors are frame-mounted, with torque transmitted via a hollow shaft drive. Locomotive braking is facilitated by cheek mounted disc brakes on each wheel.

Amtrak order
Procurement
In October 2010, Amtrak ordered 70 locomotives at a cost of $466 million, to be delivered beginning in February 2013. The order was the second part of Amtrak's company-wide fleet-replacement program, after an order for 130 Viewliner II passenger cars was placed in July 2010. On June 30, 2011, US Secretary of Transportation Ray LaHood announced that Amtrak had received a $562.9 million loan from the federal government's Railroad Rehabilitation and Improvement Financing program for the new locomotives. The additional funding over and above the $466 million will cover capital spare parts and facility improvements to accommodate the ACS-64s.

Amtrak and Siemens Mobility unveiled the first three completed locomotives on May 13, 2013. They were tested during the summer of 2013: Nos. 600 and 601 at the Transportation Technology Center in Pueblo, Colorado, and No. 602 on the NEC.

On February 6, 2014, Vice President Joseph R. Biden visited 30th Street Station in Philadelphia to tour ACS-64 #600. In his subsequent remarks he stressed the importance of infrastructure investment as well as the important role Amtrak's new locomotives will play in serving the critical artery of the Northeast Corridor.

Service
Unit 600 entered service on February 7, 2014, on Northeast Regional train 171 from Boston to Washington, D.C. Deliveries will proceed at a rate of three per month until the final locomotives are delivered in 2015. As the new locomotives enter service, they will gradually displace the electric locomotives that Amtrak currently uses. The extra six ACS-64 units will be used to increase the number of locomotives available for use at any point, and to add more frequent service in the future.

On May 12, 2015, No. 601 (shown above) was pulling Northeast Regional No. 188 when it derailed at Frankford Junction in the Port Richmond section of Philadelphia due to excessive speed on a restricted curve. It is currently unknown if this unit will return to service or be written off and scrapped.

On April 3, 2016, No. 627 pulling the Palmetto hit a backhoe on the track and derailed in Chester, PA, sadly killing 2 trackside workers. The locomotive was severely damaged on the front.

In November 2014, Amtrak named ACS-64 No. 600 the David L Gunn in honor of the longtime transportation official who has served at many agencies.

SEPTA order
In May 2015, SEPTA (Southeastern Pennsylvania Transportation Authority) approved an order for 13 ACS-64 locomotives for commuter service to replace its 7 AEM-7 and single ALP-44 locomotives on push-pull express trains, with an option for an additional five locomotives to be added to the order. The total contract value, including the option locomotives, is worth $154,394,083. They are scheduled for delivery in 2018. On November 11, 2015, Siemens announced that it been awarded the $118 million contract for the initial 13 locomotives.

On February 29, 2016, unit 664, which is an Amtrak unit, started going on test runs on SEPTA Regional Rail Branches to test the height of the locomotives on SEPTA territory, and to make sure it has clearance through the Center City tunnels, which run outside of 30th Street Station to slightly beyond Jefferson Station. After testing the unit on most of SEPTA's lines, it was returned to Amtrak on March 21 2016 for completion of its acceptance testing.