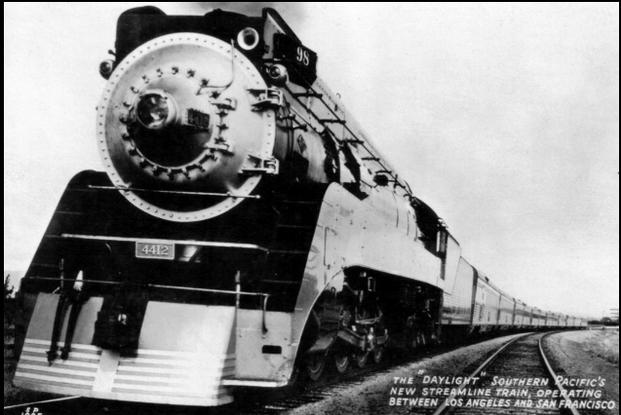 Southern Pacific Class GS-2 Streamlined Steam Locomotive
The GS-2 was a streamlined 4-8-4 Northern type steam locomotive that served the Southern Pacific Company from 1937 to 1956. They were built by Lima Locomotive Works and were numbered 4410 through 4415. GS stands for "Golden State" or "General Service."

The GS-2 had a very different appearance than that of the GS-1. The GS-2s were streamlined and designed for high-speed passenger service. They featured a silver smokebox with a cone-shaped single headlight casing, skyline casing on the top of the boiler, skirting on the sides, and an air horn. They retained the teardrop classification lights and whistles.

They were the first to receive the red and orange "Daylight" paint scheme and were used for the streamlined debut of Southern Pacific's premier passenger train, the Coast Daylight in 1937. The following year they were replaced by the improved GS-3 engines. During World War II, they were painted black and silver and were used to transport troops. In the 1950s their side skirting was removed for easier maintenance, and the locomotives were assigned to general service, pulling such trains as San Jose-San Francisco commutes, the "Coast Mail" trains, and freight service.

GS-2 No. 4412 pulling the "Daylight" between San Francisco and Los Angeles. 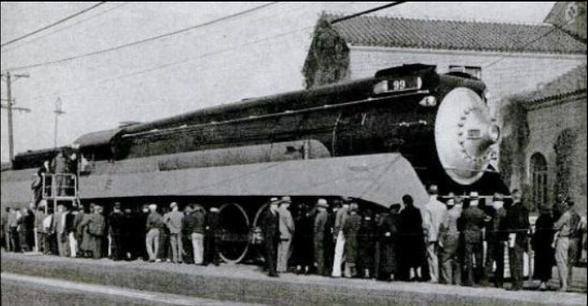 The debut of Southern Pacific's Daylight in 1937.