Southern Pacific Class GS-3 Semi-Streamlined Steam Locomotive
The GS-3 was a streamlined 4-8-4 Northern type steam locomotive that served the Southern Pacific Company from 1938 to 1957-1968. They were built by Lima Locomotive Works and were numbered 4416 through 4429. GS stands for "Golden State" or "General Service."

The GS-3 had an appearance similar to the GS-2. The GS-3s were streamlined and designed for high-speed passenger service. Like the GS-2, they featured a silver smokebox with a cone-shaped single headlight casing, skyline casing on the top of the boiler, skirting on the sides, an air horn to supplement the whistle and teardrop classification lights. The only major difference in appearance was the increase in driver size.

They received the orange and red "Daylight" paint scheme. They were primarily used on Southern Pacific's premier passenger train at the time, the Coast Daylight. In later years after being replaced by newer GS class engines, they were painted black, had their side skirting removed for easier maintenance, and were reassigned to the San Jose-San Francisco commuter trains, freight service, and made occasional appearances on the San Joaquin Daylight. 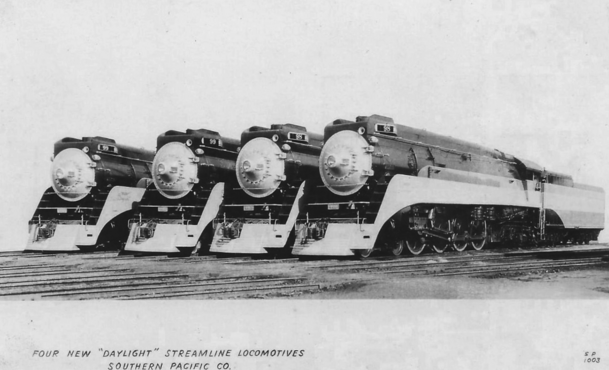