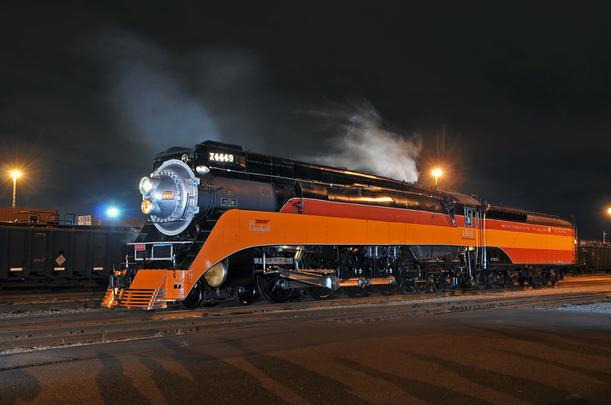 Southern Pacific Class GS-4 Semi-Streamlined Steam Locomotive
The GS-4 was a streamlined 4-8-4 Northern type steam locomotive used on the Southern Pacific Company from 1941 to 1958. They were built by the Lima Locomotive Works and were numbered 4430 through 4457. GS stands for "Golden State" or "General Service."

Unlike the GS-3, the GS-4 had a dual-headlight casing (top headlight was a mars light) on the silver smokebox. Another change was the all-weather cab. It retained the skyline casing atop of the boiler, skirting on the sides, an air horn to supplement the whistle and teardrop classification lights. They carried the orange and red "Daylight" paint scheme.

The GS-4s were passenger engines capable of 110 mph, though timetable speed limit never exceeded 75 mph. Southern Pacific's premier passenger trains were pulled by GS-4s, the Coast Daylight, San Joaquin Daylight, Lark, Cascade, Golden State and Sunset Limited. During wartime and in the first years after the war some of the GS-4 locomotives were painted black; by 1948 all had been repainted into Daylight colors. Starting in March 1950 most were painted black again and had their side skirts removed for easier maintenance, and were reassigned to the San Jose-San Francisco commuter trains, freight service and the occasional San Joaquin Daylight (steam locomotives remained on that train as late as 1956 which made the San Joaquin Daylight the last streamliner train to be pulled by steam on the Southern Pacific) until new diesels arrived and they were retired. The last GS-4 engines were de-skirted and painted black in 1956; a GS-4 pulled its last passenger train in January 1957. All were retired by 1958. GS-4 number 4443 pulled one of the final steam excursions on the Southern Pacific in 1957.

Preservation
Southern Pacific 4449 is the only surviving GS-4 locomotive and is one of the most recognizable locomotives of all time. 4449 was donated to the City of Portland (in Oregon), in 1958 and moved to Oaks Amusement Park for static display. In December 1974 the locomotive was removed from Oaks Park to undergo restoration. From August 1975 to December 1976, 4449 shared duties with several other steam locomotives pulling the American Freedom Train throughout the U.S. The 4449 is still operational, and since mid-2012 it resides at the Oregon Rail Heritage Center in Portland along with other preserved locomotives and rolling stock.

The tender of SP 4444 (the last GS-4 to be scrapped) was rebuilt by SP and used as a "hammer car" to test impacts on Hydracushion boxcars; it was scrapped in the early 1970s.

Click image to Shop for your own SP Daylight on eBay.