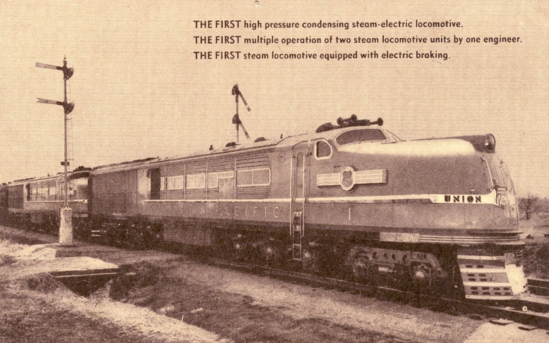 A circa-1939 postcard touting the GE steam turbine locomotives' "firsts", including first multiple operation of two steam locomotives by a single engineer.

Disadvantages
High efficiency is ordinarily obtained only at high speed. Gas turbine locomotives had similar problems, together with a range of other difficulties.
Peak efficiency can be reached only if the turbine exhausts into a near vacuum, generated by a surface condenser. These devices are heavy and cumbersome.
Turbines can rotate in only one direction. A reverse turbine must also be fitted for a direct-drive steam turbine locomotive to be able to move backwards.

Drive methods
There are two ways to drive the wheels: either directly via gears, or using generator-driven traction motors.

In the waning years of steam, the Baldwin Locomotive Works undertook several attempts at alternative technologies to diesel power. In 1944, Baldwin built the sole example of the S2 class, c/n 70900, for the Pennsylvania Railroad, delivering it in September 1944. It was the largest direct-drive steam turbine locomotive in the world and had a 6-8-6 wheel arrangement. It was originally designed as a 4-8-4, but due to shortages of lightweight materials during World War II, the S2 required additional leading and trailing wheels. Numbered 6200 on the PRR roster, the S2 had a maximum power output of 6,900 HP  and was capable of speeds over 100 mph. With the tender, the unit was approximately 123 feet long. The steam turbine was a modified marine unit. While the gearing system was simpler than a generator, it had a fatal flaw: the turbine was inefficient at slow speeds. Below about 40 mph (64 km/h) the turbine used enormous amounts of steam and fuel. At high speeds, however, the S2 could propel heavy trains almost effortlessly and efficiently. The smooth turbine drive put far less stress on the track than a normal piston-driven locomotive. However, poor efficiency at slow speeds doomed this turbine, and with diesel-electrics being introduced, no more S2s were built. The locomotive was retired in 1949 and scrapped in May, 1952.

Electric transmission
General Electric
General Electric built two steam turbine-electric locomotives with a 2+C-C+2 (4-6-6-4) wheel arrangement for the Union Pacific Railroad in 1938. These locomotives essentially operated as mobile steam power plants and were correspondingly complex. They were the only condensing steam locomotives ever used in the United States. A Babcock & Wilcox boiler provided steam, which drove a steam turbine which powered a generator, providing power to the electric traction motors that drove the wheels, as well as providing head end power for the rest of the train. Boiler control was largely automatic, and the two locomotives could be connected together into a multiple unit, both controlled from a single cab. The boiler was oil-fired, and the fuel was "Bunker C" heavy fuel oil, the same fuel used in large vessels, and also the fuel which was later used in Union Pacific's gas turbine-electric locomotives. Union Pacific accepted the locomotives in 1939, but returned them later that year, citing unsatisfactory results. The GE turbines were used during a motive power shortage on the Great Northern Railway in 1943, and appear to have performed quite well. However, by the end of 1943, the wheels of both locomotives were worn to the point of needing replacement, and one of the locomotive's boilers developed a defect. The locomotives were returned to GE and dismantled.

C&O Railway
In 1947–1948 Baldwin built three unique coal-fired steam turbine-electric locomotives for passenger trains on the Chesapeake and Ohio Railway (C&O). Their designation was M1, but because of their expense and poor performance they acquired the nickname "Sacred Cow". The 6,000 horsepower units, which had Westinghouse electrical systems, had a 2-C1+2-C1-B wheel arrangement. They were 106 feet long. The cab was in the center with a coal bunker ahead of it and a backwards-mounted conventional boiler behind it (the tender only carried water). These locomotives were intended for a route from Washington, D.C. to Cincinnati, Ohio but could never travel the whole route without some sort of failure. Coal dust and water frequently got into the traction motors. While these problems could have been fixed given time, it was obvious that these locomotives would always be expensive to maintain and all three were scrapped in 1950.

Norfolk & Western Railway
In May 1954 Baldwin built a 4,500 horsepower steam turbine-electric locomotive for freight service on the Norfolk and Western Railway (N&W), nicknamed the Jawn Henry after the legend of John Henry, a rock driller who famously raced against a steam drill and won, only to die immediately after. Length including tender was 161 ft 1-1/2 inches, probably the record for a steam locomotive; engine-only length was 111 ft 7-1/2 inches, perhaps the record for any single unit.

The unit looked similar to the C&O turbines but differed mechanically; it was a C+C-C+C with a Babcock & Wilcox water-tube boiler with automatic controls. The boiler controls were sometimes problematic, and (as with the C&O turbines) coal dust and water got into the motors. The Jawn Henry was retired from the N&W roster on January 4, 1958.