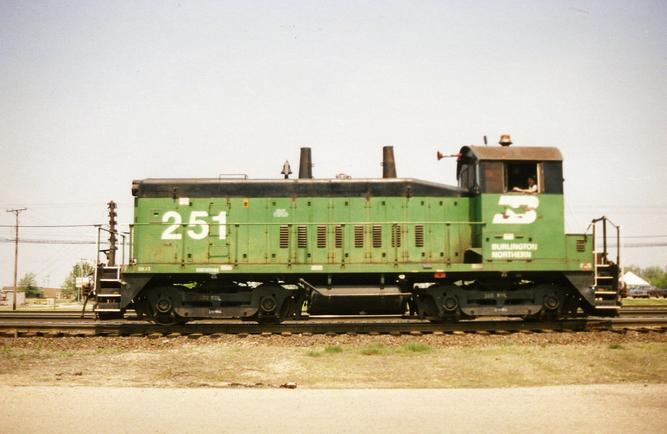 EMD SW1200 Diesel-Electric Locomotive
An EMD SW1200 is a diesel switcher locomotive built by General Motors Electro-Motive Division between January 1954 and May 1966. Power was provided by an EMD 567C 12-cylinder engine which generated 1,200 hp (895 kW). Late SW1200s built in 1966 were built with the 567E 12-cylinder engine. Additional SW1200 production was completed by General Motors Diesel in Ontario Canada between September 1955 and June 1964.

A cow-calf variation, the TR12, was cataloged, but none were built.

A few units were built with dynamic brakes, featuring large square box with a fan on top of the hood, right in front of the cab.

An SW1200RS is a variation of the standard SW1200 that featured large front and rear (on some units) numberboard housings, EMD Flexicoil B-B trucks, and larger fuel tanks for road switcher service. The majority of the Canadian National and Canadian Pacific SW1200 fleets were purchased as SW1200RS units. The Sandersville Railroad Company EMD SW1200 road number SAN 1200 formerly SAN 200 was originally built with the V-12 EMD 567C Prime Mover but it was replaced with a V-12 EMD 645 Prime Mover, the two both produce 1,200 Horsepower, even though the same motor in the EMD SW1500 produces 1,500 Horsepower. The SAN 1200 also has EMD Flexcoil trucks instead of the standard switcher trucks found on other EMD SW1200s.

Surviving and preserved units
Grand Trunk Western 1512 is now owned by the West Michigan Railroad and is currently in use as a short line freight hauler.

Fremont and Elkhorn Valley Railroad 1219 built in March 1962 for Chicago & North Western is utilized for their excursion trains as well as the Fremont Dinner Train and currently pulls 1920s era passenger cars for their non-profit excursion operations & the for-profit dinner train cars.

Coos Bay Lumber Company 1203 is now being operated by Coos Bay Rail Link as a road switcher and can be seen anywhere from Eugene, OR, to Coos Bay, OR, wearing road number 1203.

Crab Orchard and Egyptian 1136 and 1161 are both still in operation as short line freight haulers on the CO&E lines based in Herrin, Illinois and Marion, Illinois respectively.

Resolute Forest Products used 1305 at its now closed mill in Iroquois Falls, Ontario, Canada. It was rebuilt by Diesel Electric Services in Sudbury, Ontario, Canada, in August and September 2012.Quincy Railroad (California), owned by Sierra Pacific Industries at their mill in Quincy, California, has QRR SW1200 No. 5, builder No. 28344, built June 1963. Lineage is; ex-Amador Central No. 11, former Ashley Drew and Northern No. 1208, formerly ADN No. 178.

Former B&O 9614 was acquired many years ago by the Potomac Electric Power Company for use at its power generating station in Alexandria, Virginia, which later became the property of Mirant, then GenOn Energy. Over the years the surrounding area changed from industrial use to residential and, after much community action, the plant closed on October 1, 2012. As of August 2013 the locomotive was still on site at the dormant plant but has since been transferred to the power generating station near Morgantown, MD.

Former Texas and New Orleans 113 is now working for Key Cooperative in Newton, Iowa at its grain facility.

Englewood Railway on Vancouver Island, British Columbia, operates four SW1200, three of which have been rebuilt with 1,500 hp (1,100 kW) Caterpillar engines, the fourth retaining its original power plant. The locomotives also have larger fuel tanks, dynamic brakes, and operate as "road" locomotives hauling lumber. Three of these locomotives were originally owned by Canadian Forest Products (units 301 to 303), and one from COOS (Englewood Unit 304).

Commonwealth Edison unit 16 and Terminal Railroad Association of St. Louis unit 1231 are now being operated by Steel Dynamics Inc. Pittsboro, IN. Both locomotives are used as scrap yard switchers at the Pittsboro facility.

Northern Pacific Railway 146, after being inherited by successor railroads Burlington Northern Railroad and BNSF Railway, was sold to Evraz North America and renumbered 3540. In November 2015, it was acquired by the Virginia and Truckee Railroad in Virginia City, Nevada, and renumbered D-4 to fit the railroad's diesel numbering series. It is in operable condition.

GMD SW1200MG Electric Locomotive
The EMD SW1200MG was a 4-axle electric locomotive built by General Motors Diesel between 1963 and 1971. This locomotive was the electric version of the diesel powered SW1200, with the prime mover replaced by a motor-generator set, hence the MG suffix in the model number.

Locomotives run under 2400V 60 Hz, in automatic control without driver.[clarification needed] The difference with SW1200 is that a single-phase electric motor is provided in place of the diesel motor, with adapted control.

Nine examples of this locomotive were built for a single Canadian customer – Iron Ore Company of Canada (IOC).