The Timken 1111 was re-lettered and re-numbered as Northern Pacific 2626 later in its career. 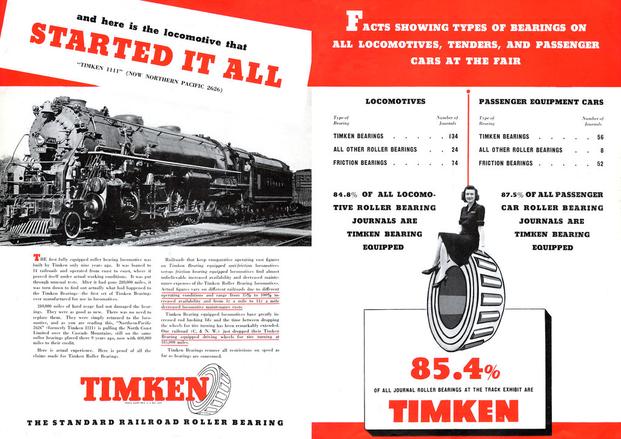 Timken 1111 4-8-4 Steam Locomotive
Timken 1111, also called the Timken Four Aces, was a 4-8-4 steam locomotive built in 1930 by American Locomotive Company (Alco) to serve as a demonstration unit for new roller bearings produced by the Timken Roller Bearing Company. It was the first locomotive built with all sealed roller bearings rather than the friction bearings or a mix of the two types.

Design and construction
Timken chose a 4-8-4 on which to demonstrate the company's bearings so the locomotive could be used in all types of railroad work, especially on heavy freight and fast passenger trains. A total of 52 different parts manufacturers agreed to supply their parts for the locomotive "on account" until the locomotive operated over 100,000 miles (161,000 km). The suppliers' names were placed on a plaque that was fastened to the tender for the duration of the demonstration period.

In-service demonstration
The locomotive's first demonstration runs were hauling freight on the New York Central Railroad. After those demonstrations, it was used on thirteen other major railroads, including the Chesapeake and Ohio Railroad, New Haven Railroad and Pennsylvania Railroad (PRR), in both freight and passenger service. The PRR used the locomotive on a passenger train where it hauled twelve passenger cars through the Allegheny Mountains so well that the train did not require the use of helpers and arrived at its destination three minutes early.

Regular use and disposition
The Northern Pacific purchased the 1111 from Timken on February 8, 1933, after it crossed the 100,000-mile (160,000 km) mark. The railroad renumbered it to 2626, classifying it internally as locomotive class A-1 (this locomotive was the class's sole member), and used it in passenger service between Seattle and Yakima, Washington, and later shifted its service to passenger trains between Seattle and Missoula, Montana. Northern Pacific used the locomotive for 23 years before retiring it from active service. The locomotive's last run was made on August 4, 1957 when it pulled a passenger train from Seattle to Cle Elum and return.

Efforts were made at preservation for the locomotive, and the Timken Company even seriously attempted to purchase the locomotive and move it back to the company's Canton, Ohio, headquarters under its own power. But the locomotive was scrapped before Timken and Northern Pacific could complete their negotiations.