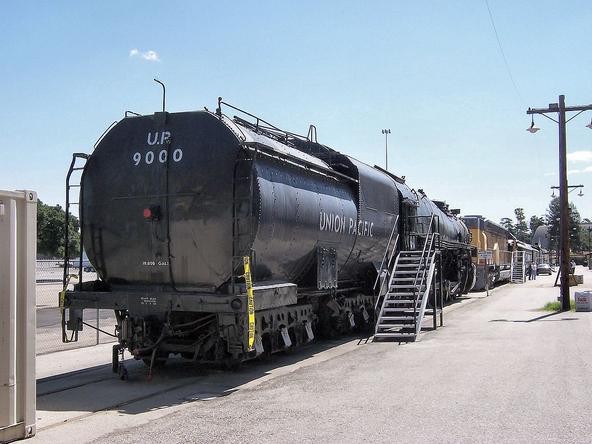 The prototype, UP 9000, as preserved at the Los Angeles County Fairplex in Pomona, California.

Union Pacific 9000 Series 4-12-2 Steam Locomotive
Only one type of 4-12-2 was built: the Union Pacific Railroad's 9000-series locomotives, 88 of which were built by ALCO between 1926 and 1930. These locomotives were used to increase the speed of freight trains in flat country, and were fairly successful, but were maintenance nightmares, largely because of their use of an inside third cylinder driving the cranked second driving axle between the frames. There was no inside valve gear to worry about, however. ALCO had obtained permission to use the conjugated valve gear invented by Sir Nigel Gresley. This system used two hinged levers connected to the outer cylinder's valves to operate the inner cylinder's valve. The 9000 class locomotives were the largest ever to use Gresley gear.

Between 1934 and 1940 eight of the first fifteen locos had their Gresley gear removed and were converted to a "double Walschaerts" valve gear which utilized a double eccentric (return) crank and second link on the right side (similar to the gear Baldwin used on its 3-cylinder experimental compound 4-10-2 No. 60000), which operated the valve for the inside cylinder. Union Pacific referred to this system as the "third link." The 4-12-2's constructed from 1928 utilized roller bearings in the Gresley lever bearings, thus none of these engines were converted. The pre-1928 engines not converted received the roller bearing levers in 1940, and no further conversions were made.

During design the third and fourth driving axles were planned to be "blind" (flangeless) in order to improve curve handling, but ALCO's lateral motion devices on the first and sixth axles (which allowed the axles to slide up to two inches to the side) made this unnecessary. They had the longest rigid wheelbase in North America, and the longest in the world until the Soviet Union built their 4-14-4 locomotive in 1934. The trailing truck carried the same axle load as the drivers, which was unusual.

There has been debate as to whether the first driving axle of the 4-12-2 was cranked to provide clearance for the main rod connected to the second axle. Union Pacific drawings show no such crank on the first axle, and an article in Railway Age proclaims "The 67-inch drivers permit the use of a straight axle on the front drivers..." The spacing between the first and second axles was increased by 18 in (46 cm) to provide clearance. Based on the published dimensions, at its closest the centerline of the inside rod was 11.645 inches from the centerline of the first axle. (UP drawings reproduced in Kratville and Bush's "Union Pacific Type" books show the inside rod 113 inches long and the first and second driver axles 88 inches apart. The inside cylinder axis was inclined 9.5 degrees and was 32 inches above the plane of the driving axles at a point 181 inches ahead of the second driving axle, so the cylinder axis missed the centerline of the second axle by 1-11/16 inches. The rod centerline is closest to the axle when the crank is 54.49 degrees below horizontal.)

One example survives: Union Pacific 9000 at the Railway and Locomotive Historical Society's museum at the Los Angeles County Fairplex in Pomona, California.

4-12-2
The 4-12-2 wheel arrangement was named the Union Pacific type, after the only railroad to use it.
Under the Whyte notation for the classification of steam locomotives, 4-12-2 represents the wheel arrangement of four leading wheels, twelve coupled driving wheels, and two trailing wheels. 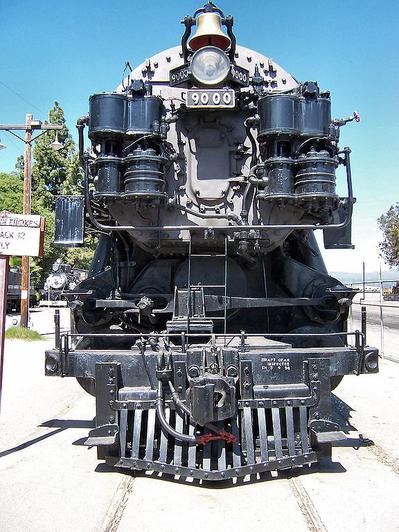 Front view of the same locomotive. The third cylinder and the mechanism that controlled it can be seen below the smokebox. 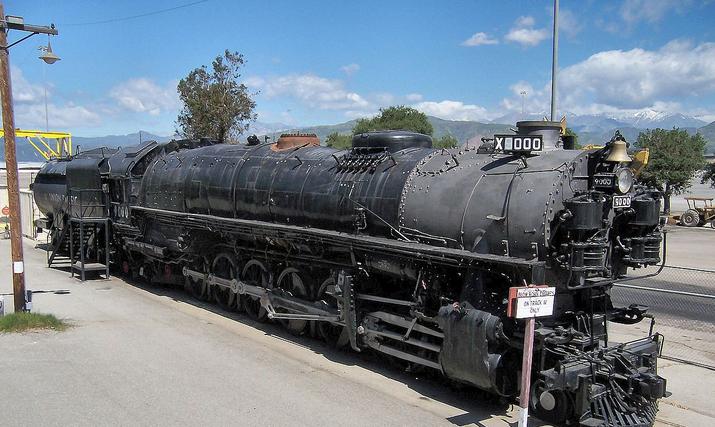 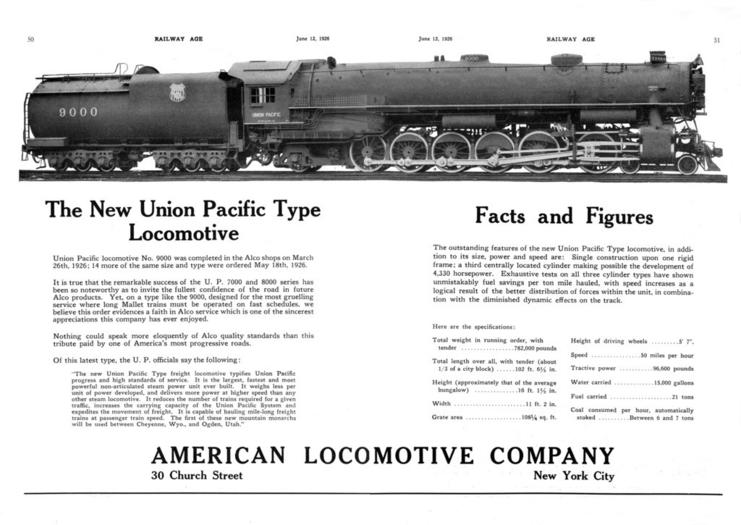