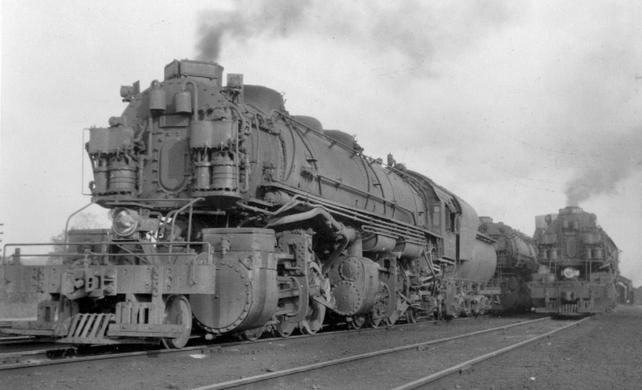 USRA 2-6-6-2 Steam Locomotive
The USRA 2-6-6-2 was a standardized design of 2-6-6-2 Mallet locomotives developed by the United States Railroad Administration during World War I.

Orders
During the tenure of the USRA, 30 of these articulated steam locomotives were built. The Chesapeake and Ohio Railway (C&O) and Wheeling and Lake Erie Railway (W&LE) ordered the USRA 2-6-6-2 Mallet. The first Mallet was delivered to the W&LE in 1919 for $71,966.94. Later, the Nickel Plate Road (NKP) leased them from the W&LE, renumbering them for use on its rails. The independently pivoted front engine allowed it to negotiate branch lines and tight curves while hauling larger consists than its smaller cousins in the USRA series.

The Chesapeake & Ohio Railroad ordered the first of these compact 2-6-6-2 articulated steam locomotives from Alco in 1911. It was a massive locomotive for the time, and it performed well enough for the C&O to order additional, but slightly modified, versions right through 1923. These locomotives were designed to replace the 2-8-0 Consolidations for the coal drags on the C&O’s Hinton Division. The 2-6-6-2s could handle more tonnage than the double-headed pair of 2-8-0s they replaced, and they burned less coal in the process. The 2-6-6-2s proved to be ideal mine run engines as their power and flexibility plus low weight on drivers made them ideal for the curving and heavily graded branches in the mountains of Virginia and West Virginia.

An additional ten (10) locomotives were built in 1949. These C&O Class H6 2-6-6-2s, numbered 1300 to 1309, were the last steam locomotives produced by Baldwin for use in the United States. The last of these were retired in 1957. Most of the locomotives were scrapped, but, the last two produced were retained by C&O as examples of their steam heritage. The C&O 1308 is in the care of the Collis P. Huntingdon Chapter of the National Railway Historical Society at Huntington, West Virginia, while the 1309 is being restored to operation at the Western Maryland Scenic Railroad in Cumberland, Maryland.