A Union Pacific Vauclain locomotive pulls Train No. 10 past Echo Station, Utah, circa 1913.

Steam flow in the valve and cylinders near the beginning of the stroke; note how the low-pressure steam flows through the center of the valve. 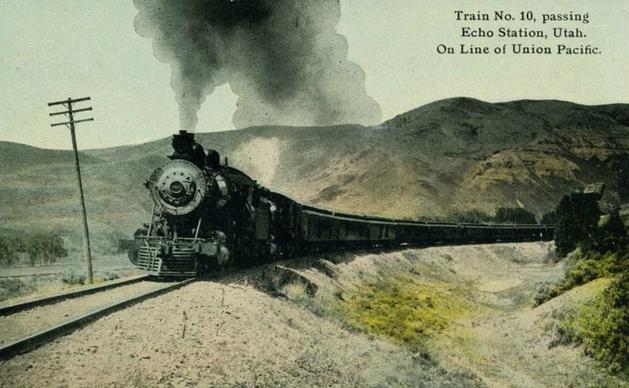 Vauclain Compound Steam Locomotive
The Vauclain compound was a type of compound steam locomotive that was briefly popular around 1900. Developed at the Baldwin Locomotive Works, it featured two pistons moving in parallel, driving a common crosshead and controlled by a common valve gear using a single, complex piston valve.

Advantages and disadvantages
The claimed advantage for this arrangement, as with other compounding arrangements, was greater economy due to lower fuel and water consumption. In practice uneven forces at the crosshead produced excess wear, with increased maintenance costs thus offsetting any fuel economies. The integration of the compounding system into the smokebox saddle made conversion to conventional engines straightforward, so most Vauclain compounds were so converted and led normal lives thereafter. The only known operable example is Manitou and Pikes Peak Railway No. 4, which is preserved on-site along with the static display of its sister No. 5.

Each side of the locomotive had its own separate engine, as with conventional locomotives. This eliminated the connections between sides characteristic of cross-compound engines, where the low- and high-pressure cylinders were on opposite sides. The direct flow of steam between the high- and low-pressure cylinders on each side of the locomotive eliminated the need for a receiving chamber to store the steam. It also avoided subjecting the locomotive frame to unequal forces from separate high- and low-pressure sides. The whole package was compact and took up little more space than conventional equipment. Indeed, at first glance from the side the Vauclain compound can be mistaken for a conventional simple locomotive; the only giveaways are the unusual arrangement of the crosshead and (viewed from the front) the extra cylinder.

The scheme did not produce a more powerful locomotive; the maximum practical tractive force was governed by the weight on the drivers, and this did not change. The advantage was efficiency: the compounding reduced the steam required for the same performance. According to Baldwin's standard sizing tables, the high-pressure cylinder on the compound was about 70% the diameter of the single cylinder of the conventional engine; therefore, steam consumption for the same stroke and degree of cutoff was about half that of the conventional engine.[9] In practice lesser results were generally achieved, with Baldwin in 1900 reporting trials by various railroads showing fuel savings of 17% to 45%. In order to produce symmetrical forces, the low-pressure cylinders had to be about 66% larger in diameter than the high, or about 20% larger than conventional cylinders; for small drivers this could lead to the clearance issues mentioned earlier, thus requiring the low-pressure cylinders to be on top.

History
The Vauclain compound was introduced in 1889 through U.S. Patent 406,011 by its namesake and the then general superintendent of Baldwin and eventually president of the company, Samuel M. Vauclain. Soon most Baldwin customers were operating some examples; a brochure from 1900 lists sales to 140 customers, including large fleets to such Class I railroads as the Baltimore and Ohio Railroad, the Chicago, Milwaukee and St. Paul Railway, the Erie Railroad, the Lehigh Valley Railroad, the Norfolk and Western Railway, and the Philadelphia and Reading Railroad. Many other lines purchased one or two as samples. Vauclain was awarded the Elliott Cresson Medal of the Franklin Institute in 1891 for the locomotive design; in recommending award, the reviewing committee wrote: "Your committee, in conclusion, find that in view of the state of art, the Vauclain compound locomotive is a distinctly new and original type of locomotive. It is the most marked departure from the usual construction of engines, that has elicited general satisfaction wherever introduced, and in view of the reliable and satisfactory performance in service under the largest variations of conditions, immunity from total disablement, ready adaptability within limits of space incapable of accommodating other compound engines, and general applicability to and utility in railway service, it is, in the opinion of your committee, deserving of recognition by the award of the Elliott Cresson Medal of the Franklin Institute, which they hereby recommend."

This popularity, however, was short-lived. Significant maintenance difficulties appeared, particularly with uneven forces wear on the crosshead guides. The two cylinders were supposed to be proportioned so as to do equal work (with the low pressure being three times larger than the high); but since the steam passed between the low- and high-pressure cylinder is always expanded, even before cutoff, the force produced in the low-pressure cylinder varies differently from that in the high-pressure cylinder. The complex valve assembly and the starter valve also led to increased maintenance costs. The introduction of the superheater further increased efficiency and made it much easier to maintain.

All of the compounding machinery was contained in the valve chest, which in American locomotives (in the days before one piece cast frames) was integral with the smokebox saddle. The whole unit therefore could be unbolted and replaced with conventional single expansion cylinders. That was the typical fate of Vauclain compounds: when the time came for a major overhaul, the compound machinery and Stephenson valve gear were removed, and the engine was rebuilt with superheating, Walschaerts valve gear, and conventional cylinders.

Ironically, two of the four surviving Manitou and Pike's Peak Railway locomotives were converted to compounding after experience with M&PP No. 4, built in 1893 and at present the only operating Vauclain compound. (Vauclain himself had traveled to the line to deal with operational issues with the original engines in their pre-compounding state.) All six steam locomotives of the line were of this type. 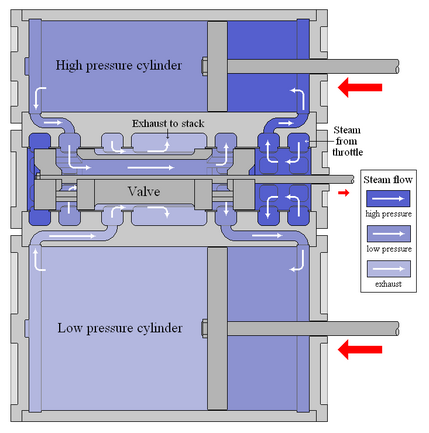