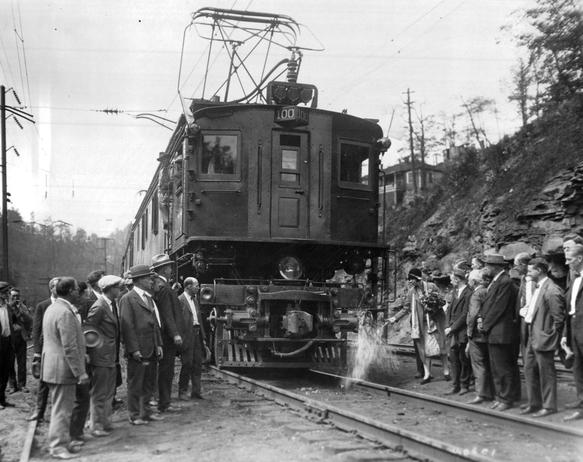 The Midget and Leviathan. A contemporary illustration of EL-3A No. 109 along with a small mine locomotive. Circa 1915-1930. 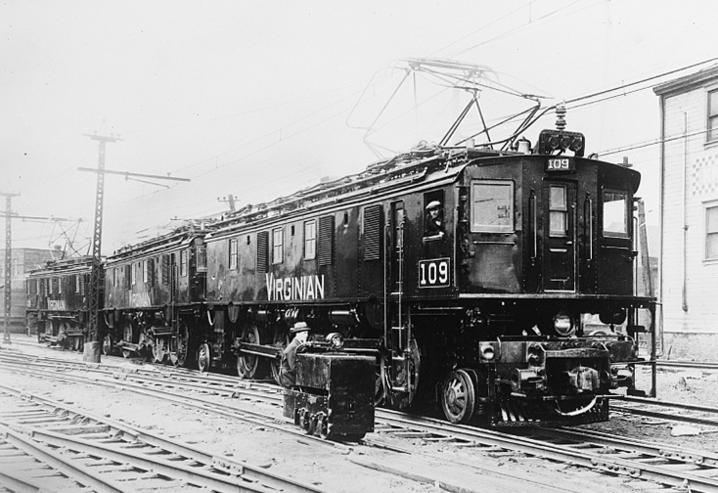 The EL-3A electric locomotives of the Virginian Railway were triple locomotives running on 11 kV 25 Hz alternating current for hauling coal trains on the Elmore-Roanoke electrified section, the main railway line. The locomotives were the largest and most powerful in the world when they were delivered.

The Virginian Railway had a very major grade at Clark's Gap, West Virginia, and tried large steam locomotives before turning to an alternative already in use by one of its neighboring competitors, Norfolk & Western Railway: a railway electrification system. With work authorized beginning in 1922, a 134-mile portion of the railroad in the mountains from Mullens, West Virginia over Clark's Gap and several other major grades to Roanoke, Virginia was equipped with overhead wires supported by a catenary system. The Virginian built its own power plant at Narrows, Virginia. The electrification was completed in 1925 at a cost of $15 million, equal to $209,316,888 today. A link was established with Norfolk & Western to share electricity from its nearby electrification during contingencies. ALCO - Westinghouse supplied the Virginian with EL-3A electric locomotives, which were equipped with pantographs. The 36 initial units were normally linked in groups of three as one set, and had a much greater load capacity than the steam power they replaced.

According to Westinghouse, when the contract for electrification of the 134 mile (215 km) section through the Allegheny Mountains was signed, it was the world's largest order for the electrification of a railway line. The $15 million contract included delivery of the entire electrical infrastructure as well as the provision of 36 traction unit section locomotives. Of these, 30 were assembled as 10 triple-engined locomotives and classified as EL-3A. 6 units were used as individual locomotives and classified as EL-1A series. The individual sections bore the numbers EL-1 to EL-36.

The first three-unit locomotive was presented on May 14, 1925 at the Westinghouse plant in Pittsburgh.  The electrical commissioning took place on September 14 of the same year on the western grade of the Allegheny Mountains from Elmore to Clarks Gap, and then on October 1, 1925 to Princeton, and then the following year on September 16, 1926 continuously to Roanoke.

Two EL-3A locomotives - one in the front and one in the back of the train - hauled 6,000 ton trains across the 21% grade from Elmore to Clark's Gap at 23 km per hour. On the 6% grade between Whitethorne and Merrimac, the locomotives had enough power to haul 9,000 ton trains. The electric operation doubled the capacity of the line, as the trains were able to climb the 21% grade twice as fast as steam locomotives, which only reached 11 km per hour on the same stretch of road when traveling up the mountain with a lighter, 5,500 ton train. During the descent, the electric regenerative brake of the locomotives not only reduced the wear of the tires and the consumption of brake pads, but it also saved 15,000 MWh of energy per year.

Due to an increase in traffic volume, the Virginian Railways added four EL-2B double locomotives in 1948.  In 1955, 12 EL-C class locomotives were added to the roster. The EL-3A locomotives were still in use until the cessation of electrical operation in 1959.

Technology
An EL-3A locomotive consisted of three sections connected by semi-permanent couplings that could be operated from a cab. The control circuits would have allowed the multiple control of four sections, but this was not used in practice. Each section was operational on its own. The electrical parts were supplied by Westinghouse, the rest of the locomotive by Alco. Each section had a locomotive box in Boxcab style, which, without transmitting tensile forces, lay on two trucks, in each of which two driving axles and a leading axle were arranged. The drive was effected by means of rods which with a arranged between the axle and the first set of drivers.

Photo of the Virginian Railway's Alco-Westinghouse EL3A being christened. September 25, 1925. 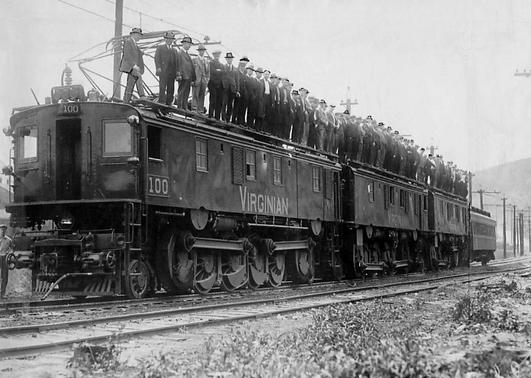 By reason of its great length, 152 feet, it is built in three sections to enable it to round curves. Each unit contains two motors, so that there are really six engines in one. One of the 36 original ALCO / Westinghouse overhead electric units for the Virginian Railway, intended for 3,000 ton coal trains.