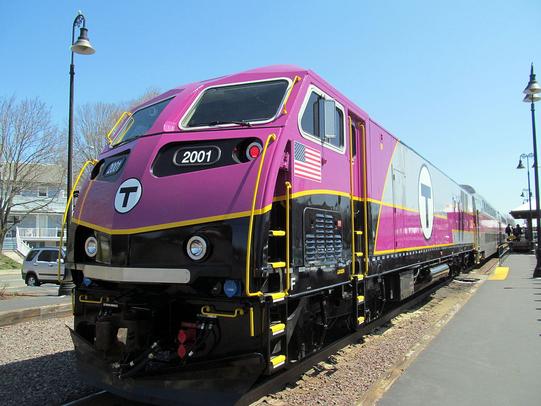 MBTA locomotive No. 2001, a brand new MPI HSP46, arrives at Reading on its first revenue round trip.

History
The company's origins go back as far as 1869 with the foundation of the Westinghouse Brake Company. That company (also known as WA&B later as WABCO) became independent in 1990 via a management buy-out, and went public in 1995. Another company, WABCO Vehicle Control Systems, also created from the Westinghouse Brake Company, is independent of Wabtec and was spun off by American Standard Companies (the ultimate owner) in 2007.

The other company forming Wabtec, MotivePower Industries, can be traced back to 1972, with the formation of a Rail Systems Group by the Morrison Knudsen group and the purchase of a manufacturing facility in Boise. In 1994 Morrison Knudsen created a subsidiary MK Rail Corporation; during the first half of the same decade the MK Rail group expanded with the acquisition of various other locomotive component companies. In 1996, MK Rail group is separated from the parent Morrison Knudsen and adopted the name MotivePower Industries Corporation. In the later half of the 1990s further companies were acquired – again all in the locomotive components business.

In March 2010, Wabtec announced that it had purchased Xorail, a railway signaling design and construction company.

In July 2010, Wabtec announced that it had purchased two manufacturers of rail equipment, Bach-Simpson Corp. and G&B Specialties. The companies produce locomotive components and track products respectively. The purchase price was reportedly $48 million.

In November 2010, Wabtec acquired all of the assets of Cleveland, Ohio, based manufacturer of traction motors and electric coils for rail and power generation markets Swiger Coil Systems.

In 2015, Wabtec acquired all three units of Metalocaucho (Spain,China,India) who are the leaders in the field of Suspension&Anti-Vibration systems.

On December 1, 2016 Wabtec acquired majority ownership of Faiveley Transport S.A. after completing the purchase of the Faiveley family stake for about $212 million in cash and 6.3 million shares of Wabtec common stock, which represented about 51% of the company’s shares outstanding.  Wabtec plans to launch a tender offer for the remaining public shares in December. Faiveley Transport is a leading global provider of value-added, integrated systems and services for the railway industry with annual sales of about $1.2 billion.

United Kingdom
Brush Traction
On February 28, 2011, Wabtec announced that it had acquired Brush Traction, an English locomotive builder and maintainer, for $31 million.

Wabtec Rail UK
Wabtec Rail Limited is a railway engineering company based in at the Doncaster Works in Doncaster, South Yorkshire, England. Services include the overhaul and repair of railway rolling stock and components. Wabtec Rail occupies part of the former British Rail Engineering site known locally as the Plant Works. The two main unions on site (Unite and RMT) gave notice on November 3, 2014, of their intention to ballot their members for industrial action over a pay dispute, for the first time in Wabtec Rail Limited's history.

Based at Barton under Needwood in Staffordshire, UK. LH has around 400 employees and annual sales of $65m, about 10% of which are in non-rail markets.