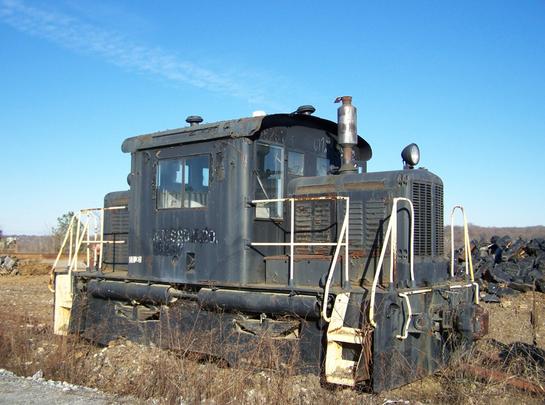 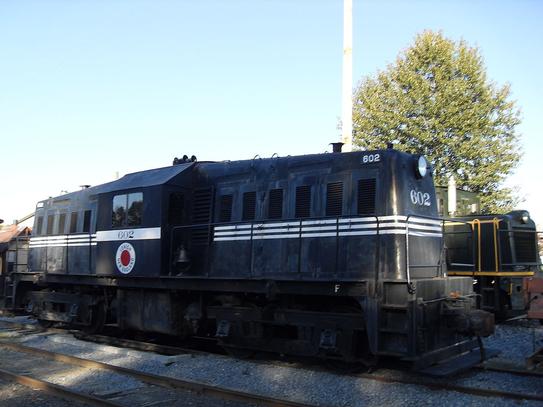 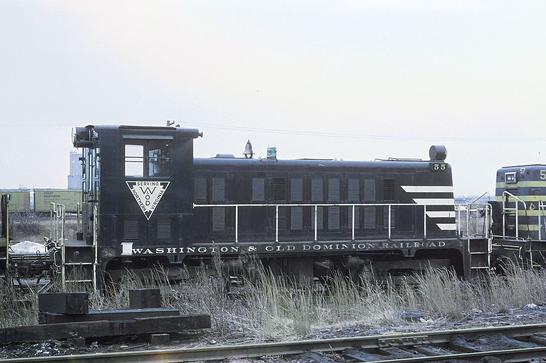 Geo D. Whitcomb Company
The Geo D. Whitcomb Company was founded by George Dexter Whitcomb (1834–1914), of Chicago, Illinois, who started a modest machine shop in 1878, and began the manufacture of coal mining machinery, laying the foundation for the concern that became known as The Whitcomb Locomotive Company.

Beginnings
Early in life, George Dexter Whitcomb, moved with his family, from Brandon, VT, to Kent, OH. Here he started his business career, engaging with the Pan-Handle Railroad, as purchasing agent. While in this employment, the air brake was invented, and he became very interested in its development. He co-operated in making the tests of the Westinghouse Air Brake and was one of the original stockholders and members of the Board of Directors of the Westinghouse Air Brake Company, when it was organized.

In 1868, George and his wife Leadora had a son, William Card Whitcomb. As an adult, William received an engineering degree from the newly founded, University of Southern California in 1889. Upon graduation he would join to assist and improve his father's business.

He continued in charge of these mines until about 1878. While there, the Harrison Mining Machine was brought to his attention. The concept of the power pick was that of a hand-held machine controlled by one person and operated by compressed air. He saw merit in the idea and took hold of the machine. He developed and perfected it into what is now known as the "Puncher Machine." This machine was the first successful undercutting machine put on the market in this country. He resigned his position with the coal company about 1878 to devote his entire time and attention to the mining machine business.

In 1896, his firm, then located at Orleans and Ohio Streets in Chicago, Illinois and was incorporated under the laws of Illinois as the George D. Whitcomb Company.

In 1886, he ultimately relocated to California, on account of his son, Carroll's, health. Here he purchased a tract of land and built a home and founded a suburb of Los Angeles, Glendora, California. He settled his family and spent most of the rest of his life at this place, he and wife Leadora and one of their daughter's moved to Los Angeles where he died in 1914.

About 1900, William Card Whitcomb became Vice President of the company and soon hired William Frederick Eckert as an engineer. During this time the company was producing knitting machinery and pneumatic mining equipment. In 1907, George D. Whitcomb resigned as an officer of his company, leaving William Whitcomb the president and majority stock owner.

Mules and man power had long been used exclusively as the motive power in moving coal from the mines, but this method was expensive and unsatisfactory. Because of the insistent demand for a more economical method, experiments were being conducted using for power— electricity, compressed air and rope drive. Gasoline engines were definitely a novelty in those early days, nevertheless William Whitcomb, together with Eckert, decided the principle could be successfully applied to a small mine locomotive. In April, 1906 the first successful gasoline locomotive was built and installed in a large Central Illinois coal mine.

Rochelle factory
The Geo D. Whitcomb Company's largest knitting machinery customer was the Vassar Swiss Knitting Company of Rochelle, in northern Illinois. In 1907, the Geo D. Whitcomb Company moved to Rochelle, where they continued to build knitting machinery, and gasoline powered locomotives for coal and metal mining operation. The reputation of the Whitcomb gasoline locomotive spread at such a rapid rate, that before long, greater production facilities were needed. In 1912 the plant was again moved to larger facilities in Rochelle. At that time the company ended its knitting machinery production to concentrate on locomotive production.

George Dexter Whitcomb died in 1914, in Los Angeles, California. His son, William Card Whitcomb, assumed complete control of the company his father founded. Now, William became responsible for performing sales, accounting, engineering and assumed the function as the face of the company.

World War I saw the output of the Whitcomb Plant almost entirely devoted to government orders. Hundreds of armor-plated locomotives were built for overseas service on trench railways in France. These small 6-ton and 9-ton, narrow gauge locomotives proved highly efficient in trench warfare and they were used extensively in hauling needed supplies up to the front lines. In appreciation of their excellent contributions to the war effort, the Whitcomb Company was awarded the "Certificate of Merit" by the United States War Department.

Many new innovations in the locomotive field were being introduced during this period. The first explosion-proof electric mine locomotive was designed and built by Whitcomb, in 1914. After exhaustive tests the United States Bureau of Mines issued Whitcomb a "Permissibility Plate." Whitcomb was the first builder of locomotives for underground work to receive such an endorsement. The first Whitcomb electric trolley locomotive was produced in 1921, and in 1929 Whitcomb engineers designed and built the largest gasoline-electric locomotive that had then been offered to American railroads. This development was closely followed by the diesel-electrics, which revolutionized and forever changed the American rail transportation system.

In September 1926 William Whitcomb now relaxed his personal oversight of the operation of his company. He hired Carl Heim from Chicago, to take over many of the company's operations management, including in the positions of Vice President and Treasurer.

Partin-Palmer automobile
From 1914 to at least 1916 the Geo D. Whitcomb Company assembled Brass Era cars in Rochelle for an automobile company, named Partin-Palmer.

The Partin Mfg. Co. was a large automobile sales agency in Chicago, that in 1913 joined with the Palmer Motor Car Co. of Henry Palmer in Detroit, to manufacture cycle cars, with a model called Partin-Palmer. The company first moved to Chicago to take over the Staver-Chicago automobile factory. By 1914, Partin and Palmer were no longer with the company, and it moved to Rochelle where the Geo D. Whitcomb Company assembled them for a year.

In 1915 the company got into financial trouble in Chicago, and the car's name was changed to Commonwealth (1917-1922). In the 1916 catalog of the Commonwealth Motors Company, it states that Partin-Palmer automobiles were being produced in Rochelle under the personal supervision of Mr. W. C. Whitcomb, Vice-President of the Commonwealth Motors Company. Production moved to Joliet, Illinois. In 1922, Leland Goodspeed designed a new car for the company, which became the Checker Cab.

Baldwin Locomotive Works
Beginning in 1927, the Baldwin Locomotive Works began representing the Geo D. Whitcomb Co. in the sales division, using the global organization of Baldwin to assist Whitcomb in overseas sales. In 1928, Whitcomb and Heim conducted a recapitalization of the Whitcomb Company, and invited Baldwin to participate. Baldwin accepted and purchased about half of the offered stock, with William Whitcomb and Carl Heim remaining in control of the majority of the company stock. In March 1930 Baldwin placed three of its officers on the Whitcomb board of directors, including then Baldwin President George Houston. This gave Baldwin three out of the seven board members.

By late 1930, durng the Depression, The Whitcomb Company was having cash flow problems. Baldwin offered an unsecured loan for $125,000, in the form of a 90-day promissory note issued in December 1930. The condition of the loan was that Baldwin would be given a fourth board member for the duration of the loan, giving Baldwin four out of the seven board members, and so majority control of the board. On March 5, 1931, the bank holding the largest cash reserve of the G. D. Whitcomb Company seized the account to apply towards another debt that the company owed the bank. This left the Geo. D. Whitcomb Company unable to pay its debts.

With a majority of members on the board of directors, Baldwin was able to direct the board to file for voluntary bankruptcy. Although William Whitcomb voted against the action, the bankruptcy was filed in Federal Court in the Northern District of Illinois. This move ended the Whitcomb family ownership of one of the most innovative industrial companies of its time.

In February 1934, William Whitcomb filed suit against Baldwin Locomotive Works in Chicago Circuit Court, to recover the lost value of his company stock. However, after several years of litigation the case was ultimately dismissed in May 1937.

World War II
During World War II the Whitcomb Locomotive Company built road switchers for military service in Europe and the Middle East. The United Kingdom ordered the first fifty two in 1941, from Baldwin Locomotive Works, who allocated the order to their Whitcomb Locomotive Company. They were center-cab Bo-Bo locomotives built as Whitcomb type 65-DE-14, and were followed by variants 65-DE-14A and 65-DE-14B in 1942 and 1943.

They served in the North African Campaign and on military trains in Palestine and Lebanon, and then in the Italian campaign. The order was received by Whitcomb for the new design in December 1941, and the first locomotives were delivered to Africa by June 1942, less than half the normal development time for a new design. By late 1944 the company was producing one 65 ton locomotive a day.

On December 31, 1943, the War Department conferred the Army-Navy Production Award ("E" award) to the Whitcomb Locomotive Company and the presentation ceremony was held in the Rochelle plant on January 26, 1944. By the end of the war two additional stars (each star representing six months) were added for continued production performance.

From this design Whitcomb developed the 65-DE-19A for the US Army Transportation Corps. They were built in 1943 and 1944 and served in many theaters of operations including Great Britain, France, Italy and Belgium.

Post-war
After the war many were sold to civilian railways and industrial railways in the U.S., while others were sold to Canada, Cuba, Mexico, and the Netherlands. However, the Dutch soon found theirs unsatisfactory and replaced both the diesel engines and the electric traction motors in the early 1950s.

Post World War II
Whitcomb continued to expand and progress after the war and the increased volume of business made it essential to expand storage and shipping facilities. A warehouse complete with the latest in material handling equipment was erected in 1947. A ten-ton overhead yard crane was installed to facilitate handling and storage of steel slabs and sheets. During 1948, a combination loading dock and locomotive test building was erected.

End
The last Whitcomb Locomotive Company locomotive manufactured at Rochelle was shipped on January 4, 1952 (construction number 61189). It was a 25-ton diesel-electric locomotive delivered to the Central Procurement Agency of the Transportation Corps. This locomotive was lettered and numbered USN No. 65-00330.

In February 1952 locomotive production was moved from Rochelle in Illinois to Baldwin’s factory in Eddystone, Pennsylvania. Industrial locomotives continued to be built under the Whitcomb name at Eddystone through the end of December 1952, when the name was dropped. All Whitcomb line locomotives built after then carried the B-L-H identification name.

Production of the Whitcomb Locomotive Company line, with the latter ones under B-L-H name, came to an end in March 1956 — after producing approximately 5,000 locomotives. 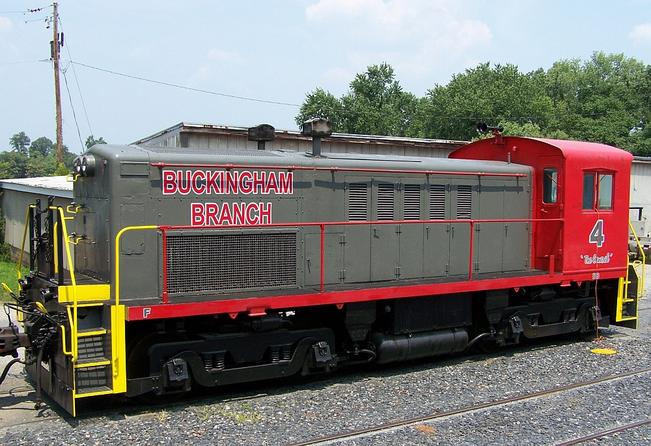 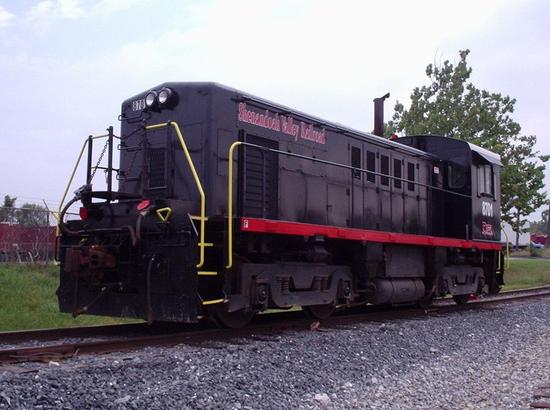 Wanamaker, Kempton and Southern Whitcomb locomotive No. 602 in Lehigh and New England livery in 2008.

Washington and Old Dominion Railroad No. 55, a Whitcomb 75-tonner, at the B&O Riverside Yard in Baltimore in January 1969.  Photo by Roger Puta.