Zephyr Rocket
The Zephyr Rocket was an overnight passenger train operated jointly by the Chicago, Burlington and Quincy Railroad and Rock Island Railroad between Saint Louis, Missouri and the Twin Cities of Saint Paul and Minneapolis, Minnesota. The trains, with coaches and sleeping cars, started operating on January 7, 1941.

In 1964 the train was still earning money above its direct costs, at least for the Chicago, Burlington & Quincy. In 1967 the train, by then coaches-only, was discontinued, with the last trains departing on April 8 and arriving at their respective end points the following morning. 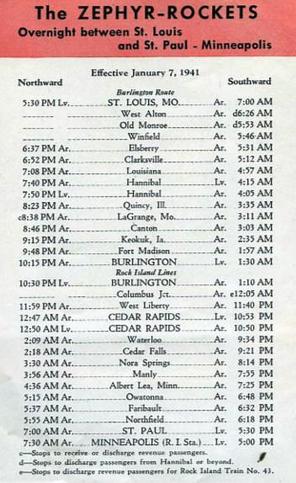 1941 schedule for the jointly operated Zephyr Rockets. The Chicago, Burlington and Quincy and Rock Island Railroads operated this route between St. Louis and Minneapolis/St. Paul from January 7, 1941 until 1967.