By Liesel - based on http://www.lib.utexas.edu/maps/americas/mexico_pol97.jpg Perry-Castañeda Library (PCL) of the University of Texas at Austin, CC BY-SA 3.0, https://commons.wikimedia.org/w/index.php?curid=1322438 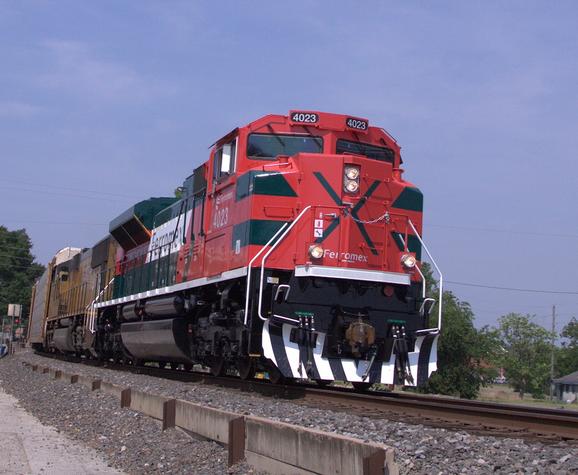 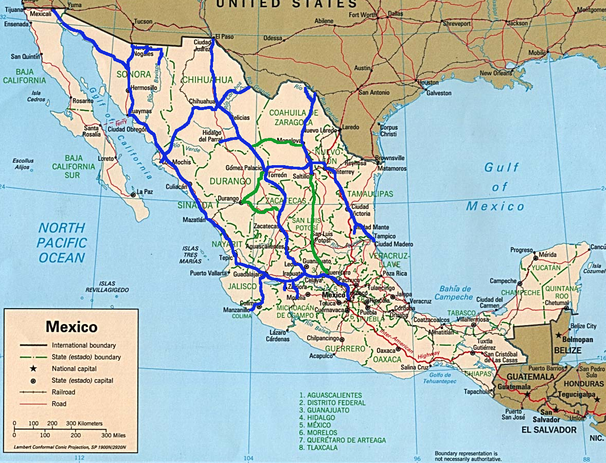 Ferromex No. 4023 in Richmond, Texas operating on Union Pacific trackage. Ferromex
Ferromex (reporting mark FXE) (a contraction and portmanteau of Ferrocarril Mexicano or "Mexican Railway") is a private rail consortium that operates the largest (by mileage) railway in Mexico with combined mileage (Ferromex + Ferrosur) of 7,500 miles (12,070 km).

Description
Ferromex began operating on February 19, 1998, following the privatization of most of the government-owned railways by then President of Mexico Ernesto Zedillo Ponce de León. Ferromex operates more than 9,610 kilometers (5,970 miles) of track and interconnects five major inland Mexican cities, five cities along the border with the United States, four seaports on the Pacific Ocean and one more on the Gulf of Mexico. Currently, Grupo Mexico owns 74% and Union Pacific Corporation owns 26% of the company. The Ferromex System operates 9,610 km of Ferromex tracks plus 2,654 km of Ferrosur tracks.

Protest Incident
In 2014 Ferromex locomotive No. 4041 was at the head of a freight train in Mexico, and when the locomotive neared a grade crossing, it was forced to stop for safety concerns as a group of protesters were blocking the track with tables and banners. The engineer waited for the protesters to clear the tracks before continuing and when this did not happen, the engineer pulled forward, crushing tables and chairs in the process. No one was harmed during the incident.

Merger with Ferrosur
In November 2005, Grupo México, owner of Ferromex purchased Infraestructura y Transportes Ferroviarios, the parent company of Ferrosur, another of Mexico's Class I railroads, in a $309 million stock transaction. The Mexican Federal Competition Commission (CFC) had rejected a proposed 2002 merger of Ferromex and Ferrosur amid opposition from Ferromex competitor, Grupo Transportación Ferroviaria Mexicana (TFM).

Following the November 2005 purchase of Ferrosur by Grupo México, Kansas City Southern de México (KCSM), successor to TFM, petitioned the Mexican government to block the merger of Ferrosur and Ferromex. The CFC rejected the merger in June 2006 stating that the merger would have led to excessive concentration in the railway industry to the detriment of consumers and competing shippers. However, in March 2011, a tribunal ruled in Grupo México's favor, and the merger was permitted.