Ferrocarriles Nacionales de México
Ferrocarriles Nacionales de México, (better known as N de M) was Mexico's state owned railroad company from 1938 to 1998, and prior to 1938 (dating from the regime of Porfirio Díaz) a major railroad controlled by the government that linked Mexico City to the major cities of Nuevo Laredo (Laredo, TX) and Ciudad Juárez (El Paso, TX) on the U.S. border. The first trains to Nuevo Laredo from Mexico City began operating in 1903.

In 1995, the Mexican government announced that the FNM would be privatized and divided into four main systems. As part of the restructuring for privatization, FNM suspended passenger rail service in 1997, and the new arrangements applied from 1998. The companies were Kansas City Southern de Mexico, Ferromex, Ferrosur, and (owned jointly by the three companies) Ferrocarril y Terminal del Valle de México or Ferrovalle which operates railroads and terminals in and around Mexico City.

It was until June 4, 2001 during Vicente Fox Presidency, where FNM was officially extinguished, after a publication in Mexican Official's Gazette. FNM juridic representation will be kept only until liquidation process has been finished.

As of 2006, the remaining parts of NdeM were in the process of liquidation.

Locomotives
During the days of steam locomotives, N de M was best known for operating Niágara class locomotives, which took their name from the New York Central Railroad locomotives of the same wheel configuration. It was also the home of several narrow gauge systems that used steam, both nationally and regionally. N de M was one of the few railroads outside the US to purchase new diesel locomotives from Baldwin Locomotive Works: the only three "Baldwin E-units" ever built ("0660 1000/2 DE"), the DR-12-8-1500/2 "Centipede" and the AS-616. Two of the three 0660 1000/2 DE locomotives had been on major railroads in the United States on a demonstration tour in 1945. N de M bought them and ordered a third in 1946. All three consistently broke down and were retired soon after their factory warranties expired. They do not appear on the 1950 N de M locomotive roster, and sat for years in the scrapyard at San Luis Potosí. Notes in the FNM archives in Puebla, Mexico describe how one of these locomotives had a wheel disintegrate at high speed, and also how the Centipede locomotives were delivered in 1948 with parts missing.

In Acámbaro, Guanajuato, N de M operated one of the few facilities in Latin America that was capable of constructing and doing complete rebuilds of steam locomotives, thus with rare exceptions (as with the Niagaras), most of N de M steam motive power was purchased used and rebuilt there. Portions of the facility and a preserved 2-8-0 steam locomotive remain as part of Acambaro's municipal railway museum.

Buenavista Station in Mexico City has been renovated and is now the southern end of the new electric Tren Suburbano line. Photos of Buenavista often prominently feature a pyramid-like tower, the Torre Insignia. The building housed the headquarters of Banobras, but currently is unoccupied and it has been renovated. A preserved Niagara steam locomotive and GE boxcab can be viewed at the Museum of Electricity at Chapultepec, Mexico City. Many more preserved Mexican steam, diesel and electric locomotives can be viewed at the FNM museum in Puebla, Mexico.

In popular culture
In 1999, sound artist and musician Chris Watson worked as an audio recorder for the BBC riding the "Ghost Train" in the fourth episode of the fourth season of the television documentary series Great Railway Journeys. Having spent between five weeks and a month on the journey, Watson used to the field recordings for his 2011 album El Tren Fantasma.

In 2016, a fictional character named Carlos introduced in the Thomas & Friends movie The Great Race was based on the preserved ex-Ferrocarriles Nacionales de México 2-8-0 steam locomotive No.903. 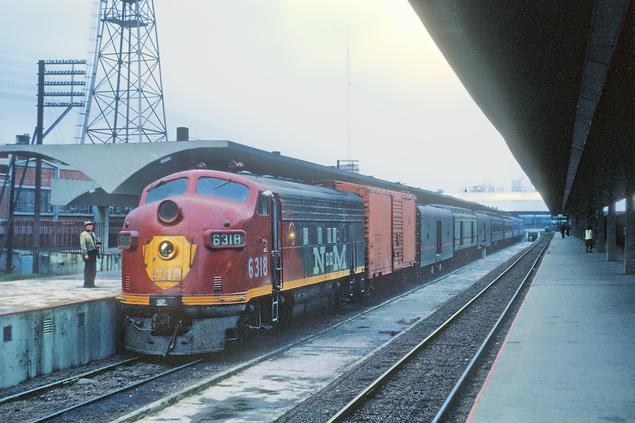 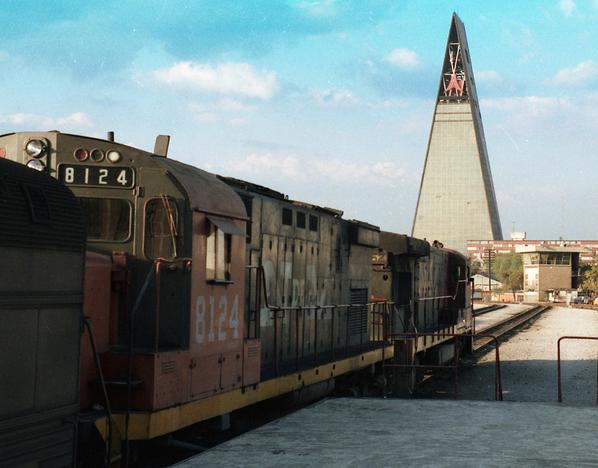