Rail Transport in Mexico
Mexico has a freight railway system owned by the national government and operated by various entities under concessions (charters) granted by the national government. The railway system provides freight and passenger service throughout the country (the majority of the service is freight-oriented), connecting major industrial centers with ports and with rail connections at the United States border. Passenger rail services were limited to a number of tourist trains between 1997, when Ferrocarriles Nacionales de México suspended service, and 2008, when Ferrocarril Suburbano de la Zona Metropolitana de México inaugurated Mexico's first commuter rail service between Mexico City and the State of Mexico. This is not including the Mexico City Metro, which started service in 1969.

History
Construction
Mexico's rail history began in 1837, with the granting of a concession for a railroad to be built between Veracruz, on the Gulf of Mexico, and Mexico City. However, no railroad was built under that concession.

In 1857, Don Antonio Escandon secured the right to build a line from the port of Veracruz to Mexico City and on to the Pacific Ocean. Revolution and political instability stifled progress on the financing or construction of the line until 1864, when, under the regime of Emperor Maximilian, the Imperial Mexican Railway Company began construction of the line. Political upheaval continued to stifle progress, and the initial segment from Veracruz to Mexico City was inaugurated nine years later on January 1, 1873 by President Sebastián Lerdo de Tejada.

President Lerdo and his successor Porfirio Díaz encouraged further rail development through generous concessions that included government subsidies for construction. At the beginning of his first term Díaz inherited 398 miles (640.5 km) of railroads consisting almost exclusively of the British-owned Mexican Railway. By the end of his second term in 1910, Mexico boasted 15,360 miles (24,719.5 km) of in-service track, mostly built by American, British and French investors.

Growing nationalistic fervor in Mexico led the Díaz administration to bring the bulk of the nation's railroads under national control through a plan drafted by his Minister of Finance, José Yves Limantour. The plan, implemented in 1909, created a new government corporation, Ferrocarriles Nacionales de México (FNM), which would exercise control of the main trunk rail lines through a majority of share ownership.

Nationalization
The rail system deteriorated greatly from neglect during the period of the Mexican Revolution. Following the Revolution, the entirety of the Mexican rail system was nationalized between 1929 and 1937. In 1987 the government merged its five regional railroads into FNM. During the later period of national ownership, FNM suffered significant financial difficulties, running an operating deficit of $552 million (37 percent of its operating budget) in 1991. Competition from trucking and shipping decreased railroad's share of the total freight market to about 9 percent, or about half of rail's share a decade earlier.

Privatization
In 1995, the Mexican government announced that the FNM would be privatized and divided into four main systems. As part of the restructuring for privatization, FNM suspended passenger rail service in 1997.

In 1996, Kansas City Southern (KCS), in a joint venture with Transportacion Maritima Mexicana (TMM), bought the Northeast Railroad concession that linked Mexico City, Monterrey, the Pacific port at Lázaro Cárdenas and the border crossing at Laredo. The company was initially called Transportación Ferroviaria Mexicana (TFM), but was renamed Kansas City Southern de México (KCSM) in 2005 when KCS bought out TMM's interests. KCS's systems in the United States and Mexico jointly form end-to-end rail system linking the heartlands of Mexico and the United States.

The Northwest Railroad concession, connecting Mexico City and Guadalajara with the Pacific port of Manzanillo and various crossings along the United States border was sold to a joint venture between Grupo Mexico and Union Pacific Railroad in 1998 during the presidency of Dr. Ernesto Zedillo (which later occupied the position of Director of the Board of Union Pacific). The company operates as Ferrocarril Mexicano or Ferromex. Ferromex's freight volumes have increased; it hauled a record 22,365 million tonne-km in the first 6 months of 2010. Also, Ferrosur, the railroad serving Mexico City and cities/ports southeast of Mexico City, hauled their own record 3,565 million tonne-kilometers.

There were two southern concessions, merged in 2000 to form Ferrosur. Ferrosur operates the line between Mexico City and the Gulf of Mexico port of Veracruz. In 2005, Ferrosur was bought by Ferromex's parent company. KCSM challenged the acquisition and the merger failed to receive regulatory approval. However, in March 2011, a tribunal ruled in Grupo Mexico's favor, and the merger was permitted.

High-speed rail
The Secretariat of Communications and Transport of Mexico proposed a high-speed rail link that will transport its passengers from Mexico City to Guadalajara, Jalisco, with stops in the cities of Querétaro, Guanajuato, Leon and Irapuato; and a connected line running from the port city of Manzanillo to Aguascalientes. The train would travel at 300 km/h, and would allow passengers to travel from Mexico City to Guadalajara in just 2 hours at an affordable price (the same trip by road would last 7 hours). The network would also be connected to Monterrey, Chilpancingo, Cuernavaca, Toluca, Puebla, Tijuana, Hermosillo, Cordoba, Veracruz, Oaxaca, Colima, Zacatecas, Torreon, Chihuahua, Puebla, San Luis Potosi, Mexicali, Saltillo, and Acapulco by 2015. The whole project was projected to cost 240 billion pesos, or about 25 billion dollars.] Mexican billionaire Carlos Slim expressed an interest in investing in high-speed rail.

Revival of passenger service
Proposed projects are Mexico City-Toluca (construction began July 7, 2014), the Peninsular train (Yucatán-Mayan Riviera), Mexico-Querétaro high speed train starts construction October 2014 and will operate speeds up to 300 km/h (with expansion to Guadalajara) and Puebla-Tlaxcala-Mexico City. On nov 3 2014, China Railways Construction Corporation associated with Prodemex, Teya and GHP has won the contract to build the high Speed train Mexico City-Querétaro. The estimated cost will be close to 4 billion dollars, to be finished by the end of 2017 and will be fully operational by spring 2018.

Museums
There are several rail museums in Mexico including: the Old Railway Station Museum in Aguascalientes, Aguascalientes; a former station along the Interoceanic Railway of Mexico in Cuautla, Morelos which serves as a museum; the Museo de las Ferrocarilles en Yucatán is in Mérida, Yucatán; and the National Railway Museum in Puebla, Puebla. 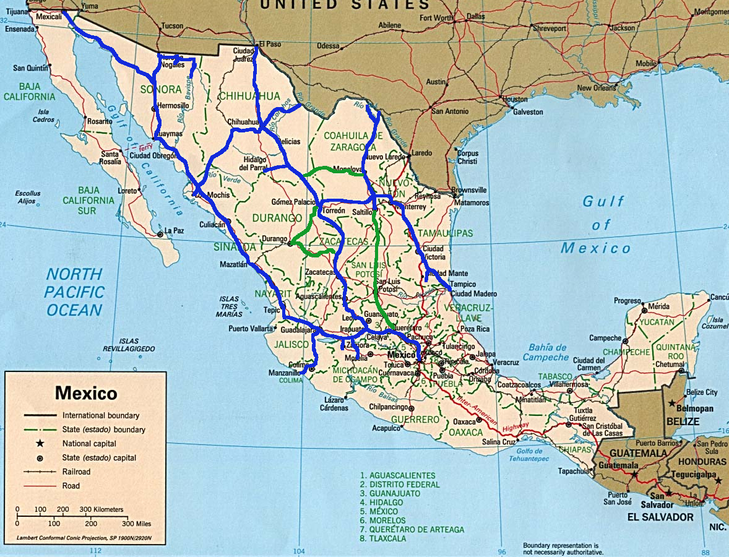 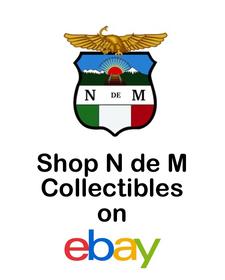 A Map of the Ferromex Railway system. Blue own rails, trackage rights in green.

By Liesel - based on http://www.lib.utexas.edu/maps/americas/mexico_pol97.jpg Perry-Castañeda Library (PCL) of the University of Texas at Austin, CC BY-SA 3.0, https://commons.wikimedia.org/w/index.php?curid=1322438