In fiction
The 20th Century Limited was the setting for a Broadway musical composed by Cy Coleman and written by Betty Comden and Adolph Green entitled On the Twentieth Century, about the romantic complications of a beautiful actress and an egocentric producer/director. Madeline Kahn and John Cullum starred in the award-winning production (five Tony Awards out of nine nominations), whose spectacular production design featured both the lavish Art Deco details of the time period as well innovative staging to open up what could be cramped quarters inside a train car. The musical was based on the 1932 Ben Hecht-Charles MacArthur stage play of the same subject, which in 1934 they adapted as a film entitled Twentieth Century, directed by Howard Hawks, with Carole Lombard and John Barrymore in the lead roles. The train also figured prominently as a setting for major scenes in both Alfred Hitchcock's North by Northwest and George Roy Hill's The Sting. While doing research for her novel Atlas Shrugged, Ayn Rand learned the operation of the train and subsequently devised a fictional company - the "Twentieth Century Motor Company" - which would be important to the novel's plot.

The Flight of the Century

1912 ad for the New York Central New York - Chicago express train 20th Century Limited as "The Most Famous Train In The World".

Its style was described as "spectacularly understated ... suggesting exclusivity and sophistication". Passengers walked to the train on a crimson carpet which was rolled out in New York and Chicago and was designed for the 20th Century Limited. "Getting the red carpet treatment" passed into the language from this memorable practice.  "Transportation historians", said the writers of The Art of the Streamliner, "consistently rate the 1938 edition of the Century to be the world's ultimate passenger conveyance—at least on the ground".

History
Inaugurated on June 17, 1902 by patent medicine salesman turned passenger agent George Henry Daniels, the train offered a barbershop and secretarial services.  The train arrived in Chicago three minutes ahead of schedule; the schedule was twenty hours, four hours less than before. The New York Times report laid great stress on the routine nature of the trip, with no special procedures being followed and no extra efforts being made to break records. It stated that there "...was no excitement along the way," and quoted a railroad official's claim "...it is a perfectly practical run and will be continued," and engineer William Gates maintaining "This schedule can be made without any difficulty. I can do it every time, barring accidents."

Shortly after the announcement of the fluorescent lamp, the cars of the 20th Century Limited were lit with this new type of lamp.

In 1938 industrial designer Henry Dreyfuss was commissioned by the New York Central to design streamlined train sets in Art Deco style, with the locomotive and passenger cars rendered in blues and grays (the colors of NYC). The streamlined sets were inaugurated on June 15, 1938. His design was probably the most famous American passenger train.  Like many express passenger trains through the mid-1960s, the 20th Century Limited carried an East Division (E.D.) Railway Post Office (R.P.O.) car operated by the Railway Mail Service (RMS) of the United States Post Office Department which was staffed by USPOD clerks as a "fast mail" on each of its daily runs. The mails received by, postmarked, processed, sorted, and dispatched from the 20th Century Limited 's RPOs were either canceled or backstamped (as appropriate) during the trip by hand applied circular date stamps (CDS) reading "N.Y. & CHI. R.P.O. E.D. 20TH CEN.LTD." and the train's number: "25" (NY-CHI) or "26" (CHI-NY).

In 1945 EMD diesel-electrics replaced steam, and a new diesel-electric-powered trainset was commissioned. The replacement was inaugurated by General Dwight D. Eisenhower in September 1948. This set was featured in postwar films such as North by Northwest and The Band Wagon.

For much of its history before 1957, the all-Pullman train made station stops only at GCT and Harmon for New York–area passengers and LaSalle Street Station and Englewood for Chicago-area passengers. These traveled in as many as seven sections, of which the first was named The Advance 20th Century Limited.  By the late 1950s the train was in decline. On December 2, 1967, at 6:00 P.M., the half-full train left GCT, track 34 for the last time.  As always, carnations were given to men and perfume and flowers to women boarding the train.  The next day, it straggled into LaSalle Street Station in Chicago 9 hours 50 minutes late due to a freight derailment near Conneaut, Ohio.

Amtrak now operates the Lake Shore Limited between New York's Penn Station and Union Station in Chicago. Otherwise it follows a route similar to the 20th Century's, except west of Whiting, Indiana (near Chicago), where it switches to the former Pennsylvania Railroad's Pittsburgh, Fort Wayne and Chicago Railway. 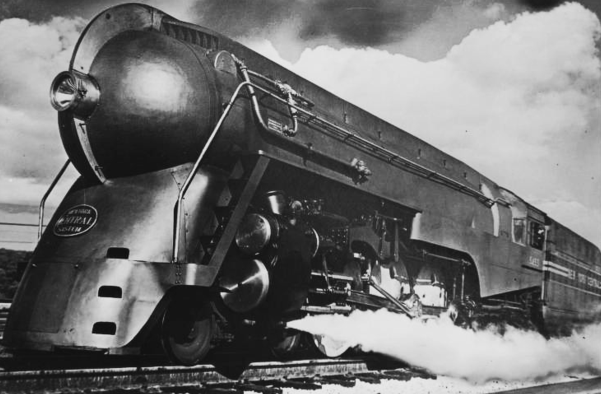 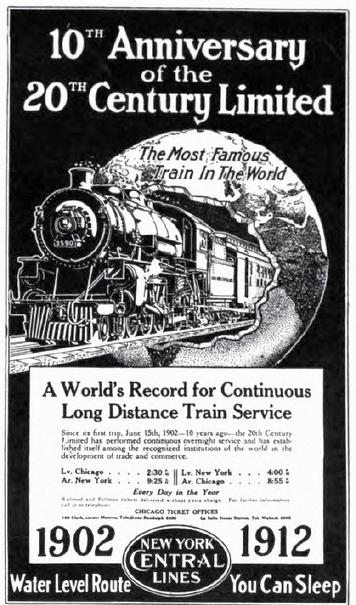 The 20th Century Limited was an express passenger train on the New York Central Railroad from 1902 to 1967, advertised as "The Most Famous Train in the World".  In the year of its last run, The New York Times said that it "...was known to railroad buffs for 65 years as the world's greatest train".  The train traveled between Grand Central Terminal (GCT) in New York City and LaSalle Street Station in Chicago, Illinois along the railroad's "Water Level Route".

The NYC inaugurated this train as competition to the Pennsylvania Railroad, aimed at upper class and business travelers. It made few station stops along the way and used track pans to take water at speed. Beginning on June 15, 1938, when it got streamlined equipment, it ran the 958 miles in 16 hours, departing New York City at 6:00 P.M. Eastern Time and arriving at Chicago's LaSalle Street Station the following morning at 9:00 A.M. Central Time, averaging 60 miles per hour. For a few years after World War II the eastward schedule was shortened to 15½ hours. 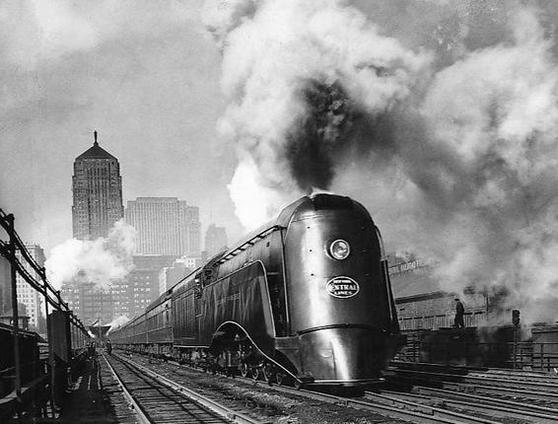