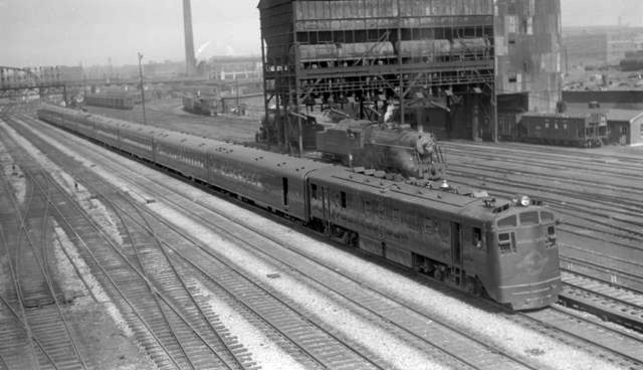 Postcard photo of the observation car of the Gulf, Mobile and Ohio Railroad's "Abraham Lincoln".  The train was formerly with the Alton Railroad. In the foreground is parlor-observation car No. 5998, originally built in 1935 for the Royal Blue by American Car and Foundry. Circa 1970.

American Car and Foundry (ACF) constructed two lightweight trainsets for the B&O, one for the Abraham Lincoln and one for the Royal Blue, which ran between New York City and Washington, D. C.. Each trainset consisted of eight cars: a baggage/mail car, three coaches, a lunch counter/diner, two parlor cars, and a parlor-observation car.

The Gulf, Mobile and Ohio ordered additional chair and parlor cars from ACF in 1947 but otherwise made few changes to the trains' equipment. The new cars seated 68 and 31, respectively. 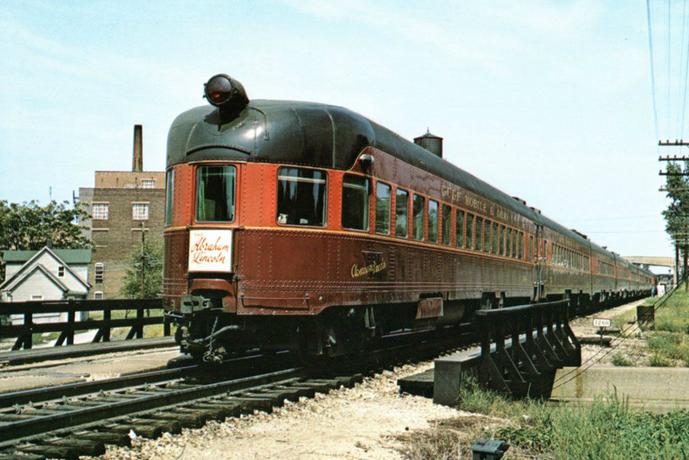 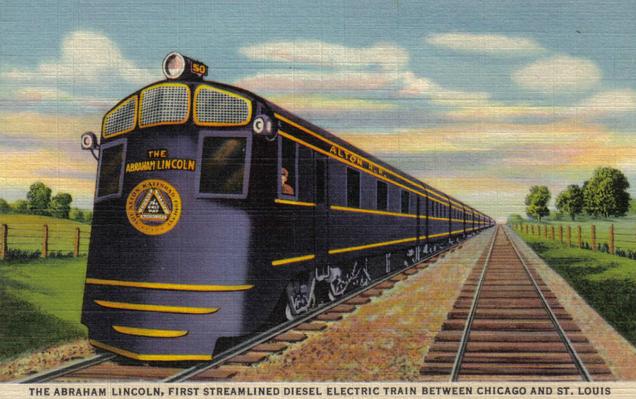 A postcard view of the Alton Railroad's streamlined Abraham Lincoln train, circa 1939.

The Abraham Lincoln was a named passenger train operated by the Baltimore and Ohio Railroad from 1935 into the 1960s. The "Abe Lincoln" ran between Chicago and St. Louis on the B&O's subsidiary Alton Railroad. The train later passed to the Gulf, Mobile and Ohio Railroad, and then finally to Amtrak, which retained the name until 1978. Service between Chicago and St. Louis is now known by the umbrella term "Lincoln Service".

History
Pre-Amtrak
The original streamlined Abe Lincoln was one of two non-articulated, streamlined trains built with government assisted funding in 1935. The locomotive, B&O No. 50, was powered by an 1800-hp box-cab diesel made by EMC. After delivery, No. 50 was retrofitted with a quasi-streamlined, sloped front end. The Abraham Lincoln continued to operate following the Alton Railroad's merger with the GM&O in 1947, and one of the streamliner trainsets survived into the 1960s.

Amtrak
Following its takeover of most passenger rail service in the United States on May 1, 1971, Amtrak retained the Abraham Lincoln as a daily Chicago-St. Louis service, operating in tandem with the GM&O's old Limited. In November of that year Amtrak extended both the Abraham Lincoln and the Limited (now known as the Prairie State) through Chicago to Milwaukee, Wisconsin. In October 1973 replaced the rolling stock with the new Turboliner; as part of this change the trains were re-branded as Turboliners the schedules truncated to Chicago. In February 1976 Amtrak returned conventional rolling stock to the route and revived the Abraham Lincoln name along with the Ann Rutledge. Amtrak added the State House to the Chicago-St. Louis corridor in 1977; in 1978 it dropped the Abraham Lincoln name altogether. Today service between Chicago and St. Louis is handled by the "Lincoln Service".