Name Change and Discontinuation of Service
GMO dropped "Alton" from the train's name in 1958, and it was known as the "Limited" until it was discontinued upon Amtrak's takeover of passenger operations in May 1971.

Scale models
O-scale models of the Alton Limited's Pacifics or passenger cars have been produced at different times by Lionel, MTH, and K-Line. K-Line's 6-car heavyweight set (K-44081) is modeled on the 1924 equipment, and includes the "Armstrong" RPO, No. 707 baggage car, "Webster Groves" coach, "Springfield" diner, "Wilson" parlor, and "Chicago" observation, all 18 inches long, or 72' scale. 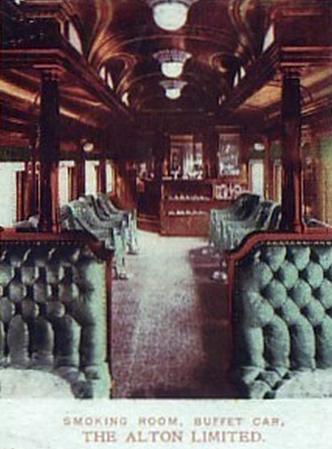 Postcard photo of the smoking room in the buffet car of the Alton Limited.

By 1905, it provided regular, daily service with six new cars strikingly decorated in three shades of maroon, with gold stenciling, which led to the nickname, "The Red Train." The six-car consist included a RPO car, a combine car, a coach, a diner, and two Pullman parlor cars, one of which was the observation car. The cars were richly appointed, and the Alton Limited was advertised as "The Only Way" and as "The Most Beautiful Train In America!"

The last ten Brooks/ALCO class P-5 Pacific engines were delivered to the C&A in 1913. Two six-car train sets were re-equipped in 1924 at a cost of a million dollars. The "Chicago" observation parlor car included a Japanese tea room and a library, and was 90' long. With its blended red color scheme, it was then billed, "The Handsomest Train In The World."
The Pacific-pulled heavyweight consists were still in operation as late as 1947, though C&A was acquired that year by the Gulf, Mobile & Ohio Railroad (GMO). GMO replaced the Pacific engines with diesel-electric engines, and replaced the heavyweight consist with lightweight, streamlined cars from American Car and Foundry. GMO adopted a variation of the Alton Limited's maroon and red livery for its own streamliners.

The Alton Limited was the Chicago & Alton Railway's flagship service between Chicago and St. Louis. It was introduced in 1899, and reequipped in 1905, and in 1924.

History
Starting in 1903, its motive power was a series of 4-6-2 Pacific steam locomotives.