The observation car bringing up the rear of the westbound Ambassador, departing Union Station Washington, D.C. in 1961.
By © by James G. Howes, Attribution, https://commons.wikimedia.org/w/index.php?curid=6590579

In 1961, as railroad passenger traffic was declining, The Ambassador became just a section of the combined Capitol Limited - Columbian. It had one coach, a sleeping car, and a combination sleeper-lounge. The train operated separately from Willard, Ohio to Detroit with a dining car added.

In 1964, The Ambassador name disappeared entirely, and the train was renamed the Capitol-Detroit. Now that the Chesapeake and Ohio Railroad had acquired control of the B&O, the train was rerouted over the C&O from Toledo to Fort Street Union Depot.

Notable incidents
On September 24, 1942, The Ambassador ran into the back of the Cleveland Express near Dickerson, Maryland northwest of Washington, DC.  Sadly, twelve passengers and two crewmen were killed in the worst accident that the B&O had suffered since 1907.

On the night of March 9, 1949, as the Ambassador was leaving Martinsburg, West Virginia, two young men riding on the train as passengers began robbing other passengers, then walked through the train and its diesel locomotives to the head end and forced the engineer to back the train back to a grade crossing, where they got off. The robbers then held up a nearby tavern, stole a car, and later caught a bus, winding up in Washington, DC, the next day. Police, acting on a tip, arrested the two at a pawn shop, wounding one who drew a gun on the officers. The story made national headlines, and the pair were subsequently sentenced to twenty years in federal prison.

The route of the Ambassador (in orange). 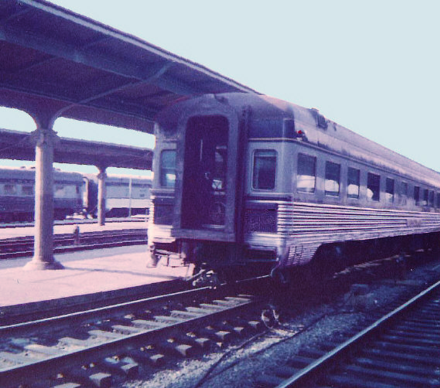 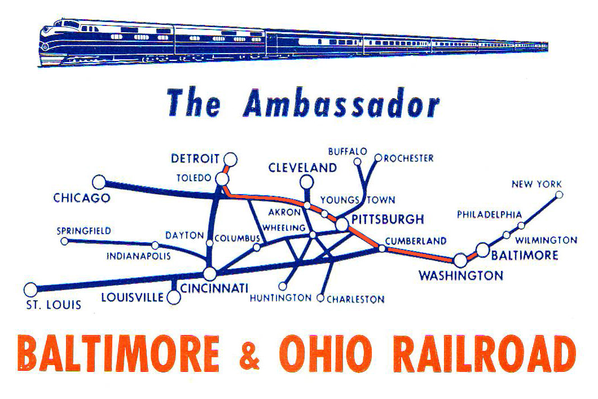 The Ambassador was a named train of the Baltimore and Ohio Railroad (B&O) on its route between Baltimore, Maryland and Detroit, Michigan with major station stops in Washington, D.C. and Pittsburgh, Pennsylvania and Toledo, Ohio. Inaugurated in 1930, the Ambassador was discontinued in 1964.

History
The B&O began passenger service from Detroit to Washington, D.C. in 1920. Until 1925, the B&O offered a through Washington - Detroit Pullman sleeping car running on a Washington-Chicago train to Deshler, Ohio then added to a Cincinnati - Detroit train.

In June 1925, the B&O started a through overnight Washington - Detroit train named the Washington-Detroit Limited (although it actually originated in Baltimore). This train operated coaches, a dining car, a lounge car, and sleepers. In 1930, this train was renamed The Ambassador. The train typically used the cutoff through North Baltimore, Ohio skipping Deshler. Up through 1946, it operated into Fort Street Union Depot in Detroit, then B&O moved operations to the landmark Michigan Central Station.