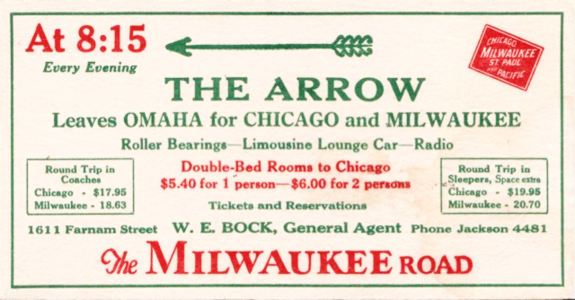 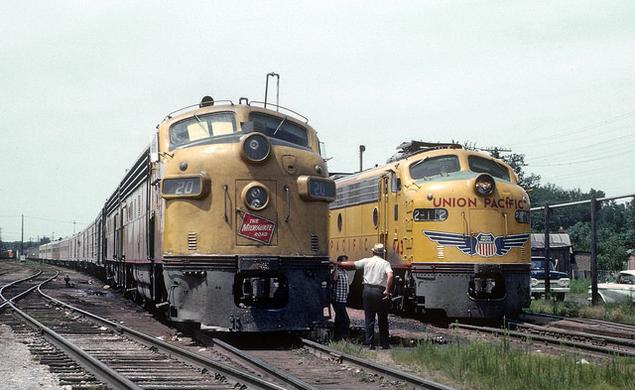 The Arrow was a passenger train operated by the Chicago, Milwaukee, St. Paul and Pacific Railroad (the "Milwaukee Road") between Chicago, Illinois and Omaha, Nebraska. It operated from 1926 until 1967. The Arrow provided overnight service between the two cities and included through cars for other destinations in Iowa.

History
The Milwaukee Road introduced the Arrow in August of 1926, replacing two previous services: the Omaha Limited (Chicago–Omaha) and Sioux City Limited (Chicago–Sioux City). The new train served both Omaha and Sioux City (for Sioux Falls, South Dakota), splitting in Manilla, Iowa. Through connections with other trains the Arrow also carried Chicago–Des Moines, Iowa and Milwaukee, Wisconsin–Omaha sleeping cars (via the Southwest Limited). The train made the run between Chicago and Omaha in 13 hours and 20 minutes. In 1934 the Milwaukee Road extended the Arrow over the Big Sioux River to Sioux Falls.

The train was the overnight equivalent of the Milwaukee Road's daylight scheduled Midwest Hiawatha. The Omaha sleeping car ended in early 1955, was reinstated later that year when the Milwaukee Road began handling the Union Pacific Railroad's Overland Route trains, and ended for good in 1958. Between 1956–1959 the Arrow carried a Chicago–Los Angeles coach which it exchanged in Omaha. The Sioux Falls section, including the train's last sleeping cars, ended on September 17, 1965. All that remained of the Arrow was a Chicago–Omaha coach train, which the Milwaukee Road discontinued on October 5, 1967.