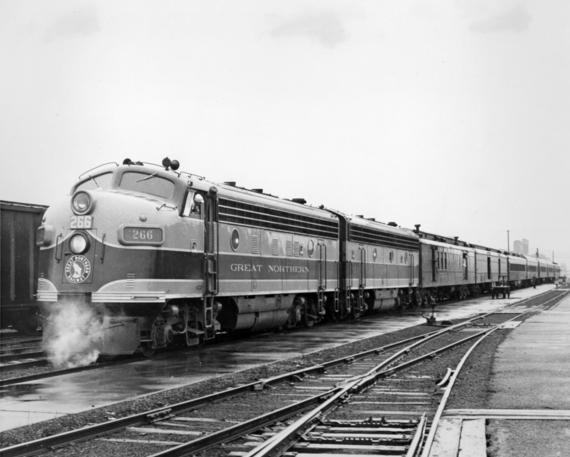 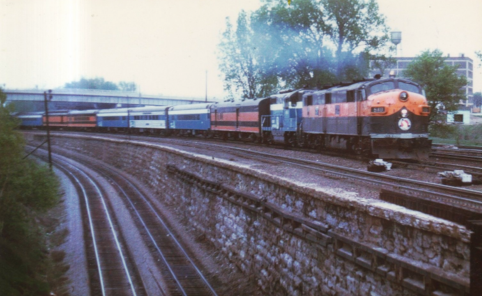 The Gopher and Badger

The Gopher and Badger were trains operated by the Great Northern Railway between Saint Paul, Minnesota and the Twin Ports of Superior, Wisconsin and Duluth, Minnesota. The Great Northern introduced the services with two six-car streamlined trainsets on April 26, 1952. The two consists operated as the Badger for the morning trains No. 19 and No. 20, which operated in both directions as all-stop locals in 3 hours 58 minutes over the 160-mile route. The late afternoon/early evening trains No. 23 and No. 24 operated as the Gopher, over the same route, but as limited-stop express trains in 3 hours 30 minutes. In addition to Saint Paul and the Twin Ports, the Gopher stopped in Minneapolis, Cambridge, and Sandstone, Minnesota, nearly the same route as the proposed Northern Lights Express, except the NLX is not currently planned to serve Saint Paul.

The trains utilized six of the pre-World War II Empire Builder 58-seat luxury coaches, with four of these remaining as-built, and two converted to 44-seat coaches with galley for train service by an attendant at one's seat. Each consist was assigned a baggage/railway post office car with a 30-foot RPO section; initially, one consist operated with a heavyweight, the other a lightweight. Each consist also carried a streamlined baggage express car built by the Great Northern Railway themselves; this car only operated in each day's Gopher schedule. Each consist then carried one of the 44-seat galley coaches and two of the 58-seat luxury coaches. The last car in each consist was a café parlor observation rebuilt by GN shops from heavyweight coaches the railroad had purchased at the beginning of the war from Pullman as parlor cars for rebuilding as coaches.

The entire consists were painted in Omaha Orange and Pullman Green paint with the gold Scotch-lite lettering and separation stripes paint scheme most commonly referred to as "Empire Builder". Even as there were variations in the consists regarding the baggage/railway post office cars, the power was even more interesting with one set powered by an A-B set of EMD F7s and the other train set powered by an EMD E7A.