The "Black Hawk" being pulled by the mighty Aeolus streamlined locomotive in 1939. 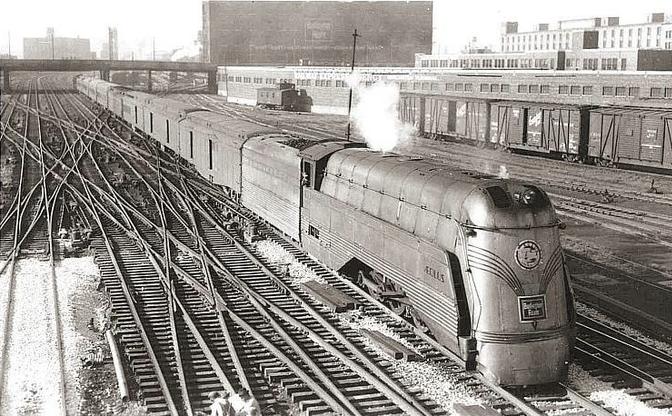 During its final years, the Black Hawk provided an eastbound connection with the Northern Pacific Railway'sMainstreeter, and the Great Northern Railway's Western Star. By the late 1960's it was actually combined with the Western Star both ways, and with the Mainstreeter westbound.

The Black Hawk was discontinued after its final run on the night of April 12–13, 1970, six weeks after the CB&Q had been merged into Burlington Northern on March 2.

The Black Hawk
The Black Hawk was a named passenger train operated by the Chicago, Burlington and Quincy Railroad (CB&Q) between Chicago, Illinois, and Minneapolis/St. Paul, Minnesota. (The CB&Q was also commonly known as the "Burlington Route".) The train operated on an overnight schedule, being the nighttime counterpart to the Twin Zephyrs. It was a competitor in the Chicago-Twin Cities overnight train market to the Pioneer Limited of the Chicago, Milwaukee, St. Paul and Pacific Railroad (commonly known as the "Milwaukee Road") and the North Western Limited of the Chicago and North Western.

In common with its competitors listed above, the Black Hawk carried both sleeping cars and coaches. With departure well past dinnertime, breakfast was the only meal provided by the train's diner or diner-lounge car, in addition to "evening refreshments" upon departure. In later years breakfast became Continental in nature.