The line was conceived by company president Allen Manvel as a means to "signify completion of the basic Santa Fe system." Manvel felt he could attract business and enhance the prestige of the railroad with daily first-class service from Chicago to the West Coast. The California Limited, billed as the "Finest Train West of Chicago," made its first run on November 27, 1892.

The California Limited was withdrawn on June 15, 1954, giving it the longest tenure of any train on the Chicago-Los Angeles run of the Santa Fe.

History
The Santa Fe introduced the California Limited on November 27, 1892. The journey took 83 hours and 50 minutes and required fifteen locomotive changes. During the summer multiple sections were necessary to accommodate demand; reportedly 23 sections once operated from Chicago on one day. The train carried just Pullman sleeping cars (no coaches) until 1938.

In October 1953 it was scheduled to leave Los Angeles at 1815 with coaches and sleepers-- no diner and no lounge. Breakfast stop at Seligman, lunch stop at Winslow, dinner stop at Albuquerque; next morning at La Junta it would add a diner for the rest of the run to Chicago (scheduled arrival 0830). It ran via Pasadena, Great Bend and Topeka.

A 1910 magazine advertisement for the California Limited. 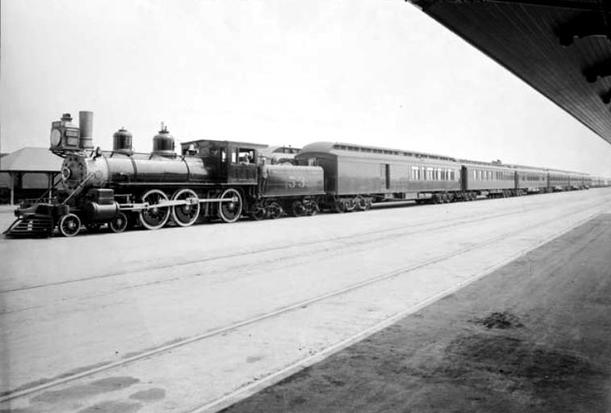 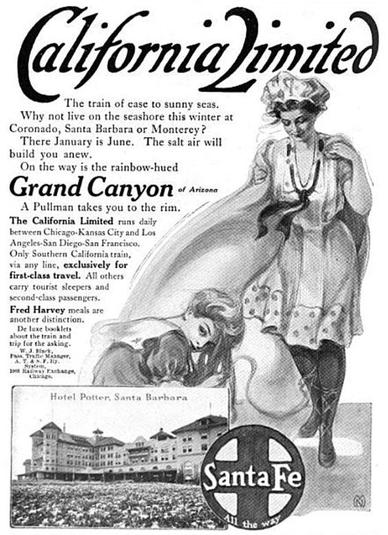 The California Limited in Los Angeles, California with engine No. 53 at the La Grande Station, circa 1899.

November 27, 1892: Regular service begins.
1893: The train receives four new dining cars designed by Barney & Smith.
May 4, 1896: Service suspended.
November 1896: Regular service resumes.
November 1898: Westward schedule drops to 67 hr 50 min, about as good as it ever did until it dropped to 63 hours in June 1929.
1899: The Limited is reduced to four trains per week.
1902: The train resumes daily service on a 68-hour schedule.
October 1923: Walt Disney and his brother Roy O. Disney travel to California aboard the California Limited.
April 1, 1938: The Limited is suspended.
May 22, 1938: Regular service resumes.
September 4, 1945: The second section of Train No. 4 enters a siding near milepost 126 in the City of Santa Anita, California at excessive speed and derails. Some 200 people are injured, five fatally. One cleanup worker dies the following day in a freak accident.
June 15, 1954: The California Limited is withdrawn.