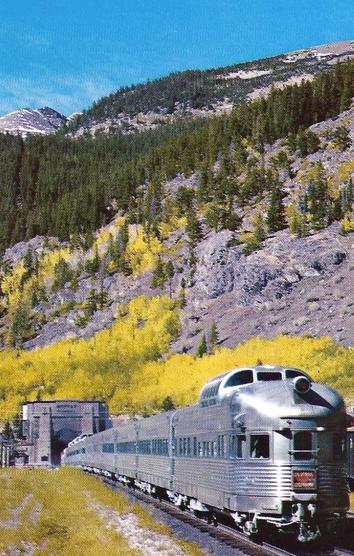 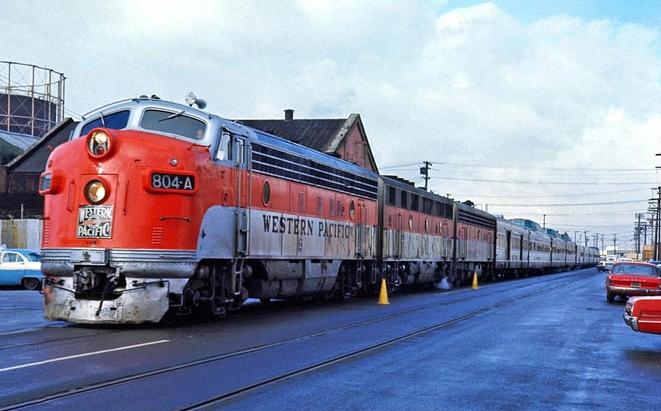 The California Zephyr prior to its first run in 1949. 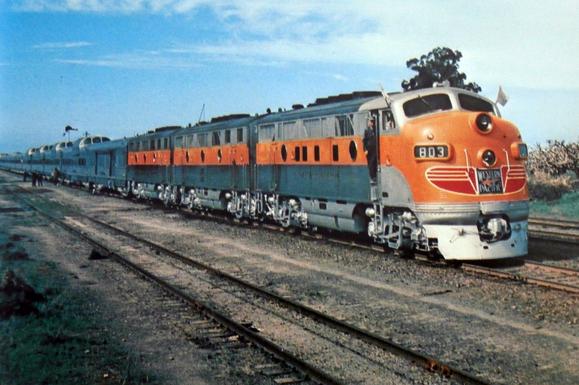 The Western Pacific applied to discontinue its portion in 1966 but the Interstate Commerce Commission (ICC) refused after public outcry. The D&RGW made the same request in 1969 and in 1970 the ICC permitted Western Pacific to end its portion, provided the D&RGW and Burlington provide "some semblance of [service]" between Chicago and Ogden, Utah. The last westbound California Zephyr to the west coast left Chicago on March 22, 1970 and arrived in Oakland two days later. The California Zephyr had operated for 21 years and 2 days. East of Salt Lake City the train was reduced to a tri-weekly schedule, operating as California Service on the Burlington and as the Rio Grande Zephyr on the Rio Grande. The Rio Grande portion of the train was extended beyond Salt Lake to Ogden, Utah, allowing Nevada and California passengers to connect to the Southern Pacific Railroad's City of San Francisco. This continued until the creation of Amtrak on May 1, 1971.

Route Overview
The California Zephyr begins its westbound journey at Chicago's Union Station . Passengers see the Chicago River and central Chicago as the train eases out of the station. The train soon leaves the urban zone behind, and crosses the open prairie of central Illinois, southern Iowa, Nebraska, and Colorado. The following morning, the train pulls into Denver's Union Station.

After Denver, the California Zephyr climbs the Front Range of the Rocky Mountains, passing through resort towns like Winter Park and Glenwood Springs as it follows the path of the Colorado River. Soon, the East- and West-bound trains pass each other, high in the mountains. The train continues following the increasingly-larger Colorado River, leaving the Rockies behind. The train crosses into Utah after sunset, and stops in Salt Lake City (typically before Midnight).

The bulk of the night passes as the train clears the salt flats west of Salt Lake City before entering the Great Basin of northern Nevada. In the late morning, the train arrives in Reno, gateway to the Sierra Nevadas. Early afternoon of day three, the train goes through the extraordinary scenery of the Sierra Nevada mountains, gradually descending to Sacramento. A couple of hours later (approximately 6PM) the California Zephyr arrives in Emeryville.

Passengers continuing on to San Francisco can use an Amtrak-provided bus or connect to public transit (AC Transit buses or BART commuter rail) out of Oakland via a free shuttle out of Emeryville.

The California Zephyr is timed so passengers will see the most-scenic points of the Sierras and Rockies, regardless of direction traveled.

The total route length of the Zephyr is just over 2,400 miles.

The original California Zephyr operated over the Chicago, Burlington and Quincy Railroad from Chicago to Denver, Colorado, the Denver and Rio Grande Western Railroad between Denver and Salt Lake City, Utah, and the Western Pacific Railroad from Salt Lake City to Oakland, California. Cars owned by different railroads ran together; cars cycled in and out for service, repairs, and varying passenger loads with the seasons.

The first train was named in San Francisco by Eleanor Parker while California Lieutenant Governor Goodwin Knight, mayor of San Francisco Elmer Robinson, and WP President Harry A. Mitchell looked on. For the inaugural run in 1949, every female on the train was given "silver" and orange orchids flown from Hilo, Hawaii. The car hostesses were known as "Zephyrettes." In summer 1954 the schedule for 2,532 miles Chicago to San Francisco was 50 hr 50 min.

The California Zephyr
Before Amtrak, the California Zephyr (the CZ, or "Silver Lady") was a passenger train operated by the Chicago, Burlington & Quincy (CB&Q), Denver & Rio Grande Western (D&RGW) and Western Pacific railroads, all which dubbed it "the most talked about train in America" on March 19, 1949, with the first departure the following day. It was scheduled to pass through the most spectacular scenery on its route in the daylight. The original train ceased operation in 1970, though the D&RGW continued to operate its own passenger service, the Rio Grande Zephyr, between Salt Lake City and Denver using the original equipment until 1983. Since 1983 the California Zephyr name has been applied to the Amtrak service, which operates daily and is a hybrid of the route of the original Zephyr and its former rival, the City of San Francisco. 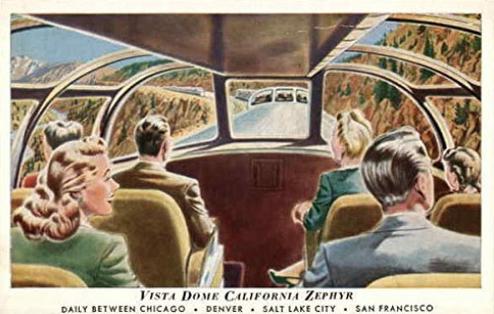 A postcard depiction of a Vista Dome car interior on the California Zephyr.