The route of the Capitol Limited. 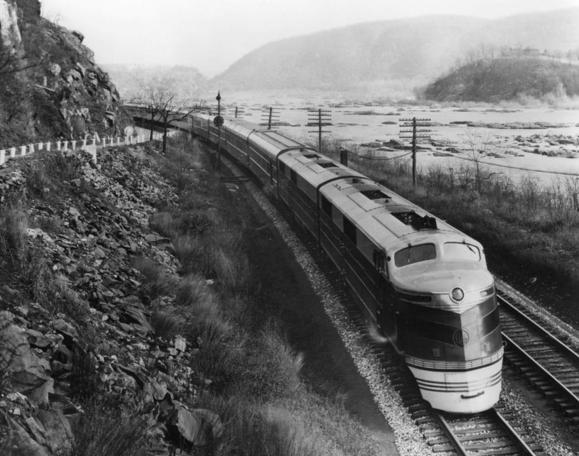 "The Capitol Limited", one of the Baltimore and Ohio Railroad's classic trains in the Potomac River valley. This train provided excellent facilities and cuisine between Chicago and Washington D.C.    ["The Capitol Limited" in Potomac River valley], Photograph, ca. 1952; (http://texashistory.unt.edu/ark:/67531/metapth28690/ : accessed September 20, 2015), University of North Texas Libraries, The Portal to Texas History, http://texashistory.unt.edu; crediting Museum of the American Railroad, Dallas, Texas. 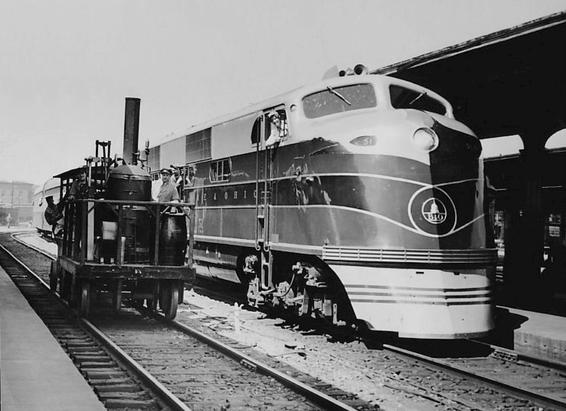 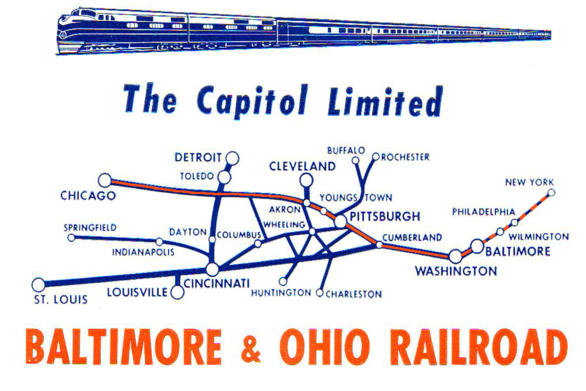 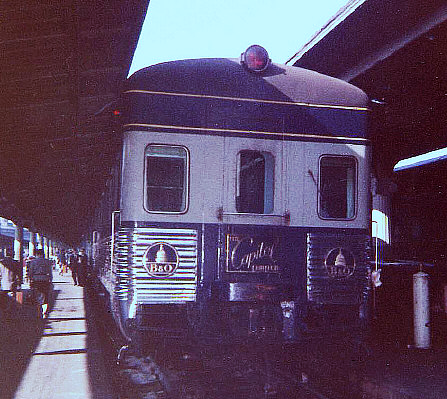 Photo of the Baltimore & Ohio's new EMD EA diesel locomotive for the Capitol Limited and the railroad's replica of their noted early steam engine, Tom Thumb. May 25, 1937.  B&O Publicity Photo 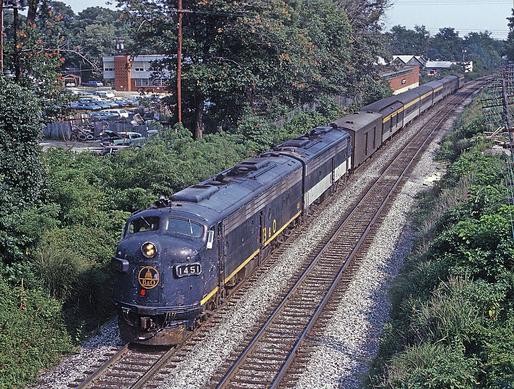 The Capitol Limited was an American passenger train run by the Baltimore and Ohio Railroad, originally between New York City and Grand Central Station in Chicago, Illinois via Union Station, Washington, D. C. and Pittsburgh. For almost 48 years, it was the B&O's flagship passenger train, noted for personalized service and innovation. At the time of its discontinuation on May 1, 1971, when Amtrak took over most rail passenger service in the U.S., the Capitol Limited operated between Washington and Chicago.

In 1938, the B&O dieselized the train after purchasing two sets of the new EA and EB locomotives from General Motors' Electro Motive Corporation. The B&O was heavily in debt during the Depression and could not afford to buy new equipment, so it rebuilt its old heavyweight passenger cars into streamlined ones when the diesels were introduced in 1938, making the Capitol Limited the first dieselized streamlined train in the East. By September, 1940, the through sleeping cars operating to New York were all streamlined. For the aesthetic features of the train the B&O turned to renowned industrial designer Otto Kuhler who turned the “Cap”, as it was affectionately known, into a regal operation complete with a stunning royal blue, silver, and gold pin-striping livery (a paint scheme that many feel is one of the all-time classics of the streamliner era).

By the early 1950s, the B&O had combined through cars for the Capitol Limited, the Columbian (No. 25), and the Ambassador (No. 19) into one train between New York and Washington. Beyond Washington, the three trains then operated separately, with several additional Washington–Chicago Pullman sleeping cars added to the Capitol Limited, along with a twin-unit dining car, two Strata-Dome dome cars, club car, and a flat-end observation car.

The B&O re-equipped the Capitol Limited with new, streamlined sleeping cars in 1950 and 1954, including the new duplex-roomette type. The Pullmans were named after rivers and lakes along the train's route, such as "Cacapon" and "Wawasee". Dome cars "Moonlight Dome" and "Starlight Dome", having sleeping compartments on their lower levels, were added on January 8, 1951. A twin-unit dining car seating 64 passengers at a time was obtained from the New York Central in 1957.

The Capitol Limited, in common with most name trains in the U.S. by the mid-1950s, suffered steadily declining patronage as the traveling public abandoned trains in favor of airplanes and the automobile. The B&O gave up on competing with the Pennsylvania Railroad into New York, discontinuing all passenger service north of Baltimore on April 26, 1958. Thereafter, the Capitol Limited operated between Washington and Chicago as a through train, with a few cars originating in Baltimore until 1966. Other B&O passenger trains were combined with the Capitol Limited: the Ambassador to Detroit and the formerly all-coach Columbian to Chicago. The combined train in the early 1960s had as many as 22 cars pulled by five locomotives.

To stem the loss of passengers and resulting deficits, the B&O in the early 1960s offered reduced mid-week fares, auto shipment for passengers (similar in concept to the Auto Train), and on-board movies, to attract more passengers. The train was marginally profitable, when mail and express revenue was included.

The loss in 1967 of mail and express contracts, which by then accounted for almost 70 percent of total passenger train revenue for the B&O, severely affected the B&O's passenger service. The Post Office Department's cancellation of its mail contract for the Capitol Limited and other trains on October 28, 1967, was the death knell. Many passenger trains were dropped and the consist of the Capitol Limited was considerably reduced. B&O discontinued all long-distance train service to Baltimore's Camden Station. Between October, 1966, and April, 1971, a connecting RDC operated between Baltimore and Washington, D.C., as train No. 105. By June, 1969, two E diesel electric engines pulled a train of: 1 baggage, 1 sleeper (10/6), 1 diner / lounge, 1 dome coach, and four coaches.

With the advent of Amtrak on May 1, 1971, the Capitol Limited was discontinued by the B&O, along with all of its other passenger trains (except for local commuter services). For the final run of the old Capitol Limited on April 29, 1971, the B&O ran the entire trainset from Baltimore's Camden Station, including the dome car. The B&O printed special commemorative tickets and returned its bottled Deer Park spring water and B&O's signature, "all-you-can-eat" giant salad bowls to the final run's dining car, some of the Capitol Limited 's amenities from more prosperous times. A 31-year veteran dining car waiter on the last run of the Capitol Limited recalled to a Baltimore Sun reporter that, "all the vegetables we served were freshly cooked on board—no frozen or canned food at all."

At its inception, Amtrak did not continue any of the B&O's former passenger train routes, and the Capitol Limited ended its 48-year run on the B&O. After a lapse of ten years, Amtrak revived Washington–Chicago service using the same B&O tracks (now CSX Transportation) between Washington and Pittsburgh, Pennsylvania, for the Amtrak Capitol Limited.