Postcard depiction of the Eastbound and Westbound Champion.

The Atlantic Coast Line's Champion, circa 1941. 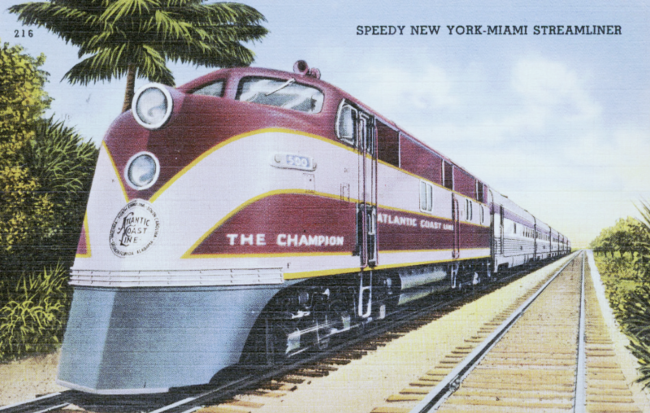 The Champion
The Champion was a streamlined passenger train operated by the Atlantic Coast Line Railroad and Florida East Coast Railway between New York City and Miami or St. Petersburg, Florida. It operated from 1939 until 1979, continuing under the Seaboard Coast Line and Amtrak. It was a direct competitor to the Seaboard Air Line Railway's Silver Meteor, the first New York-Florida streamliner.

History
Atlantic Coast Line
The Champion started as a daily service of the Atlantic Coast Line Railroad (ACL) in 1939, competing with the Silver Star and Silver Meteor of the Seaboard Air Line (SAL) on the New York–Florida route. Initially just a New York-Miami service, the ACL added a St. Petersburg train in 1941 once enough streamlined equipment was available. The two trains were called the Tamiami Champion (West Coast), which ran from New York to St. Petersburg and the Tampa Bay area, and the Tamiami Champion (East Coast), which ran from New York to Miami, Florida. In 1943 the names became East Coast Champion and West Coast Champion.

Southbound trains originated in New York's Pennsylvania Station, and traveled south over the Pennsylvania Railroad-owned Northeast Corridor through Philadelphia, Pennsylvania to Washington, D.C. There, a radio-equipped lounge car was added to the train. Leaving Washington, trains used the Richmond, Fredericksburg and Potomac Railroad to Richmond, Virginia, the north end of the ACL's main line. From Richmond, trains followed the Atlantic coast through Charleston, South Carolina and Savannah, Georgia to Jacksonville, Florida. Here the trains split, with the West Coast trains moving south then west through DeLand and Sanford on ACL rails to the Tampa Bay-St. Petersburg area, while East Coast trains turned south south-east to run along Florida's east coast to Miami via the Florida East Coast Railway.

In the pre-civil rights era, black passengers on the Champion and other trains running through the South were restricted to the "colored" coach, a combination baggage/coach behind the diesel. African-Americans ate behind a curtain at two designated tables next to the kitchen of the dining car, but were barred from the observation-tavern-lounge on the rear of the train. Segregation on trains serving the South persisted even though the Interstate Commerce Commission, U. S. courts, and President Harry S. Truman's 1948 mandate (banning segregation in railroad dining cars) had ordered interstate carriers to de-segregrate. Dining car stewards still refused to seat blacks and whites at the same table for many years afterwards.

In 1957 the West Coast Champion began hauling thru-cars for the City of Miami and South Wind streamliners to and from Chicago on its Jacksonville-Tampa/Sarasota leg via Orlando and its Jacksonville-St. Petersburg section via Gainesville and Ocala. During its long successful career the Champion network reached virtually every major city and resort in the Sunshine State except Florida Panhandle cities like Pensacola and Tallahassee, which were served by Seaboard's Jacksonville-New Orleans overnight Gulf Wind. The East Coast Champion ran up and down the Florida East Coast Railway stopping at popular east coast resorts while Gulf coast branch lines carried West Coast Champion thru-cars to Bradenton, Sarasota, Naples, Ft. Myers, and Venice.

From the outset, the Champion was an all-coach streamliner pulled by a diesel electric locomotive. Pullman sleeping cars were added a few years later. One Champion A-unit resides at the North Carolina Transportation Museum. 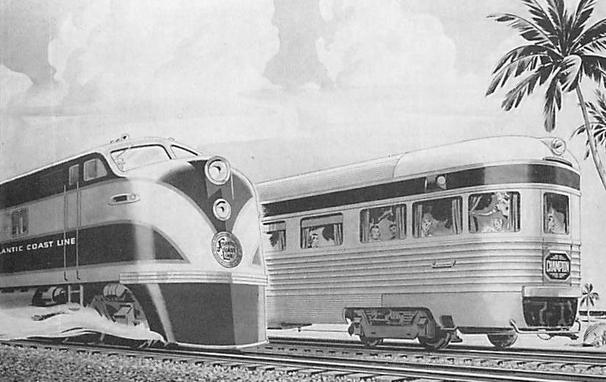 After the merger of the Atlantic Coast Line and Seaboard Air Line into the Seaboard Coast Line, the Champion remained as a New York–St. Petersburg service, numbered No. 91 southbound and No. 92 northbound.

Amtrak
When Amtrak assumed control of most of the passenger rail service in the United States in 1971, the Champion was retained as a New York–St. Petersburg service (No. 85/87) operating over the same line it had for the past thirty-two years. On several occasions throughout the 1970s Amtrak would combine the Champion with its old rival the Silver Meteor. The first of these instances came in the summer of 1972. The train was split in Savannah, Georgia, with the Champion section continuing to St. Petersburg and the renamed Meteor section passing west of Jacksonville via Thalmann, Georgia, and Callahan, Florida, on former Seaboard tracks to Miami. These combinations occurred again in 1975, 1976, and 1977, but with two changes; the split occurred at Jacksonville, and the Meteor again became the Silver Meteor. In 1979, budget cuts forced Amtrak to eliminate the Champion, which was consolidated with its old rival the Silver Meteor, this time for good.

The Budd Company delivered three identical equipment sets for the Champion; the ACL owned two and the FEC the third (the FEC received an additional matching set which became the Henry M. Flagler). Each equipment set consisted of a baggage-dormitory-coach, four coaches, a dining car, and a tavern-lounge-observation car. In 1940-1941 Budd delivered additional equipment that included three baggage-dorm-coaches, eight coaches, three dining cars, and three observation cars. The new equipment permitted the operation of an additional section between New York and St. Petersburg.

Throughout its 40 years of service (1939–79) the Champion was always a big money maker and remained a fast, reliable, full service operation until Amtrak took over in 1971. ACL, SAL and SCL had maintained exceptionally high standards on its popular Florida streamliners while other railroads gave up on passenger service.

According to former ACL/SCL/Amtrak train attendant James Longmire (now retired in Jacksonville, Florida), "The Champ was always packed and we didn't stop serving dinner until everyone got fed... no matter how long it took. We called the Champ "Big Bertha" because tips were so good we didn't have to cash our paychecks.