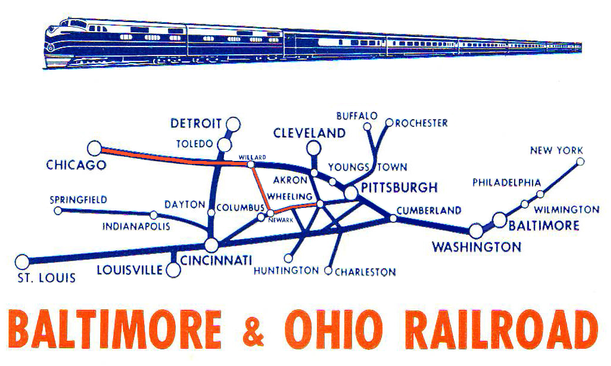 History
The Baltimore and Ohio Railroad was chartered in 1827 and grew to be one of the largest passenger railways in the United States, often by acquiring other, smaller railroads. B&O trains began operating between Wheeling and Chicago in 1880.

Decline and end of the train
By 1956, as railroad passenger traffic was declining nationwide, the Chicago Night Express operated as Train No. 245 from Wheeling only as far west as Willard, via Newark, Ohio. West of Willard, the sleeping car and coaches from train 245 were combined with Train No. 9, the Washington-Pittsburgh-Chicago Express, to Chicago. B&O finally discontinued the Chicago Night Express on December 1, 1956, which ended passenger rail service between Wheeling and Chicago.

In the 1940s, the westbound Chicago Night Express consisted of two or three head-ended cars, an RPO baggage car, a coach and a sleeper. Between Wheeling and Newark, Ohio there was a diner car. In 1947, the diner car was replaced with a diner-parlor car. The train was dieselized in 1956, the last year it operated. By then, the train had a single 8 section-4 double bedroom sleeping car, a diner-lounge, a combine car and coaches.