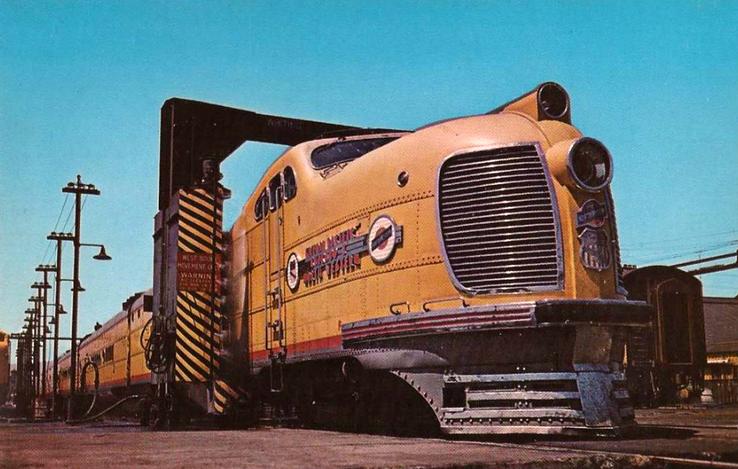 The Union Pacific-Chicago and Northwestern "City of Denver" at the North Western Chicago yards running through the train washer, ca. 1940s.

The City of Denver
The City of Denver was a streamlined passenger train operated by the Union Pacific Railroad between Chicago, Illinois and Denver, Colorado. It operated between 1936 and 1971. From 1936–1955 the Chicago and North Western Railway ("C&NW") handled the train east of Omaha, Nebraska; the Chicago, Milwaukee, St. Paul and Pacific Railroad (the "Milwaukee Road") handled it thereafter. The train was the fastest long-distance train in the United States when it debuted in 1936, covering 1,048 miles in 16 hours. For almost its entire career its principal competitor was the Chicago, Burlington and Quincy Railroad's Denver Zephyr.

By the end of 1935 the Union Pacific already operated four articulated streamliners: the M-10000 (City of Salina), M-10001 (City of Portland), M-10002 (City of Los Angeles), and M-10004 (City of San Francisco). In December the Union Pacific and C&NW announced a new Chicago–Denver "highspeed" service, to be served by a pair of trainsets enabling daily service, the M-10005 and M-10006. The projected running time of 16 hours was a full nine hours faster than the best schedule at that time. The new trains had a maximum speed in excess of 100 miles per hour and would average 65.5 miles per hour over the 1,048-mile trip. This would make it the fastest scheduled long-distance train in the United States. The Union Pacific emphasized that the improved schedule would "save a business day."

At the same time the Burlington had ordered two streamlined 10-car trainsets of its own: the Denver Zephyr, built by the Budd Company and modeled on the pioneering Pioneer Zephyr. The City of Denver beat the Denver Zephyr into service, making its first run between Chicago and Denver on June 18, 1936. Not to be outdone, the Burlington deployed two of its existing trainsets, the original Zephyr and the Mark Twain Zephyr to the route. While as fast as the City of Denver, the three-car sets in no way compared to amenities the 12-car UP streamliners provided. The Burlington's new equipment would arrive in November. The two services operated on nearly-identical schedules. Fulfilling its early promise, the City of Denver traveled at an average speed of 66 miles per hour, the fastest of the UP's streamliners.

The competition between the two trains remained unchanged for nearly twenty years. Even as it upgraded and replaced its other streamliners, the UP kept the original trainsets on the route until 1953, finally introducing new lightweight equipment in 1953–1954. The Burlington followed suit, replacing the Denver Zephyr's equipment in 1956. With both trains sporting new equipment competition intensified. The Burlington included "Vista-Dome" dome cars on the Zephyr; within a year the Milwaukee Road's Super Domes began making appearances on the City of Denver. The Burlington also began operating a slumbercoach, an innovative economy sleeping car. Having none of its own, the UP leased two all-roomette Pennsylvania Railroad sleeping cars and billed it as "Slumbercoach service." Nevertheless, in the words of railroad historian Joe Welsh the Denver Zephyr "made mincemeat of the UP's City of Denver. Another noteworthy change had occurred on October 30, 1955, when the Milwaukee Road began handling the UP's streamliners east of Omaha, replacing the C&NW.

Throughout the late 1950s and 1960s the UP gradually downgraded its passenger services and consolidated trains as losses mounted. The westbound City of Denver and City of Portland began joint operation in 1959. On September 7, 1969, the UP combined five of its Chicago–West Coast streamliners into a single massive train dubbed by critics the "City of Everywhere." This train included the City of Denver, City of Kansas City, City of Los Angeles, City of Portland, and City of San Francisco. Amtrak preferred the Burlington's route between Chicago and Denver, the City of Denver made its last run on April 30, 1971.

Route
Between 1936–1955 the City of Denver used the Chicago and North Western Railway between Chicago and Omaha. After 1955 it used the Milwaukee Road. The train's Union Pacific route west of Omaha remained unchanged for the duration. The train followed the Overland Route from Omaha to Julesburg, where it diverged southwest for Denver. In March 1950 it made the following stops west of Omaha: Columbus, Grand Island, Kearney, and North Platte in Nebraska and Julesburg in Colorado. On the C&NW it made the following stops west of Chicago, all in Iowa: Cedar Rapids, Ames, Boone, and Council Bluffs. The westbound train departed Chicago's Chicago and North Western Terminal at 5:00 PM and arrived at Denver's Union Station at 8:30 AM the following morning.

With the switch to the Milwaukee Road the train's Chicago terminus shifted to Union Station. In June 1960 the City of Denver stopped in Davis Junction (for Rockford) and Savanna in Illinois, Marion (for Cedar Rapids) and Perry in Iowa. West of Omaha the station stops were unchanged. The new routing forced new timing; the westbound City of Denver departed Chicago at 3:45 PM and arrived in Denver at 7:35 AM the following morning. By an odd coincidence new route was exactly as long as the previous one: 1,048 miles.

Equipment
Pullman-Standard and the Electro-Motive Corporation collaborated on the M-10005 and M-10006 streamlined trainsets which served as the City of Denver's original equipment. Each set contained a two-car power set, which each unit developing 1,200 horsepower. Behind the power car was a baggage car with auxiliary power, a baggage-tavern car (containing the famed "Frontier Shack"), two 50-seat coaches, a dining-cocktail lounge, three sleeping cars in varying configurations, and a sleeper-lounge-observation car.

The 50-seat coaches featured 2x2 seating, with baggage racks in the vestibule end and separate men's and women's restrooms in the other. The dining-cocktail lounge had half its space devoted to a kitchen/bar area; two seating areas in the other end seated 12 and 24, respectively. Two of the sleeping cars contained 12 open sections, with daytime seating for 24; the third contained eight enclosed sections, two double bedrooms, and a compartment, giving the car a maximum occupancy of 22. The sleeper-lounge-observation car included a compartment and five more double bedrooms. The rear observation area seated 22. The cars were air-conditioned throughout.

The two trainsets remained in use until March 19, 1953, when the Union Pacific introduced conventional lightweight equipment. The UP finalized the consist on January 10, 1954. Each of the two new consists included the following: baggage car, coach-lounge (the "Pub", replacing the "Frontier Shack"), two 44-seat coaches, twin-unit dining car, four sleeping cars, and a buffet-lounge. The cars were drawn from both the Union Pacific and the Chicago and North Western. The sleeping cars included two 10-roomette 6-double bedroom Pacific-series cars, a 12-section car, and a 4-compartment 4-double bedroom 1-compartment car. For a brief period in the late 1950s two leased Pennsylvania Railroad 21-roomette sleeping cars operated on the City of Denver to complete with the slumbercoaches on the Denver Zephyr. After the discontinuance of the Olympian Hiawatha in 1961 the Milwaukee Road's Super Dome dome lounges could be found on the City of Denver as well.