The City of Las Vegas
The "City of Las Vegas" was a streamlined passenger train operated by the Union Pacific Railroad between Las Vegas, Nevada and Los Angeles, California. It operated from 1956 to 1968. It was one of several trains to operate with the experimental General Motors Aerotrain, although this experiment was short-lived. After the 1961 the train was known as the Las Vegas Holiday Special.

History
The Union Pacific introduced the "City of Las Vegas" on December 18, 1956. The service initially used General Motors' experimental Aerotrain trainset, but the Union Pacific ended their lease within a year due to maintenance and performance problems including needing a helper engine to climb Cajon Pass. The train continued with standard streamlined cars in UP's Armour Yellow paint, leaving Los Angeles in the morning and returning in the evening.

On September 24, 1961 the name was changed to "Las Vegas Holiday Special", when the consist and frequency were reduced. Service ended altogether on June 15, 1968.

The City of Las Vegas at Cajon Pass. 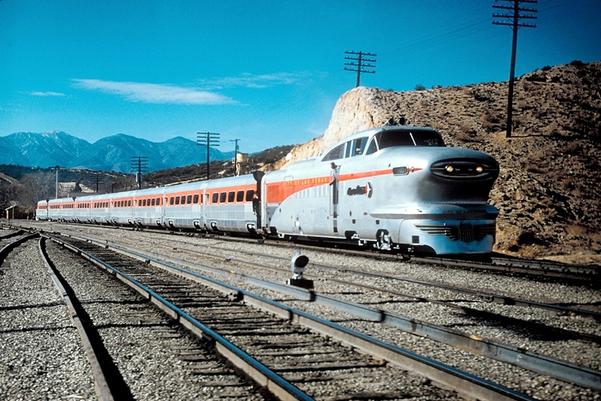 The GM Aerotrain included nine cars: three 40-seat coaches, a bar-lounge, a "Chuck Wagon" buffet, three more 40-seat coaches, a 36-seat coach. The Union Pacific replaced the Aerotrain with conventional equipment on September 15, 1957. The new eight-car consist included a mail car, two 48-seat coaches, a lunch counter-dinette, a "Pub" buffet-lounge, and three more 48-seat coaches. These cars were drawn from a variety of sources. The coaches were built by Pullman-Standard in 1942 for the San Francisco Overland Limited. The lunch-counter dinette was part of a set four (4000-4003) built by American Car and Foundry for the City of St. Louis in 1951. The dinette portion seated 16 while the counter area seated 21 along a 42-foot-long counter top. The "Pub" was originally coach No. 5201, part of a set of twelve (5200-5211) built by Pullman-Standard for the Challenger in 1937.