The Union Pacific's City of Los Angeles and the ATSF's San Diegan at Union Station in Los Angeles in March, 1971. 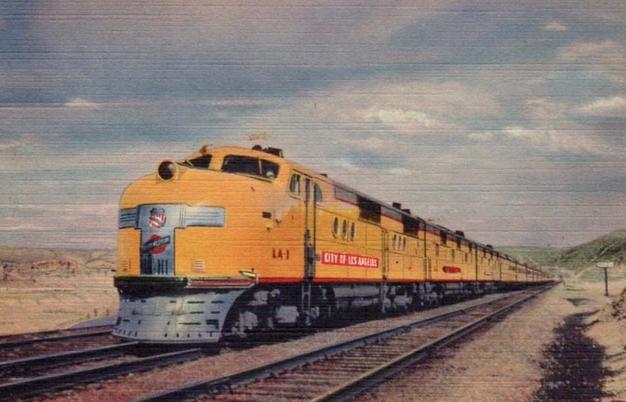 Other railroad uses of the name City of Los Angeles
The City of Los Angeles name has also been applied to a 48-seat diner built by the St. Louis Car Company in 1949. The car was originally UP No. 4808 and is currently owned and operated by the Union Pacific as part of their excursion fleet. 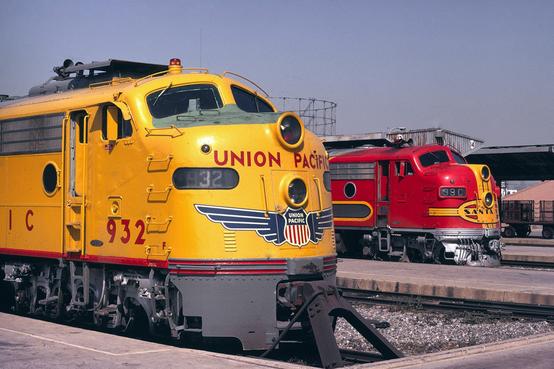 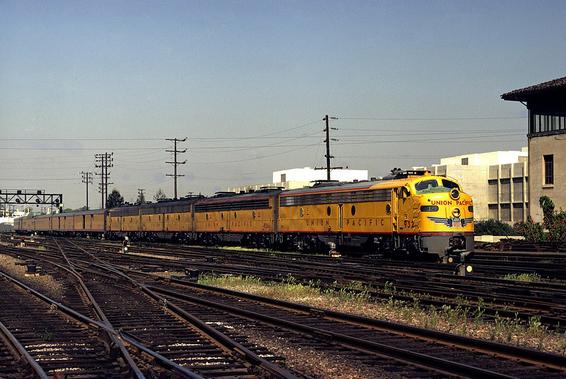 This train was the top-of-the-line for UP, which marketed it as a competitor to the Super Chief, a streamlined passenger train on the Atchison, Topeka and Santa Fe Railway, and the Golden State, a streamlined passenger train jointly operated by the Rock Island and Southern Pacific railroads. As with the City of Los Angeles, many of the train's cars bore the names of locales in and around its namesake city.

CNW / UP used one of two three-unit sets of EMC E2 locomotives as motive power beginning in 1937. The UP scored a public relations coup in the mid-1950s when the City of Los Angeles was featured in two episodes of the popular television series I Love Lucy. In 1955 the Milwaukee Road assumed the service, replacing the Chicago and North Western between Chicago and Omaha. Actor Ronald Reagan often traveled on this train and even did a full page print ad for it that appeared in the National Geographic magazine. In a cost-cutting move, the City of Los Angeles was combined with the City of San Francisco in 1960.

In 1979 Amtrak created the Desert Wind, running mostly on the City of LA route from Los Angeles to Ogden, Utah where it connected to the Oakland-Chicago train. (After a year or two some of its cars ran through to Chicago.) The Desert Wind ceased operation in 1997.