A City of Portland Slide Show. 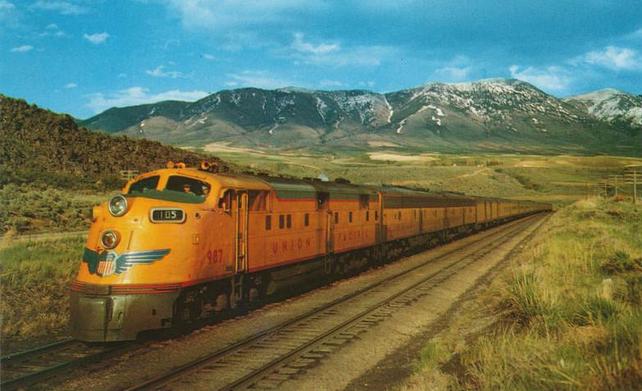 The City of Portland
The City of Portland was a named passenger train operated by the Union Pacific Railroad and Chicago and North Western Railway between Chicago, Illinois, and Portland, Oregon. It started in June 1935, using the refurbished M-10001 streamliner trainset; with only one set of equipment the train left each of its terminals five times a month (or six, for the first few months).

It was the first streamliner with sleeping cars and the first streamliner running from Chicago to the Pacific coast; its 39 hour 45 minute schedule became the standard. (In April 1935 the fastest train took 59 hr 20 min Chicago to Portland.) The M-10001 was withdrawn in 1939 and replaced with another articulated trainset (but still just one). The train was the first of the 40-hour Coast streamliners to run daily, in February 1947. In 1955 the Milwaukee Road replaced the Chicago and North Western between Chicago and Omaha; from January 1959 until 1967 the train ran via Denver. The train was discontinued May 1, 1971, with the start of Amtrak. The route roughly follows the trail of the defunct Amtrak route, the Pioneer.

In addition to baggage, coach, and sleeping cars, about 1955 the City of Portland added an Astra Dome dome coach, dome observation lounge and dome dining car to each consist. The dome dining cars were unique to Union Pacific and were only operated on this train and the City of Los Angeles.