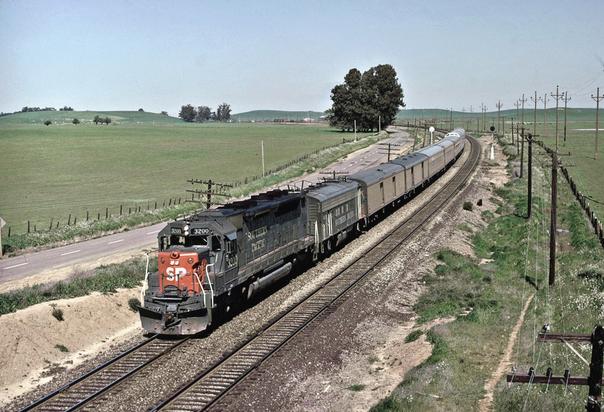 On 13 January 1952 the Southern Pacific Railroad "City of San francisco" luxury passenger train was stranded at Donner Pass. After being marooned for days, 222 people were rescued from the snowbound streamlined train high in the blizzard swept California Sierras. 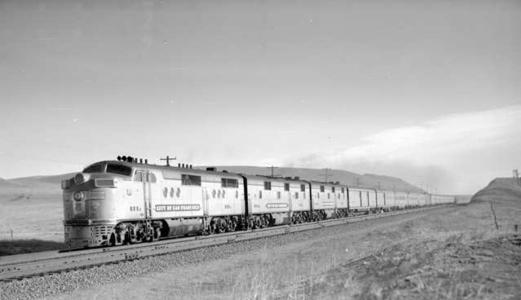 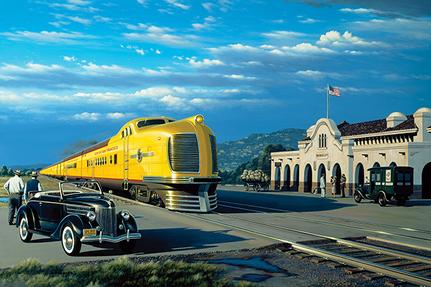 According to Robert Wayner in "Car Names, Numbers, and Consists" (1972): "The first new postwar lightweight cars for Overland Route service were not delivered until 1949. However, the participating railroads were obliged to place the CITY OF PORTLAND, CITY OF LOS ANGELES and CITY OF SAN FRANCISCO in daily operation in February, May and September of 1947 respectively to meet the competition of such trains as the GOLDEN STATE and the OLYMPIAN HIAWATHA. The creation of eight additional consists meant the commandeering of a great number of lightweight cars from the CHALLENGER, SAN FRANCISCO OVERLAND LIMITED and other trains, plus the requisitioning of a few heavyweight cars where needed. All such equipment was then painted yellow-and-gray and in some instances lettered above window level for the train in which a given car would be running. The luxury of an extra set of cars to permit a leisurely turnaround at the end of the run was out of the question; daily service was established and maintained between Chicago and each Pacific Coast terminal with only four consists, permitting but a half-day at each end for all necessary cleaning, provisioning and maintenance. If bad weather in the high Sierra delayed the CITY OF SAN FRANCISCO'S arrival in Oakland or Chicago by more than a few hours, a mostly-heavyweight train had to be hastily assembled and dispatched that evening as the CITY OF SAN FRANCISCO starting in the opposite direction." 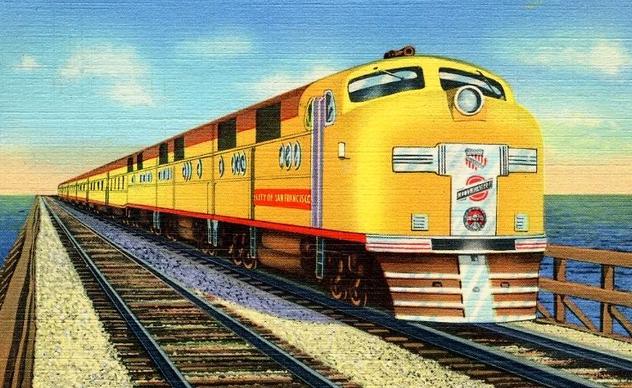 At 9:33 on the evening of August 12, 1939, the westbound City of San Francisco (Train 101) derailed while crossing bridge No. 4 in Nevada's Humboldt River canyon 40 miles west of Elko between the towns of Harney and Palisade killing 24 and injuring 121. The wreck appeared to have been caused by sabotage, but despite a major manhunt, offers of reward, and years of investigation by SP, the case remains unsolved.

Competing streamlined passenger trains were, starting in 1949, the California Zephyr on the Western Pacific, Denver and Rio Grande Western, and Chicago, Burlington and Quincy Railroads, and starting in 1954, the San Francisco Chief on the Atchison, Topeka and Santa Fe Railway. As with the City of Los Angeles, many of the train's cars bore the names of locales around its namesake city, including Mission Dolores, the nickname given to San Francisco's Mission San Francisco de Asísi.

The City of San Francisco is remembered for the blizzard in the Sierra Nevada that trapped the train for six days in January 1952 at 17 miles west of Donner Pass at Yuba Pass on Track No. 1 adjacent to Tunnel 35 (on Track No. 2), at about MP 176.5. Snowdrifts from 100 mph winds blocked the train burying it in 12 feet of snow and stranding it from January 13 to 19. The event made international headlines. In the effort to reach the train, the railroad's snow-clearing equipment and snow-blowing rotary plows became frozen to the tracks near Emigrant Gap. Hundreds of workers and volunteers, including Georg Gärtner, using snowplows, tractors and manpower came to the rescue by clearing nearby Highway 40 to reach the train. The 196 passengers and 20 crew members were evacuated within 72 hours, on foot to vehicles that carried them the few highway miles to Nyack Lodge. The train itself was extricated three days later on January 19.

In October 1955 the Milwaukee Road replaced the Chicago and North Western between Chicago and Omaha; in 1960 the City of San Francisco was combined with the City of Los Angeles east of Ogden. 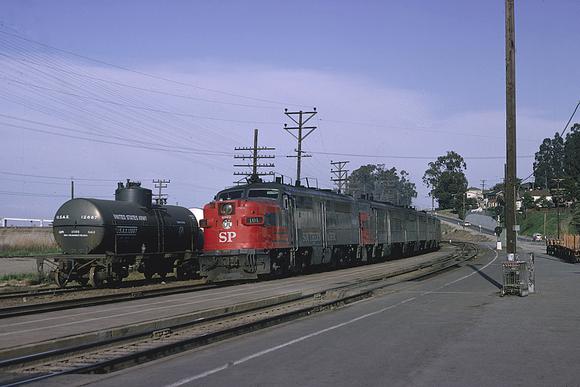 June 14, 1936: The City of San Francisco (Trains Nos. 101-102) made its inaugural run between Chicago and Oakland/San Francisco as streamline through service. It operated with a dedicated Pullman-built 11-car articulated lightweight streamline consist made up of a set of two 1,200 h.p. diesel-electric power unit cars (M-10004A/B), a baggage-mail car, a baggage-dormatory-kitchen car, a diner-lounge car, four named sleeper cars, a 48-seat chair car, and a 38-seat coach-buffet-blind end observation car.

While costing over $2,000,000 to build, operating costs (fuel, crew, etc) for the train were less than two cents per passenger-mile. The extra fare on the City over the full run was $15 for open section Pullman accommodations, $5 in the chair car, and $22.50 for a roomette. After both the original and new train sets made a joint run from Oakland to Chicago on the that date, the older 11-car consist was shopped for a seven-month rebuild and then used variously over the next decade as the City of Los Angeles, City of Denver, and City of Portland before being withdrawn from service in the spring of 1948 and eventually scrapped.

The new and subsequent City of San Francisco train sets were jointly owned by the C&NW, UP and SP with the exception of the sleepers which were Pullman-owned until 1945 when two of those cars were acquired by the C&NW and a dozen by the UP. The new train was capable of speeds up to 110 miles an hour and accommodated 222 passengers. Sleeping car space was double that of conventional trains with 168 berths compared to 84 while chair car space was increased to 54. The new City consist had 60 compartments, drawing rooms, bedrooms, and "roomettes" instead of the regular nine for a larger variety of sleeping accommodations to choose from than on any train in America. Among the premium services provided on the train were stewardess-nurses, a barber shop, a shower bath, and an internal telephone system. All regularly assigned cars were also air-conditioned. Frequency remained at five trips per month each way.

July 26, 1941: A second set of equipment entered service allowing departures ten times per month each way. The added service replaced the short-lived steam powered Pullman-built mostly heavyweight (steel) streamline Forty-Niner that had operated an almost ten-hour slower 49-hour run five times a month between Chicago and San Francisco from July 8, 1937 to July 27, 1941. Under an order of the War Production Board, no new head-end or passenger cars of any type (other than "military sleepers") were built and delivered to US railroads from mid 1942 until late 1945.

1942-46: The lounge-observation car NOB HILL and lounge-buffet car MARINA were removed from the consists of the City of San Francisco's two train sets and placed in storage during WWII in compliance with a General Order of the Office of Defense Transportation (ODT) banning the carriage of strictly luxury cars without passenger revenue capacity. Those cars were replaced with sleepers.

October 1, 1946: Service was increased to thrice weekly departures from both Chicago and San Francisco made every Tuesday, Thursday and Saturday evening.

September 1, 1947: The City became daily with the creation of additional train sets to support seven-day-a-week operation in both directions of its 39-and-a-half-hour service thus finally relegating the long-standing (since 1887) Overland to a secondary, no longer "Limited" train in providing daily service between Chicago and Oakland/San Francisco on the Overland Route. A fifth consist made possible by the deliveries of new post war cars was added to the City of San Francisco in 1950.

January 13, 1952: The westbound City of San Francisco was caught in a blizzard in the Sierras at Yuba Pass where the train set remained stranded until January 19. The incident was one inspiration for Railway series book, The Twin Engines.

October 30, 1955: The Chicago, Milwaukee, St. Paul and Pacific Railroad (The Milwaukee Road) replaced the Chicago and North Western between Chicago and Omaha.

July 16, 1962: The SP's San Francisco Overland (Trains 27-28) ended its long run as a separate San Francisco/Oakland to Ogden year-round daily train when that service was consolidated with the City of San Francisco except for occasional summer and holiday seasonal extra section runs of the Overland which service ended on January 2, 1964.

Other railroad uses of the name City of San Francisco:
The City of San Francisco name has been applied to a 10/6 sleeping car built by Pullman Standard in the early 1950's. The car is now owned by the Boone and Scenic Valley Railroad and operates on the line's dinner and first class trains. Union Pacific itself has a dome lounge car used on excursion and executive trains which carries the "City of San Francisco" name.