The original 1946 version of the train required three consists to protect its schedule. The consists contained a mix of heavyweight and lightweight equipment:

A City of St. Louis Slideshow. 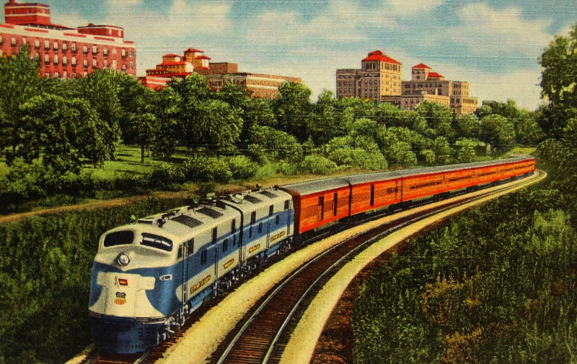 Postcard depiction of the Wabash train City of St. Louis headed by a Wabash diesel. The Union Pacific shield and the Wabash flag are seen on the locomotive's nose. The train was built by American Car and Foundry.

History
The City of St. Louis began operating on June 2, 1946 between St. Louis, Missouri and Cheyenne, Wyoming, where its cars were switched to other Union Pacific trains to continue west to the Pacific coast. In April 1951 it became a separate train from St. Louis to Los Angeles, California, skipping Cheyenne; it still carried some cars to switch to trains to other coast cities. In 1964 it was combined with the City of Los Angeles west of Ogden, Utah, and in 1968 with the City of San Francisco from Cheyenne to Ogden.

Between St. Louis and Kansas City the train ran on the Wabash Railroad, then on the Norfolk & Western which leased the Wabash in 1964. This part of the run became a separate train on June 19, 1968, retaining the City of St Louis name until its discontinuance in April 1969; after June 1968 the Union Pacific train was the City of Kansas City, which lasted until Amtrak took over on May 1, 1971.