GS-4 No. 4449, the only surviving streamlined steam locomotive used in Daylight Service, coming out of snowshed 10.7 on Marias Pass.  Photo by Drew Jacksich.

The Coast Daylight
The Coast Daylight, originally known as the Daylight Limited, was a passenger train on the Southern Pacific Railroad (SP) between Los Angeles and San Francisco, California, via SP's Coast Line. In the eyes of many the "most beautiful passenger train in the world," it carried a stunning red, orange, and black color scheme. The train operated from 1937 until 1974, one of the few passenger trains retained by Amtrak in 1971. Amtrak merged it with the Coast Starlight in 1974. 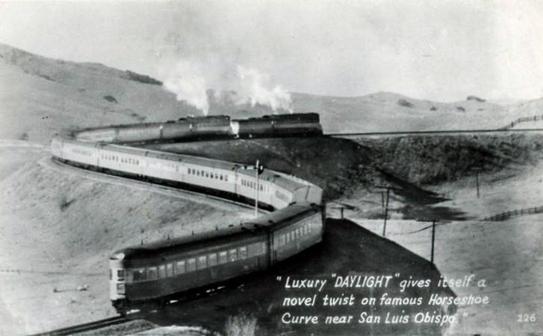 History
Southern Pacific
The Southern Pacific introduced the Daylight Limited on April 28, 1922. The train operated on a 13-hour schedule between the Third and Townsend Depot in San Francisco and Central Station in Los Angeles, running on Fridays and Saturdays only. In 1922 and 1923 the train ran seasonally, beginning in April and ending in November. Daily operation began in July, 1923. The SP shortened the running time to 12 hours for the 1924 season. Until the late 1920s it made no intermediate stops (except for servicing), the longest nonstop run in the world at that time. Its 12-hour schedule was two hours better than any other train on its route.

The streamlined Daylight began on March 21, 1937, pulled by GS-2 steam locomotives on a 9 3⁄4-hour schedule. It was the first of the Daylight series that later included the San Joaquin Daylight, Shasta Daylight, Sacramento Daylight, and Sunbeam. By 30 June 1939 the streamlined Daylights had carried 268.6 million passenger-miles on 781,141 train-miles for an average occupancy of 344 passengers. The Coast Daylight ran behind steam until January 7, 1955, long after most streamliners had been powered by diesel.

A second train, the Noon Daylight, ran the same route 1940-42 and 1946-49 with a suspension during World War II. The original Coast Daylight became the Morning Daylight during this time. In 1949 the Noon Daylight was replaced by the overnight Starlight using the same equipment. In 1956 coaches from the Starlight were added to the all-Pullman Lark and the Starlight was discontinued in 1957. Amtrak later revived the name for its Los Angeles to Seattle service known as the Coast Starlight.

A 1966 study by the Stanford Research Institute found that it cost the Southern Pacific $18.41 to transport a passenger on the Coast Daylight between Los Angeles and San Francisco, roughly twice that of air or bus service. Reasons given included the labor-intensiveness of rail service, and the fact that a single consist could make only one trip per day.

The Coast Daylight was one of the trains retained by Amtrak when it commenced operation of most intercity passenger trains in the United States on May 1, 1971. It changed the northern terminus from San Francisco to Oakland, ending intercity service to San Francisco; passengers now had to connect to Southern Pacific's Peninsula Commute. The train ran quad-weekly. The other three days of the week an extended Cascade, soon to be renamed the Coast Starlight, operated between San Diego and Seattle via Oakland. Amtrak marketed this dual operation as Coast Daylight-Starlight. On November 14, 1971, Amtrak extended the Coast Daylight‍ '​s southern terminus from Los Angeles to San Diego. The Los Angeles–San Diego through-running ended the following April, replaced by a third San Diegan. In June 1973 Amtrak began running the combined Coast Daylight-Starlight daily. Positive response led to Amtrak to retain this service, and the Coast Daylight name was dropped on May 19, 1974.

Amtrak has worked on plans for resuming Coast Daylight service from San Francisco to Los Angeles since the late 1990s. It may be merged with the existing Pacific Surfliner route, thus extending the line to San Diego. More specific plans have been made in the last few years. The latest review of the possibility of service restoration as made on August 14, 2014, the San Luis Obispo Council of Governments (SLOCOG) organized and hosted a meeting between the Los Angeles – San Diego – San Luis Obispo (LOSSAN) Rail Corridor Agency and the Coast Rail Coordinating Council (CRCC), where substantial progress was made toward identifying which specific policy initiatives would be given priority so that restoration of the Coast Daylight service might be effectuated before the end of the decade.

Legacy
On August 26, 1999 the United States Postal Service issued 33¢ All Aboard! 20th Century American Trains commemorative stamps showing five celebrated American passenger trains from the 1930s and 1940s. One of the stamps showed a GS-4 steam locomotive pulling the red-and-orange train along the coast.

The train is the subject of the documentary, Daylight: The Most Beautiful Train in the World hosted by Michael Gross. The documentary shows early color images and color films from within the train and as it travels along its route. Passengers reminisce about their travels, about the coastal scenery, and about the amenities. The narrative is accompanied by collection of contemporaneous photographs and films, including personal black-and-white films showing life aboard the train.

The documentary covers 1937 to 1971, the period when the trains were run by the Southern Pacific. It begins with the train being ordered in 1935 in spite of the depression, entering service in 1937, operating through World War II, replacing steam locomotives with diesel power in the 1950s, and finally the demise of the train. After World War II declining revenues forced SP to cut costs.

One change was the elimination of the dining cars in the 1960s, replaced by Automat cars that offered food from vending machines instead of made-to-order meals in the dining cars, cutting the cost of the train's dining crew. This continued until 1971 when Amtrak took over and extended the route north to Portland and Seattle. 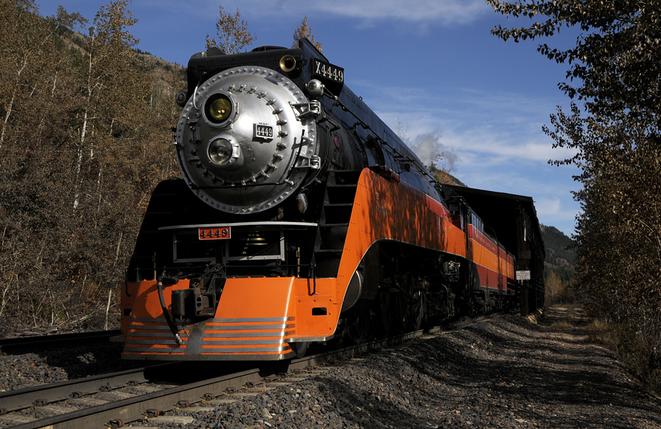 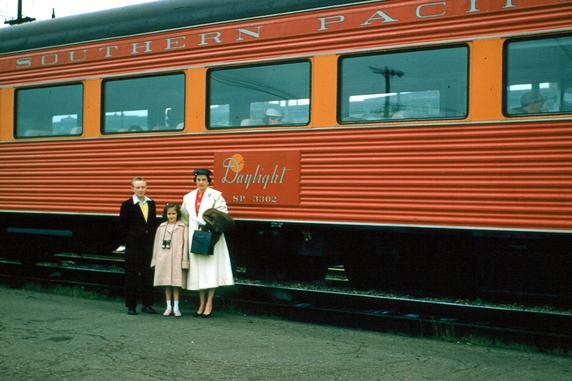 Postcard photo of the Southern Pacific Railroad's "Daylight" on Horseshoe Curve, circa 1938.