Check out "Amtrak Across America: An Illustrated History" by John A. Fostik, MBA. Click image for details.

Equipment
The train uses double-decker Superliner I & II equipment, including a Sightseer Lounge car that has floor-to-ceiling windows to enjoy the passing scenery.

The Coast Starlight is unique in the Amtrak system, as it includes a first-class lounge car called the "Pacific Parlour Car". The cars are Budd Hi-Level Sky Lounge cars, built in 1956 for the Santa Fe's El Capitan service. Called a "living room on rails", the Parlour car offers several amenities to first-class sleeping car passengers including wireless Internet access, a full bar, a small library with books and games, an afternoon wine tasting, and a movie theater on the lower level.

Baggage is placed in one of Amtrak's Heritage single-level baggage cars or in designated coach-class cars.

EMD F59PHI locomotives used in corridor services are often spotted on the Coast Starlight as they are ferried from either the Northwest or Northern California down to Amtrak's shops in Los Angeles where equipment required for major locomotive servicing is available.

Until April 25, 1982 the Coast Starlight used Southern Pacific Railroad's "West Valley Line" between Tehama and Davis, California with a stop in Orland, bypassing Sacramento. It was rerouted to the line between Tehama and Roseville, east of Sacramento, via Chico. In southern California it had a stop in Glendale, later replaced by the current stop in Van Nuys which, unlike Glendale, has Amtrak staff for checking baggage. (Glendale had an Amtrak ticketing office until Amtrak discontinued the Coast Starlight‍ '​s stop there.) During Season 9 of Reading Rainbow in 1991, the Coast Starlight was used as several segments in the episode "Kate Shelley and the Midnight Express". One of the segments included the host; Levar Burton riding the Coast Starlight for fun where in addition to showcasing the books featured in this episode, introducing the viewers to an engineer and showing a history of trains, he also explored the train (a tour of several different cars like the observation car, dining car, coach car, etc.) while making his way to his bedroom in the sleeping car.

In recent years the train acquired the nickname "Coast Starlate" because of its abysmal on-time record despite having its southbound schedule between San Jose and Los Angeles lengthened by 2.25 hours and between Seattle and San Jose lengthened by 2 hours over its 1971 schedule. From October 2005 through August 2006 it arrived on time only 2% of the time, often running 5 to 11 hours behind schedule. This performance was likely a factor in the 26% drop in ridership between 1999 and 2005. Union Pacific Railroad (UP), which handles traffic on the route and local rail groups disputes the causes of the poor performance. Rail groups blame UP for giving priority to freight traffic, while UP cites ongoing track repairs, among other issues. Recently, UP has been giving Amtrak priority. According to Amtrak spokeswoman Vernae Graham, the Coast Starlight was on-schedule 86% of the time in May 2008. Between October 2009 and September 2010, it arrived on time at its final destination 91.2% of the time. In comparison, the Department of Transportation reports that national airlines ran on schedule 74% of the time from April 2007 to April 2008.

During early summer 2008, the Coast Starlight was relaunched with new amenities and refurbished equipment. In July 2008, the Pacific Parlour cars had been refurbished and were back in service as part of the relaunch. This was much anticipated, due to the success of Amtrak's "re-launches" of the Empire Builder. Between FY2008 and FY2009, ridership on the Coast Starlight jumped 15% from 353,657 passengers to 406,398 passengers.
In the January 2011 issue of Trains magazine, this route was listed as one of five to be looked at by Amtrak in FY  2012, like the Sunset Limited, Texas Eagle, California Zephyr, Capitol Limited, and Cardinal were examined in FY 2010. During fiscal year 2011, the Coast Starlight carried over 425,000 passengers, a decrease of 4% from FY2010. It had a total revenue of US$39,997,952 during FY2011, a 6.9% increase from FY2010.

The Coast Starlight is a passenger train operated by Amtrak on the West Coast of the United States. It runs 1,377 miles from King Street Station in Seattle, Washington, to Union Station in Los Angeles, California. The train's name was formed by merging of two Southern Pacific Railroad train names, the Coast Daylight and the Starlight, two of SP's numerous Coast Line trains. Major stops include Portland and Eugene, Oregon; and Sacramento, Emeryville (for San Francisco), Oakland, San Jose, San Luis Obispo, and Santa Barbara, California.

History
Before the formation of Amtrak, no one passenger train ran the length of the West Coast. The closest equivalent was SP's West Coast, which ran via the San Joaquin Valley from Los Angeles to Portland, with through cars to Seattle via the Great Northern Railway. The SP had the Coast Daylight between Los Angeles and San Francisco and the Cascade between Oakland and Portland. The SP also ran overnight trains between Los Angeles and San Francisco Bay area – the all-sleeping car Lark on the coast route and the mixed coach and Pullman Owl on the San Joaquin Valley line. Service from Portland north to Seattle was provided by the Union Pacific, Northern Pacific Railway or Great Northern Railway. In 1970 the Great Northern and the Northern Pacific were merged into the Burlington Northern Railroad, which continued to provide service. Trains south from Los Angeles to San Diego were the Santa Fe's San Diegans.

The Coast Starlight Train No. 11 at Emeryville, California, January 25, 2014.  Photo by Clay Gilliland. 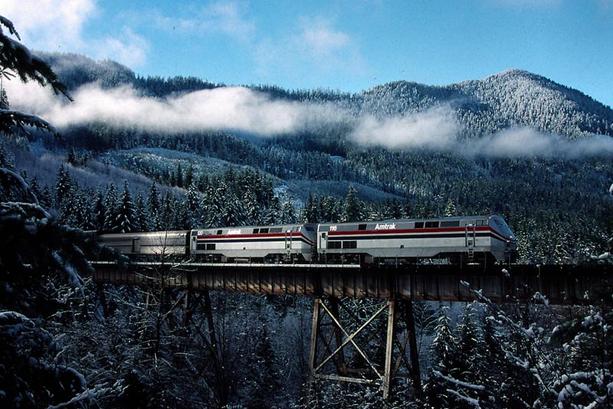 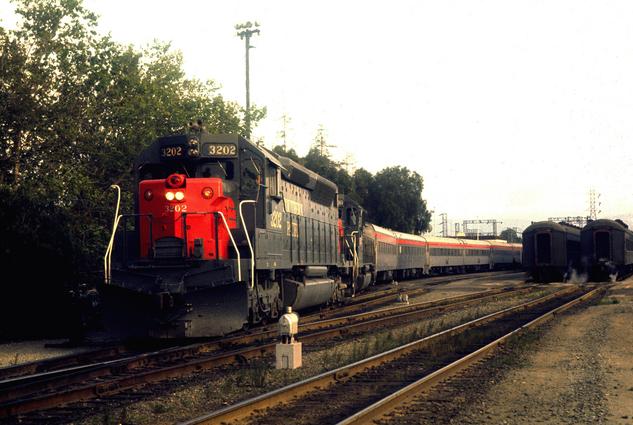 By Bruce Fingerhood from Springfield, Oregon, US - saltcreekUploaded by Mackensen, CC BY 2.0, https://commons.wikimedia.org/w/index.php?curid=30999424 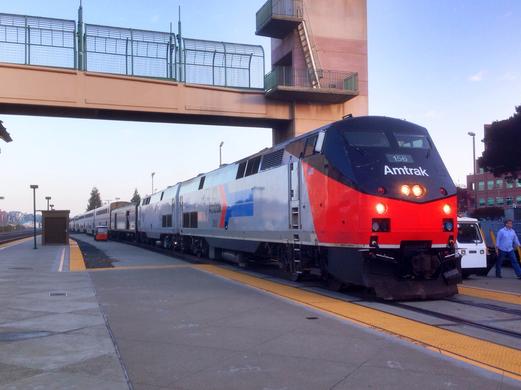 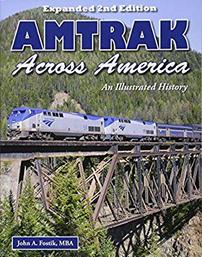 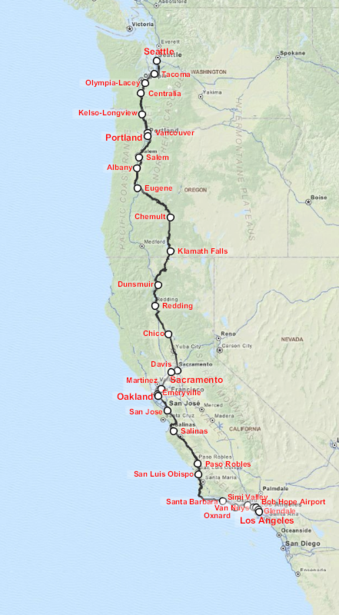 With the start of Amtrak operations on May 1, 1971 a single train began running between Seattle and San Diego. The unnamed train ran three days a week; on the other four days (northbound Monday, Wednesday, Thursday and Saturday; southbound Monday, Tuesday, Thursday and Saturday) another unnamed train ran between Oakland and Los Angeles (initially 98 northbound and 99 southbound). On November 14 Amtrak officially dubbed this dual operation as Coast Daylight-Starlight and extended the former Coast Daylight‍ '​s southern terminus from Los Angeles to San Diego. The Los Angeles–San Diego through-running ended with the June 11, 1972 timetable change, replaced by a third San Diegan. In June 1973 Amtrak began running the combined Coast Daylight-Starlight daily. Positive response led to Amtrak to retain this service, and the Coast Daylight name was dropped on May 19, 1974.

With the November 10, 1996 timetable change Amtrak added through coaches between Seattle and San Diego attached to the last Amtrak San Diegan train of the evening (No. 511). They were coupled onto the first morning train back to Los Angeles where they were re-coupled to the Coast Starlight to Seattle. This was discontinued with the October 26, 1997 timetable change because of train 11's poor timekeeping. Instead, if train 11 arrives at Los Angeles prior to the final Surfliner departure, through passengers to Orange County and San Diego will take the connecting Surfliner train, otherwise passengers will ride a bus (the motor coach option occurs more often than the train).