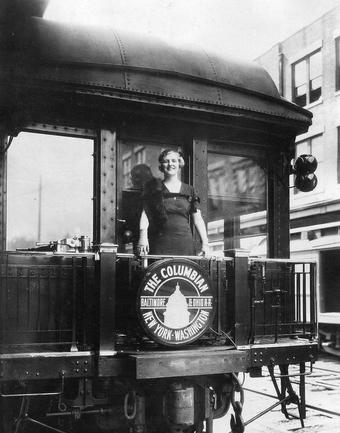 Route Map of The Columbian.

The Columbian
The Columbian was a named passenger train operated by the Baltimore and Ohio Railroad. It was the all-coach supplemental train of the all-Pullman Capitol Limited. It operated from 1931 to 1964. The train's initial route was between Jersey City, New Jersey and Washington, D.C., but in 1941 the Columbian route was lengthened to Jersey City – Chicago, Illinois. It was the first air-conditioned train in the United States. 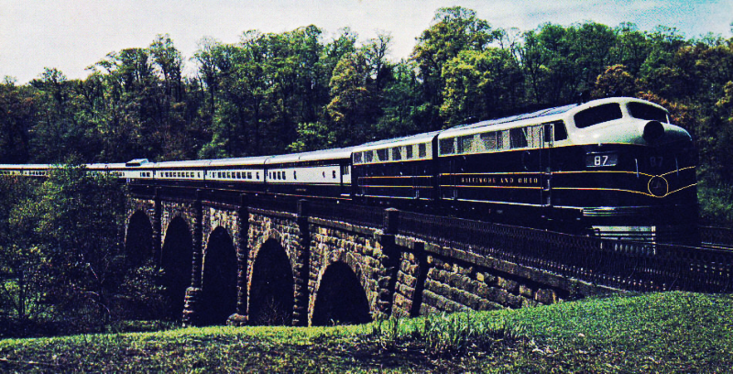 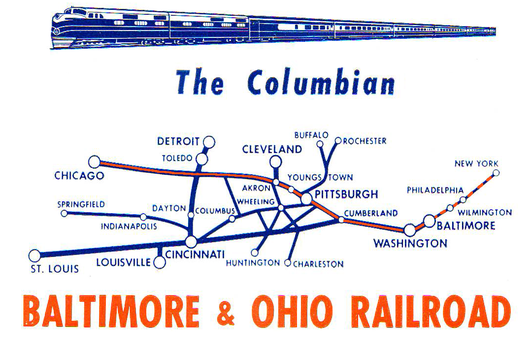 The 1950's saw a wave of consolidations as the B&O's passenger services contracted. The Columbian and Ambassador (which served Detroit, Michigan) began joint operation between Washington and Willard, Ohio on January 10, 1954. On December 1, 1957, the Columbian's dining car stopped operating west of Willard. On April 26, 1958, the B&O discontinued all passenger service between Jersey City and Baltimore, Maryland, and thereafter the eastern terminus of the Columbian was Baltimore. At the same time the Columbian and Capitol Limited began joint operation between Washington and Baltimore. On October 26, 1958, this joint operation extended all the way to Willard, ending the independence of both trains. The B&O dropped the Columbian name altogether on April 26, 1964.

The Baltimore and Ohio's "Columbian" passenger train in 1949.

In 1949, a brand new lightweight Columbian train set for travel between Baltimore, Maryland, via Washington to Chicago was built. The consists were ordered from Pullman-Standard for April, 1949 delivery and these two train sets have the distinction of being the only all-new consists built for the B&O in the postwar period. These two eight–car streamlined trains were the first trains in the eastern U.S. to be equipped with dome cars, the "Strata-Dome". Although the pair were intended as a daytime operation between Chicago and Baltimore by way of Washington the two new trains entered overnight service May 5, 1949. 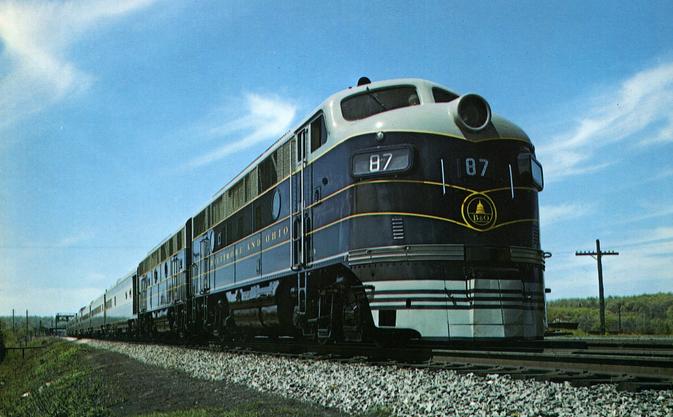 When Amtrak took over train service on May 1, 1971, the B&O's combined Capitol Limited – Columbian was discontinued, along with all other B&O long-distance passenger trains.

In December 1937 the Columbian received equipment originally rebuilt in 1935 for the Royal Blue. These were heavyweight cars given a streamlined appearance. The consist included a baggage-coach, three coaches, a coach-buffet, diner-lunch car, a parlor car which included a drawing room, and a buffet-observation car. The December 1941 re-equipping for long-distance service again involved refurbished Royal Blue equipment, although with long-distance-specific changes such as reducing the number of seats in the coaches. Each consist included a baggage-dormitory-buffet lounge, three coaches (each seating 45), a 46-seat coach with a stewardess' room, a dining car (room for 47), and a buffet-observation car. The B&O removed the buffet-observation cars in 1943. Diesel locomotives began handling the Columbian in 1945.

Pullman-Standard constructed two lightweight consists for the 1949 iteration of the Columbian. Each consist included a baggage-dormitory-coffee shop, four coaches, Strata-Dome dome coach, dining car, and tavern-observation car. Each coach could seat 56; the dining car had seating space for 36. The new Strata-Domes could seat 24 in the dome area (non-revenue) and 40 in revenue seating below, along with two lounges.

The B&O added two slumbercoaches to the Columbian's equipment pool in 1958: the Slumberland (No. 7700) and Dreamland (No. 7701). The Columbian lost its tavern-observation cars after it began join operation with the Capitol Limited.