Photo of the New York, New Haven and Hartford's  beautiful streamliner "The Comet", built by Goodyear-Zeppelin.

The exterior was machined aluminum in a whorled pattern with color bands of bright blue enamel at window height, dark blue enamel at wheel level, and a gray enamel roof. The whole exterior was covered with a coat of clear varnish to prevent tarnishing. The front ends were sharply raked, with a pointed "chin" pilot. 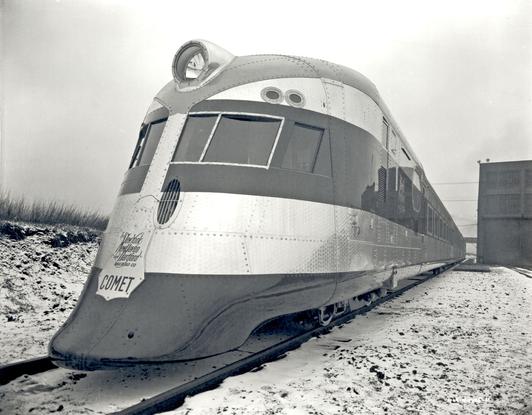 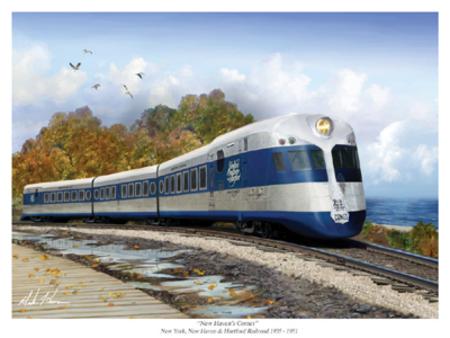 The Comet
The Comet was a diesel-electric streamliner built in 1935 for the New York, New Haven and Hartford Railroad by the Goodyear-Zeppelin Company. Smaller than the other streamliners, it was a three-car, double-ended train that could operate in both directions and thus did not need to be turned at destinations—ideal for the New Haven's cramped terminus at South Station in Boston.

It was initially placed into service between Boston, Massachusetts and Providence, Rhode Island on a 44-minute schedule; later, intermediate stops were added at Back Bay, Boston and Pawtucket/Central Falls, RI on an advertised "44 miles in 44 minutes" schedule. It ran 5 daily round trips on weekdays, and was often used for weekend excursion trips. This service lasted until the beginning of World War II, when increased traffic volume overwhelmed the capacity of the Comet, after which it was placed on local commuter services around the Boston area. The trainset was withdrawn from service in 1951 and scrapped.