Meanwhile, the A&WP, Western of Alabama, and L&N continued to run the Crescent between Atlanta and New Orleans. Each morning, the Crescent and the Southern Crescent departed Atlanta for New Orleans over different routes. After November 1968, the Crescent was a coach-only train sustained by two storage mail cars. With the discontinuance of the "Humming Bird" on January 9, 1969, it was run combined with the Pan-American south of Montgomery, leaving Atlanta at 7:15 p. m. on the old "Piedmont Limited" schedule. In 1970, with the mail contract cancelled, the Crescent was discontinued.

Southern Railway, a predecessor of Norfolk Southern, initially opted out of Amtrak in 1971. After May 1, 1971, Amtrak, assuming the services of the Penn Central, carried the Southern Crescent between New York and Washington. For a portion of the mid-1970s, Southern only operated tri-weekly between Atlanta and New Orleans, and carried a run-through Amtrak 10-6 sleeper on those days to connect to the Sunset Limited. On occasion, when the Southern deemed an Amtrak car to be unfit for the level of service that the SOU subscribed to, a Southern sleeper would be substituted in the consist. Also, one of the two dome coaches in the Southern car fleet was added for the leg south of Atlanta.

The Southern Crescent was one of the two last privately operated long-distance passenger services in the United States. The other was the Rio Grande Zephyr, which operated until 1983. But, revenue losses and equipment-replacement expenses forced Southern Railway to leave the passenger business and turn over operation of the train to Amtrak on February 1, 1979. Amtrak simplified the name to the Crescent, renumbering it 19 southbound and 20 northbound, although for several years the Southern assigned it operating numbers 819 and 820.

21st century
In its present-day form, the southbound Crescent leaves New York in mid-afternoon and Washington, D.C., in the early evening, passing through the Carolinas overnight for arrival at breakfast-time in Atlanta, lunch-time in Birmingham, and early evening at New Orleans. Northbound trains leave New Orleans at breakfast time and arrive in New York early the following afternoon.

The Crescent
The Crescent is a passenger train operated by Amtrak in the eastern part of the United States. It operates 1,377 miles daily between Pennsylvania Station in New York City and New Orleans Union Passenger Terminal in New Orleans, Louisiana, as train numbers 19 and 20. Most of the route of the Crescent is on the Norfolk Southern Railway. The Crescent passes through more states, including the District of Columbia, than any other Amtrak route.

History
19th Century
In the 1870s, the Richmond and Danville Railroad (R&D) — the predecessor of the Southern Railway — established the "Piedmont Air Line Route", which connected the northeastern United States with Atlanta and New Orleans via Richmond and via Norfolk Southern's present route through Charlottesville and Lynchburg. The Southern Express and the Southern Mail operated over these routes on an advertised time of 57 hours and 40 minutes, including a change at Atlanta.

On January 4, 1891, the R&D launched the Washington & Southwestern Vestibuled Limited, which connected Washington, D.C., and Atlanta and became the direct ancestor of today's Crescent. The brochure announcing the train hailed it as “a service second to none in completeness and elegance of detail ... providing all the latest and best facilities for the comfort and enjoyment of its patrons.” The Vestibule — so nicknamed because it was the South's first all-year train with vestibuled equipment — "lived up to its billing. Drawing-room and stateroom sleeping cars, dining cars, smoking and library cars, and observation cars embodied the latest, most luxurious designs. They were gas-lighted throughout and equipped with hot and cold running water. The vestibuled platforms proved an interesting novelty; many passengers spent considerable time walking from one car to another just to enjoy the unusual experience of being able to do so without having their hats blown away."

Soon the Washington-to-Atlanta routing expanded via the West Point Route from Atlanta to Montgomery and the Louisville and Nashville Railroad from Montgomery to New Orleans. New York City was brought into the schedule via a connection in Washington with the Pennsylvania Railroad's Congressional Limited. Scheduled time for the New York-to-New Orleans run was advertised as a "40-hour, unprecedented" trip. Because of the popularity of this service, the Vestibule became a solid train of walk-through cars between New York and New Orleans. It also carried the first dining cars to operate between those two cities.

After the R&D was succeeded by the Southern Railway in 1894, the train was called the Washington & Southwestern Limited southbound, and the New York Limited northbound.

Early 20th century
In 1906, the train was renamed the New York & New Orleans Limited and equipped with "club cars" and observation cars.

The train is referred to in the popular 1920’s railroad ballad Wreck of the Old 97, which describes the doomed train No. 97 as “not 38.” Number “38” was the operating number of the northbound New York & New Orleans Limited. No. 97 had operated over the same tracks as No. 38 between Washington, D.C., and Atlanta, and over the same trestle where No. 97 wrecked in 1903. The original songwriter was a Southern Railway employee, who certainly knew which train was No. 38.

The Southern Railway and Southern Pacific discussed the possibility of running a single train from Washington, D.C., to Los Angeles via New Orleans, which would have become the first truly transcontinental passenger train. The idea never came to fruition, but from 1993 to 2005,Amtrak's Sunset Limited was a transcontinental train running between Orlando, Florida, and Los Angeles.

According to railroad historian Mike Schafer: “By 1925, the train was re-equipped and renamed the Crescent Limited, a true all-Pullman extra-fare train. . . . By 1938 the name became simply the Crescent. It was dieselized in 1941 and streamlined in 1949. The Crescent also carried the through (coast-to-coast) sleepers of the "Washington-Sunset Route" in conjunction with the Southern Pacific west of New Orleans to Los Angeles.”

The 1954 schedule for the 1,355 miles from Atlanta to New York was 32 hours, 55 minutes. Passengers leaving New Orleans would arrive in Atlanta just after lunch time and in Charlotte, North Carolina, in the early evening. North of Charlotte, the train carried sleeper cars only and stopped only to discharge passengers. (Any passenger boarding north of Charlotte was destined beyond Washington, D.C.) Arrival in Washington was about 4:00 a.m., but a sleeping car was uncoupled there and passengers could sleep until a more reasonable hour. Passengers bound farther north would arrive in New York City in the morning.

Southbound, early evening departures from Washington (which had left New York in mid-afternoon) ran all-Pullman from Washington and arrived the next morning in Atlanta. Although the train carried coach cars (and made more stops) between Atlanta and New Orleans, it arrived in the early evening in the Crescent City to connect with the Sunset Limited for Texas and California. A through-sleeper sometimes ran in these two trains, creating a transcontinental Pullman service in which a passenger's sleeping accommodation ran from New York City (or Washington) all the way to Los Angeles.
As passenger service dwindled, the northbound Crescent was combined with the Peach Queen, with coach cars between Atlanta and New York. The southbound Crescent was combined with the Asheville Special and the Augusta Special, and included coaches between New York and Charlotte. It also carried "deadhead" coaches to Atlanta for the return north on the Crescent.

Late 20th Century
As Southern's railway partners sought to discontinue passenger services, Southern Railway rerouted the train to an all-Southern route and operated the train as the Southern Crescent between Washington, D.C.'s Union Station and New Orleans. The Southern Crescent inaugurated service in 1970 by combining two trains that had run separately between New York and New Orleans for decades: the Southerner, which ran over the Southern Railway only, between New Orleans and Atlanta via Birmingham; and the original Crescent, which had previously used Atlanta and West Point Railroad, Western Railway of Alabama and Louisville and Nashville Railroad trackage between New Orleans and Atlanta via Mobile. For the combined Southern Crescent, Southern moved the train to the Birmingham route instead of the Mobile route. This routing not only permitted the continuance of the train from Washington, DC to New Orleans; it allowed the Southern to maintain its passenger service standards and the dispatch reliability that inhered from moving the train exclusively over its own rails and system, from the start, to finish of its run. The train was numbered 1 southbound and 2 northbound. 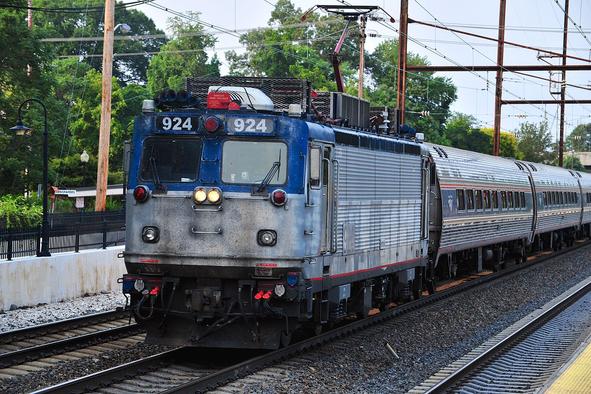 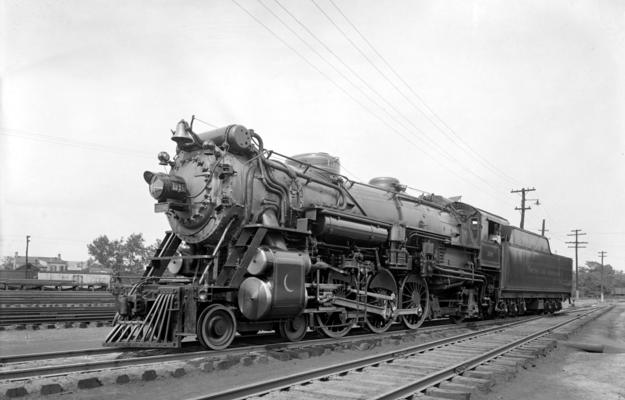 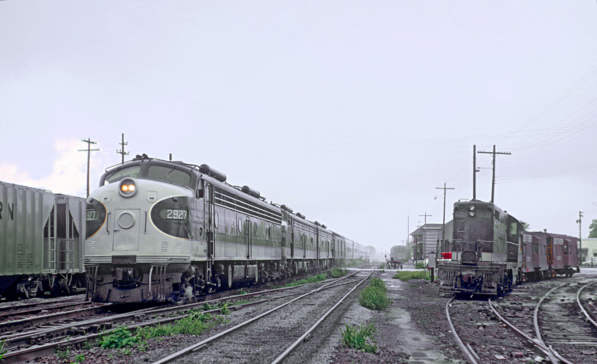 When Hurricane Katrina struck Louisiana, Mississippi, and Alabama in August 2005, the Crescent was temporarily truncated to Atlanta. Service was restored first as far as Meridian, Mississippi, while Norfolk Southern crews worked to repair the damage to their lines serving the Gulf Coast. Amtrak restored service to New Orleans on October 9, 2005, with the northbound Crescent's 7:05 AM departure; the first southbound arrival occurred later in the day.

In the January 2011 issue of Trains Magazine, this route was listed as one of five routes to be looked at by Amtrak in FY 2011 as the previous five routes (Sunset, Eagle, Zephyr, Capitol, and Cardinal) were examined in FY 2010.

The tracks used were once part of the Pennsylvania Railroad; Richmond, Fredericksburg and Potomac Railroad; and Southern Railway systems; they are now owned by Amtrak, CSX Transportation, and Norfolk Southern Railway, respectively. The following lines are used:

A usual consist on the Crescent is as follows: