Route Map of the Daylight Speedliner.

Unusual for RDCs, the lead RDC-2 car was configured by B&O as a combination dining car/baggage car/coach (pictured) offering full meal service, with the addition of a kitchen and six tables, listed in B&O's 1961 time table as a "refreshment diner". Two of these unique cars were built for the service; both survive today. One is on display at the B&O Railroad Museum in Baltimore, Md; the other is at the Danbury Railway Museum in Danbury, Conn. 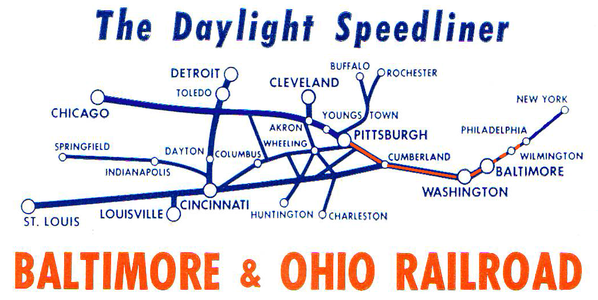 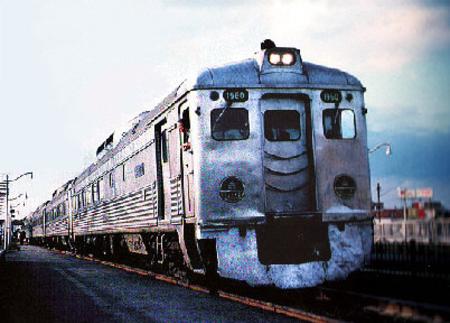 The eastbound "Daylight Speedliner" of four RDCs, at Silver Spring, MD on August 5, 1960, the lead car is an unusual baggage-dining-coach combine.

The Daylight Speedliner
The Daylight Speedliner was an American named passenger train of the Baltimore and Ohio Railroad (B&O) in the 1950's and early 1960's. Equipped with three or four streamlined, self-propelled Budd Rail Diesel Cars (RDCs) coupled together, it initially operated between Philadelphia, Pennsylvania and Pittsburgh, Pennsylvania, via Baltimore, Maryland, and Washington, D. C., as Trains No. 21–22.

The B&O had been using RDCs in local Baltimore–Washington, D.C., commuter service since 1950. Pleased with their reliability and lower operating costs compared to heavyweight passenger trains drawn by steam locomotives, the B&O decided in 1955 to replace its money-losing Washingtonian steam train with RDCs, ordering four RDC-1s with reclining coach seats and two RDC-2s with baggage compartments. The RDC-equipped Daylight Speedliner entered service on October 28, 1956, and reduced the railroad's operating expenses by almost half, compared to the Washingtonian train it replaced.

After B&O discontinued passenger service north of Baltimore on April 26, 1958, the Daylight Speedliner operated between Baltimore and Pittsburgh, covering the 333-mile route on a seven-hour schedule, until its discontinuation on January 21, 1963.