The de Luxe (meaning something luxurious, or elegant) started on December 12, 1911 on a seasonal weekly schedule between Chicago, Illinois, and Los Angeles, California. It was the first train the Santa Fe called "Extra Fast - Extra Fine - Extra Fare." It was conceived by company president Edward Payson Ripley as the Santa Fe equivalent to the renowned 20th Century Limited (New York Central) and Broadway Limited (Pennsylvania Railroad).

The trip took 63 hours each way and the sixty passengers paid a surcharge of $25 each way. Passengers could only board in Chicago, Los Angeles, Kansas City, or at Williams, Arizona (where those heading to the Grand Canyon boarded a train of the Grand Canyon Railway.

On arrival at Summit in Cajon Pass in California eastbound passengers were presented with orchid corsages (for the ladies) and engraved pigskin wallets (for the men). On the westbound run, ladies received a bouquet of flowers and a basket of California oranges, while the men got the usual wallet.

The de Luxe was not essential to the war effort and was withdrawn on May 1, 1917. 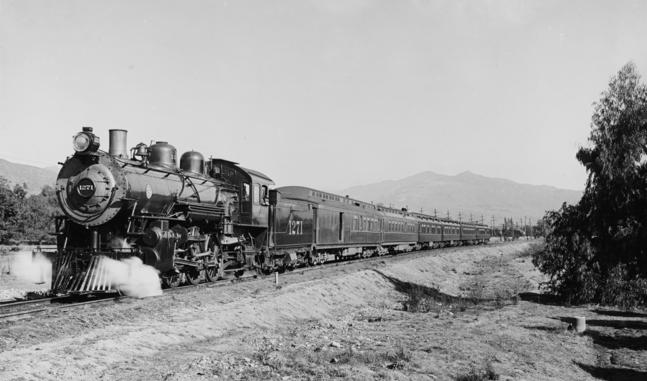 Equipment used
It took the Pullman Company almost a year to design and build the 12 heavyweight steel underframe cars of the two identical consists of the de Luxe. One was as follows:

The cars were lavishly furnished and had electric lighting. Drawing room passengers slept in brass beds instead of the usual berths.

The trains were pulled by 4-6-2 "Pacific"-type steam locomotives.