The Del Monte
The Del Monte was a passenger train run by the Southern Pacific Railroad. The train was formed in 1889 as the Del Monte Express. It began service to Pacific Grove, California on June 25, 1890. It ran until April 30, 1971, the day before Amtrak took over intercity passenger train service. The route of the train was from San Francisco to Pacific Grove. The tracks were removed in the 1980s in Pacific Grove and Monterey and the former right-of-way is now the Monterey Bay Recreation Trail. The former right-of-way in Pacific Grove runs between Lighthouse Avenue and Sunset Avenue. A narrative of the Del Monte‍ '​s cancellation from Tex-Mex musician Doug Sahm -- "The Railpak Dun Done in the Del Monte"—can be found on the 1971 Sir Douglas Quintet album, The Return of Doug Saldana.

Sadly, in 1948, the Del Monte Express fatally struck Ed Ricketts, a friend of John Steinbeck, while he was driving across the railroad tracks at Drake Avenue in Monterey.

Since the train's demise, many groups have tried to reestablish rail service to the Monterey Bay area. As of 2012 no such service has been made available. 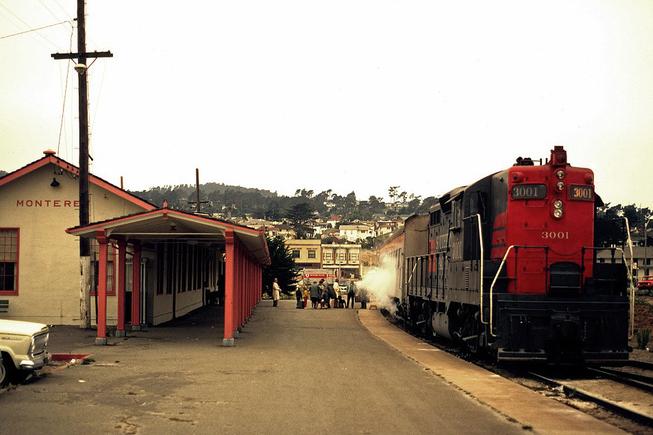 The Del Monte at Monterey in 1970.  Photo by Drew Jacksich.