With the 1956 re-equipping, the train also began to serve Colorado Springs. Sandwiched between the diner and the Chuckwagon, the section consisted of a coach, a slumbercoach, and a sleeper. These cars ran on the Denver and Rio Grande Railway's Royal Gorge passenger train between Denver and Colorado Springs.

Initially, the Chuckwagon operated with the section on to Colorado Springs, but, by the mid-1960s, to allow a longer service time between runs, the car ran only to Denver and a dome coach was substituted for the Chicago-Colorado Springs coach. On January 1, 1967, the Colorado Springs section was replaced by a bus connection.

Though the number of cars were reduced during the off-season, the train ran more-or-less intact until September 7, 1968, when the Chuckwagon became seasonal and the observation car, with its flat end and rear-diaphragm, became a midtrain lounge during the off season. The train was retained by Amtrak in May 1971.

The Zephyr under Amtrak
Amtrak took over in 1971 and decided to run the Denver Zephyr daily between Chicago and Denver. The Denver and Rio Grande Western Railway declined to join Amtrak, so the tri-weekly Union Pacific/Southern Pacific City of San Francisco was diverted from Cheyenne into Denver for combination with the Zephyr to Chicago. During the summer of 1971 the City and the Zephyr ran as separate sections (on the same schedule) between Denver and Chicago; after that summer the two trains were combined on the days the City ran. In 1973 the train began running Chicago-Oakland daily year-round and the name San Francisco Zephyr was applied to the combined train. For a few years thereafter the Denver Zephyr had its own column in the public timetable but did not exist as a separate train; eventually this ended and the Denver Zephyr name was relegated to the history books. Although the San Francisco Zephyr carried Chicago-Denver cars, these eventually dwindled to a single storage mail car. The Chicago-Denver Slumbercoachs were removed from the train in 1975 and reassigned to eastern trains. 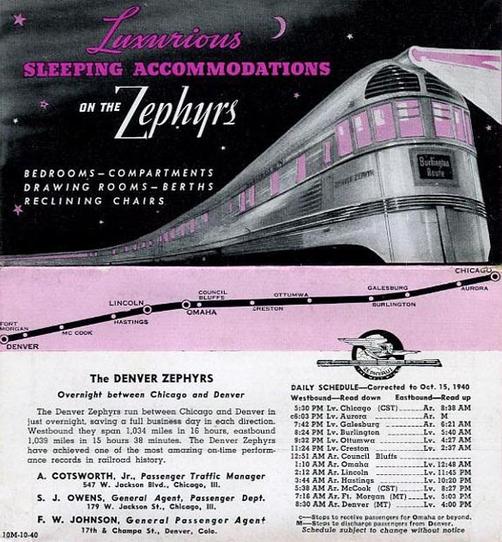 The CB&Q's 'Denver Zephyr' with the 'Silver Flash' observation car on the rear.

History
The first Denver Zephyr
After the success of the 3-car and 4-car Pioneer, Twin Cities, and Mark Twain Zephyrs, the Burlington ordered two pairs of longer stainless steel streamliners from the Budd Company. One pair was fully articulated 6-car trainsets used to replace the 3-car Twin Cities Zephyrs, freeing the two older trainsets for other duties. The other pair were 10-car trainsets, partly articulated, which became the Chicago-Denver Denver Zephyr. Accommodations on these trains included coaches, sections, single and double rooms, and dining and lounge facilities. The observation cars carried parlor seats for local travel. Until the addition of the Denver Zephyrs, the longest regular route of 882 miles was covered by the Twin Cities Zephyrs. Regular service for the route began May 31, 1936; by November 8 of the same year, the larger trainsets went into use.

The train ran 1,034 miles between Denver and Chicago overnight in 16 to 16½ hours. Within two years a dinette coach and an all-room sleeper were added.

On 23 October 1936 one of the new trainsets made a special run nonstop Chicago to Denver in 12 hrs 12 min 27 seconds. Distance was given as 1017.22 miles via the Plattsmouth bridge and direct to Lincoln, bypassing Omaha.

The trainsets were refurbished in the winter of 1948-49 and operated in DZ service until October 1956 when they were reassigned to the Denver-Fort Worth/Dallas Texas Zephyr route on Burlington subsidiaries Colorado and Southern and Fort Worth and Denver Railways.

The second Denver Zephyr
Around 1953 Union Pacific began re-equipping its competing City of Denver. In addition, the Burlington, Denver and Rio Grande Western, and Western Pacific Railroads had replaced their heavyweight Chicago-Oakland Exposition Flyer with a new streamlined California Zephyr carrying Vista-domes in 1949. Both of these trains took passengers from the DZ, but ridership remained respectable. But the train's consist — semi-articulated with a unique braking, steam connection system that was incompatible with other standard equipment — meant that cars could not be added to the train proper, but had to be added ahead of the baggage car or as a separate section. These cars needed their own food service, compromising the economics of adding the additional cars. The Burlington decided in 1955 to re-equip the train with more conventional non-articulated equipment. Thus was conceived the last complete streamlined train to be built for a private railroad in the United States.

The new stainless steel train, also built by the Budd Company, offered all room sleeping accommodations and, in addition to a full diner, offered a Vista-dome coffee shop car called the Chuckwagon. Parlor seats continued to be available in the observation car. Because of the popularity of the Denver-Chicago segment of the Vista-dome California Zephyr, the new train also carried Vista-Domes. In addition, a new all room sleeping accommodation, the slumbercoach, offered private sleeping facilities, with in-room washstand and toilet, to passengers at coach fares plus a small surcharge. These cars were revolutionary in their use of fiberglass room modules. Each train carried two and they always were sold out, even up to the beginning of Amtrak. By 1959 slumbercoaches would appear on the trains of four other railroads, although three would later give them up. Between 1959 and late 1964, CB&Q’s four cars and Northern Pacific Railway’s four cars were pooled in Denver Zephyr / North Coast Limited service. The pool required tight scheduling and good timekeeping and was discontinued when NP acquired eight additional slumbercoaches second-hand. Even though only 18 of these revolutionary cars were built new, they remained popular, even after operation of rail passenger service was assumed by Amtrak, and carried passengers until the mid-1990s, when age and changes in passenger car requirements forced their retirement.

The second Denver Zephyr began operation at the end of October 1956 and soon eclipsed its competitor, the Union Pacific Railroad's City of Denver. As the train now had conventional equipment it could be expanded with other cars of Burlington streamlined passenger car fleet as well as leased cars. During the summer months trains of 20 or more cars were not uncommon and during that and holiday seasons, the train often split into two sections. 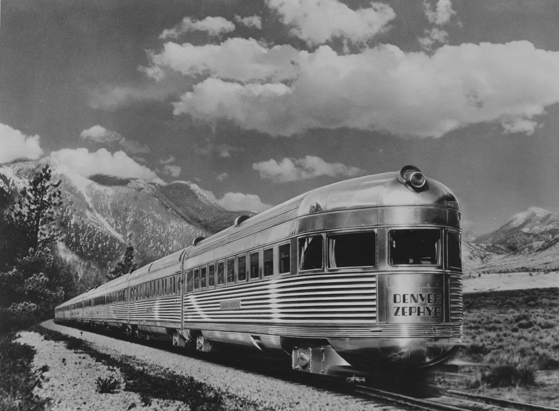