In 1899, the NC&StL made an agreement with the Illinois Central (IC) to handle passengers via the IC from Chicago and from St. Louis, via Fulton, Kentucky and Martin, Tennessee on the Dixie Flyer with limited stops and a fast schedule. In 1908, the Chicago traffic was rerouted via the CE&I from Chicago to Evansville, and the L&N from Evansville to Nashville; during World War I, the L&N also took over the traffic from St. Louis to Evansville. Soon after the war ended, the route south of Atlanta to Jacksonville was settled on the CofG to Macon and Albany, and from there via the ACL via Tifton and Waycross. In Jacksonville, through Pullmans were handed over to the FEC for Miami or to other ACL trains for Tampa and other west coast points.

At the height of the Florida land boom in 1925, the popular Dixie Flyer was split into three sections: the all-Pullman Dixie Flyer from Chicago/St. Louis to Florida; the coaches and Atlanta and Augusta sleepers were carried on the second section, named the Dixie Express; mail and express went by the third section, the Dixie Mail. Following the collapse of the Florida boom and the effects of the Great Depression, services were cut back in the 1930s, with the Flyer handling both coaches and Pullmans.

A short-lived Jacksonville-Yellowstone National Park Pullman route was created in the summer of 1925, carrying a sleeper via the Dixie Flyer to St. Louis, via the Wabash to Kansas City, and via the Union Pacific to West Yellowstone.

The Dixie Flyer was discontinued in 1966, like many other passenger trains a victim of plummeting ridership in the face of airline and highway competition.

The Dixie Flyer
The Dixie Flyer was a premier named passenger train that operated from 1892 to 1966 via the "Dixie Route" from Chicago and St. Louis via Evansville, Nashville, and Atlanta to Florida. The Flyer's route varied in early years, but by about 1920 was set as follows:

After the NC&StL acquired the lease of the Western and Atlantic Railroad in 1890, it began promoting its passenger business from northern connections through Tennessee, and in early 1892 christened its existing trains 1 and 2 from Nashville to Atlanta as the Dixie Flyer, with through Pullman Palace sleeping cars from Nashville to Jacksonville; these at first were routed south of Atlanta via the East Tennessee, Virginia and Georgia Railway (controlled by the Southern Railway), and later rerouted via the CofG and ACL.

Dixie Route brochure with timetables for the Dixie Flyer and Dixie Limited, circa 1930. 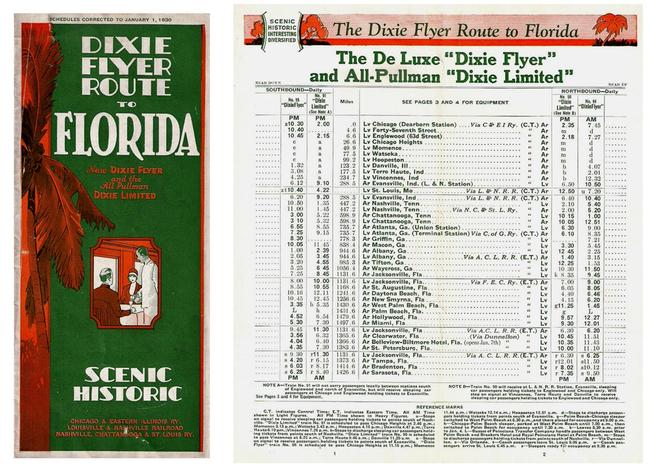