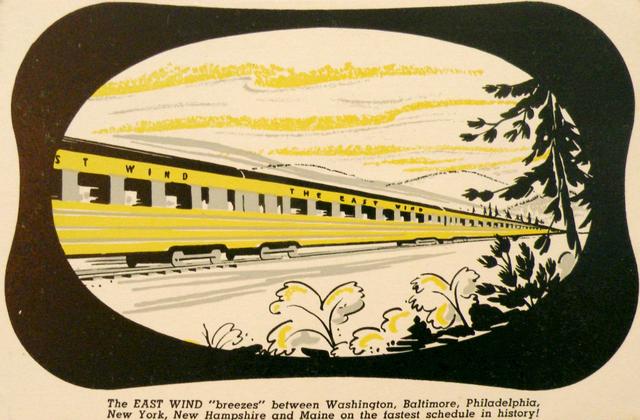 Postcard depiction of the seasonal passenger train The East Wind. The train originated with the Pennsylvania Railroad, but traveled on both Boston & Maine and New Haven Railroad tracks for part of its journey between Maine and Washington, D.C. via New York and Philadelphia.

The East Wind
The East Wind was a summer passenger train between Washington, D.C. and resorts along the southern Maine coast. Travel time was about 14 hours over the 700-mile route to Portland, Maine. The route was Pennsylvania Railroad from Washington, D.C. through Philadelphia to New York City, then New Haven Railroad to Groton, Connecticut where it left the Northeast Corridor to reach the Boston and Maine Railroad at Worcester, Massachusetts, whereby it continued northeastward, bypassing Boston. The train continued over the Boston & Maine to Portland, where a coach and diner continued to Bangor, Maine on the connecting Pine Tree Limited.

Equipment
Service started in June 1940 with two sets of pooled passenger cars painted yellow with a silver window band and pinstripes. Each train had an arch-roof baggage car, a dining car, and as many as 8 lightweight coaches. New Haven and Boston & Maine provided American Flyer coaches built in the 1930s by Pullman Company's former Osgood Bradley Car Company plant in Worcester. New Haven provided a similar grill car while Pennsylvania Railroad provided P-70 coaches and a lounge car. Similar service ran in the summers of 1941 and 1942.

Later years
The East Wind did not run during the summers of 1943, 1944 and 1945. Service resumed in the summer of 1946 without the distinctive paint scheme of the earlier years. Dining cars were sometimes leased from Atlantic Coast Line Railroad, or Boston and Maine or New Haven heavyweight diners were used. The New Haven diners were sometimes painted silver. The train ran for the last time in the summer of 1955.

Legacy
Guilford Rail System used the name East Wind in 1995 for a through piggyback service of semi-trailers on flatcars between Springfield, Massachusetts and Bangor, Maine.